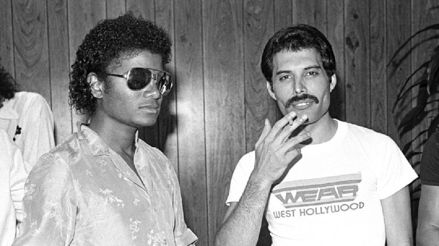 Two important exponents of pop and rock, Freddie Mercury Y Michael Jacksonalmost came together during the height of their careers as musical icons.

Freddie Mercury Y Michael Jackson they were synonymous with great musical exponents in the history of rock & pop at the end of the last century. Their great voices and incredible performances at each concert amazed more than one fan who had the privilege of attending a festival where these two music monsters participated.

Each one shone with its own light, both Michael Jacksonas a soloist, and Freddie Mercury, as the lead singer of the legendary band Queen. These two musical milestones, without a doubt, were the representation of success and glory when it comes to music. They got so high in their careers that at the height of their success they crossed paths and were on the verge of forming a dream band. But what happened?

Outside of rumors or speculation, these two singers met back in 1983, at the height of their careers. Michael Jackson, where I could pull off duets with any artist in the snap of my fingers. However, upon meeting Freddie Mercury at a concert which Jackson attended to see the British band Queen, I did not hesitate to seek to work with the interpreter of “Bohemiam Rhapsody”.

Thus, the two contacted each other and what was a gaseous idea became a reality, the musical icons came together and created several songs in Michael Jackson’s mansion located in California. For six hours, Michael Y Freddy locked themselves in a studio session to be able to record three important singles “State of Shock”, “Victory”, and “There Must Be More to life than this”, however, despite the great expectations of these three songs, only the last mentioned was officially released.

What happened to the duet between Michael Jackson and Freddie Mercury?

Everything led to believe that the work between Michael Jackson Y Freddie Mercury It was going to be a total success in sales, even the union between these two great musical exponents was presumed to form a “superband”, since the singles were not destined for an album by Queen or by jackson. Furthermore, it was said that there were internal conflicts between these two.

Years after the work between these two, Freddie Mercurywas consulted by an interviewer about some of these singles, mainly “Victory” and where this project ended, to which the Queen vocalist stated:

“Right, I did three songs with him, like a year or more ago. “Victory” was one of the songs, but he wanted to use it for the “The Jacksons” single, although the song is still there waiting for us to meet to finish it.

just as it says Mercury that, with the exception of “There Must Be More to life than this”, the other two songs were not fully finished and were waiting to be finished. However, the limited time of the two singers, between tours, concerts and others, did not allow for the realization of said musical product.

“We were never in a country long enough to finish anything. Michael called me to finish it (State of Shock), but I had commitments with Queen. Mick Jagger took my place. It was a shame, but in the end a song is a song As long as the friendship is there, that’s what matters.” He affirmed the now deceased vocalist of Queen.

Undoubtedly, a moment in the history of the world of rock & pop that will remain in the inkwell and will never be seen in the light, although many fans of the time expected these singles, and even the union of these two legendary singers within a so-called “super band”.

Did you know that Freddie Mercury and Michael Jackson almost formed a band together?