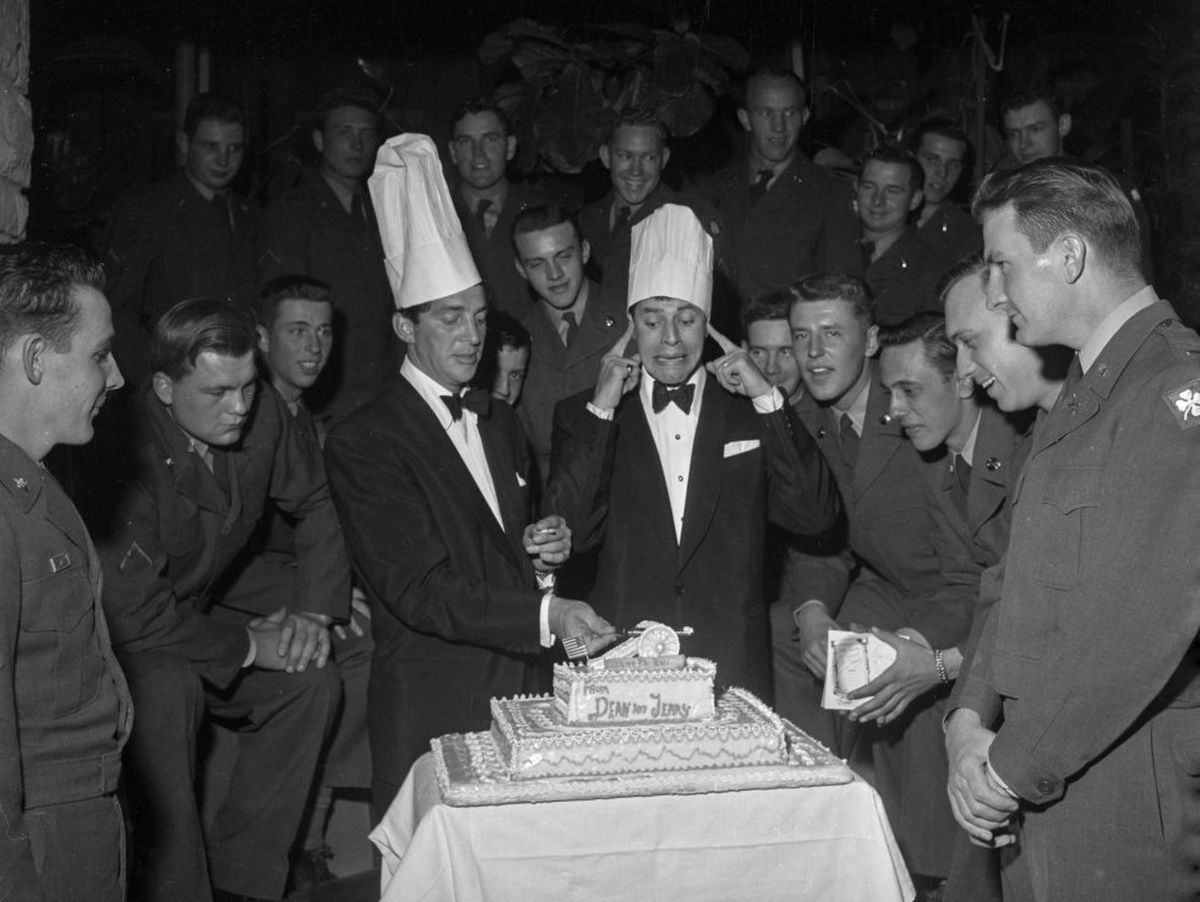 Nothing is more elegant than being authentic, and Dean Martin lo era. His paradoxical mixture of chivalrous nonchalance made him the absolute king of minimal effort. A good guy, joker, with a drink and a cigarette in his hand and a smile on his mouth. But make no mistake, when it came to getting serious, his codes were unbreakable: he was the only one in Sinatra’s Rat Pack who refused to attend Kennedy’s inauguration celebration for the veto imposed on Sammy Davis Jr. and his wife, the Swedish actress May Britt, for being an interracial couple. He was also more introspective than he appeared and a family man, so after the death of his son Dean in 1987 in a plane crash he never raised his head again.

Born in 1917 in Steubenville, Ohio, and died 78 years later at his home in Beverly Hills on Christmas Day 1995, Dean Martin had seven children and three marriages. His sense of family extended to the stage: he was a father figure to the comedian who launched him to stardom, Jerry Lewis, and a brother to the man who made him a fortune, Frank Sinatra.. The documentary Dean Martin: the king of cool, directed by Tom Donahue and premiered at Filmin, recovers the incomparable company of Dino Paul Crocetti, the son of an Italian barber who before dedicating himself to show business was a miner, plumber, dealer, taxi driver and boxer, a sport he abandoned when his nose was broken.

An admirer of the Mills Brothers’ way of singing, he began to perform in small venues around the country until 1946 when Lewis, a genius 10 years younger, noticed him. The tandem would last a decade and 16 films in which Martin would play the role of irresistible heartthrob and Lewis, the nervous clown. From that moment on, the cinema made him a world star. Television, with its popular The Dean Martin show, and his performances in Las Vegas would broaden his legend. We review his life through some of the most important films.

The young clown, alone and hyperactive, and the serene and handsome guy who can bear it and love it. In 1949, Martin and Lewis signed the contract with Paramount that launched them to stardom. His first film was My friend irma and overwhelming success followed. For Lewis, the only child of a dysfunctional family, Martin became the father he never had. In the book Dean & Me, released in 2005, Lewis unravels a bond that was never repeated with anyone, the pain of that break, the silence between the two for years and the final reunion. His first performance had been at the Atlantic City Skinny D’Amato’s 500 Club and the last a decade later at the Copacabana in Manhattan. That night, before going on stage, they wished each other luck: “Have a good show, Paul, ”said Lewis, who used to call him by his middle name. “You too, boy,” Martin replied.

Before leading to the famous Rat Pack, the relationship between Frank Sinatra and Dean Martin had started in style with this melodrama about a war veteran returning to his birthplace. Sinatra and Shirley MacLaine were the stars and Vincente Minnelli the director. According to Jerry Lewis, Dean Martin treated Sinatra with the same distance as everyone else, but Sinatra, like everyone else, liked to always have him around. The role was made to measure: a drunk gamer. From there, the relationship with Sinatra replaced that of Lewis and Sammy Davis Jr, Peter Lawford and Shirley McLaine would complete the circle of music, nightlife and casinos that their new family, the Rat Pack, popularized.

It may not have been the best idea to face off with two of the best actors in history, Marlon Brando and Montgomery Clift, but Martin started with a wise advantage: that of not competing. Is about an anti-war film from filmmaker Edward Dmytryk, one of the Hollywood Ten and one of the first singled out for Senator McCarthy’s witch hunt. With his ability to attract lonely souls, Dean Martin established a good friendship with Montgomery Clift, who was dragging the trauma (and addictions) derived from the fatal accident that destroyed his body. It was Clift who helped him hone his acting technique.

Bravo River changed Dean Martin’s career. One of the great westerns in history and with a huge cast: John Wayne, Angie Dickinson and Walter Brennan. In the role of Dude, a deputy sheriff (how Wayne looks at him!) Trapped by alcohol, teasing and self-pity, Martin got his best job in a movie that included a musical number with another singer, young Ricky. Nelson. Martin interpreted My Pony, My Rifle and Me lying down and with the brim of his hat covering his face, with that natural elegance that is so much his. He would act in other westerns, especially two wonders by Henry Hathaway, Katie Elder’s four children (1965) and The poker of death (1968), but Bravo River it places it in the Olympus of the genre.

Jon Hamm says (Mad Men) in reference to the Rat Pack at a time Dean Martin, The King of Cool: “These were the men who defined the masculine attitude.” The gang of eleven, in which the remake Steven Soderbergh (and its sequels) with George Clooney, Brad Pitt and Julia Roberts, it was a buddy flick, and it shows. The story of a group of WWII comrades in arms planning to rob five of the biggest Las Vegas casinos brought together everything the Rat Pack loved. Martin would repeat with some of his casino colleagues in all kinds of genre films, from All in one night (1961), con Shirley MacLaine, a Three sergeants (1962), Four Chicago gangster (1964) and She and her husbands (1964), again with MacLaine.

The remake of My favorite woman, by Leo McCarey, stayed in about 35 minutes and a sad epilogue to the career of Marilyn Monroe. It was her last and unfinished film, 20th Century Fox fired her from the project due to her continuous absences, including that of the famous Happy Birthday dedicated to President Kennedy. It was Dean Martin, who had known her long before, who demanded that the studio reinstate the actress; without her, he too was leaving the project. The studio backed down, but Marilyn was found dead shortly after at her Brentwood home. At least the famous pool sequence remains together.

Although it did not have the success of other of his films, Kiss Me silly it’s so funny and scathing like any comedy written by Wilder with his co-writer IAL Diamond. At the time, it was considered too risque, but today it is a classic in which Dean Martin offers a great self-parody. His character is called Dino and he is a singer with a reputation as a conqueror who ends up with his broken car in a lost town called Climax. There he will meet a composer and piano teacher obsessed with Beethoven (Ray Walston) and a somewhat dumb and stunning waitress, Kim Novak.

Burt Lancaster, Dean Martin, Jean Seberg, Jacqueline Bisset… and the king of disaster movies, George Kennedy. In 1970 Airport inaugurated a genre that mixed flashy casts with megalomaniacal disasters. Martin plays the pilot of a plane carrying a bomb here. Faced with the enormous success he had achieved on television through his program, The Dean Martin show, his career in the cinema began to languish, participating in increasingly harmless films. His last hits were the comedies of the eighties The Cannonball Fools and his crazy car races across America.