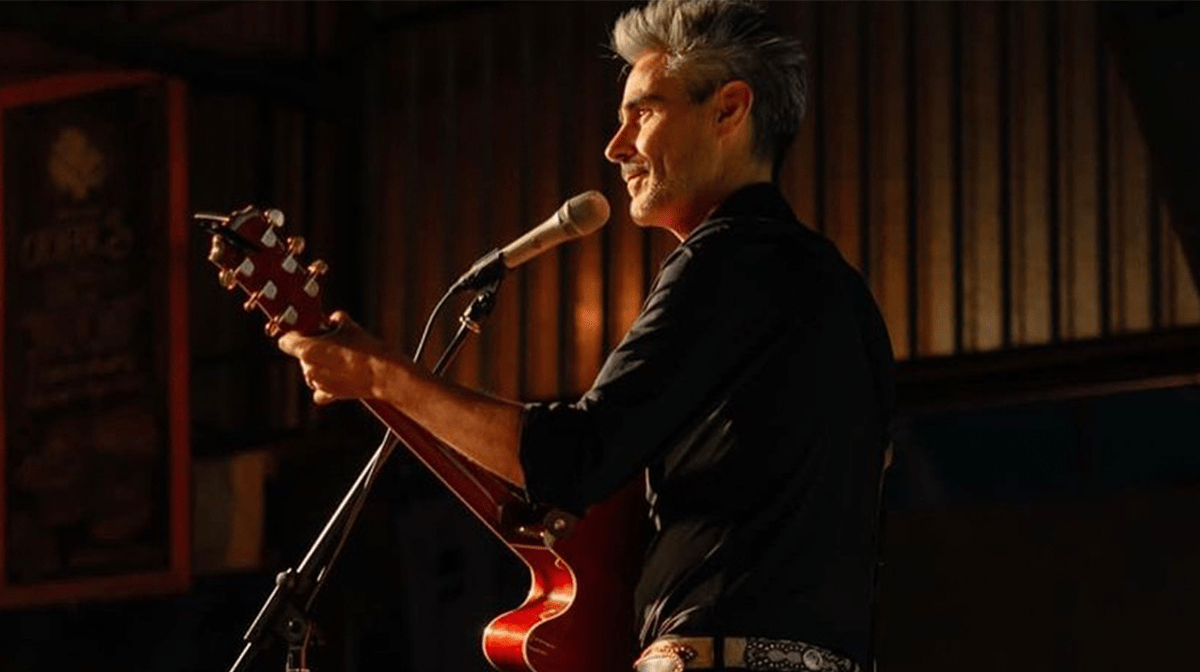 We spoke with Daniel Gutiérrez, musician, composer and vocalist of the popular rock band, La Gusana Ciega. In an interview he told us about how he started his path in music and what his biggest dream is.

Daniel is passionate about music, especially rock, he began to play the guitar when he was 15 years old, realizing that it was his passion, he decided to venture into music in a cover group and it was at 18 when he decided to form his own rock band “The Blind Worm “.

For the Mexican artist it has not been easy to earn a place in rock, however, every day he puts his greatest effort to pursue his dreams.

“I have wondered many times if I am really achieving what I want, but there is an internal fire that continues to burn and does not allow me to stop doing it, I have questions but the next day I get up and think of solutions, that is why we are still here, there is that I want not only mine, but my team, to share a dream and have goals in common with them, finding ways to follow is what keeps us alive ”, says Daniel.

We asked him about how his love for rock was born and when he decided that he wanted to dedicate himself to music and have his own band and he replied:

“In 1989 I went to my first rock concert in Spanish, I started listening to rock from bands that were sounding more like, Soda Stereo, Fobia and Caifanes, and I started to like it, at that time there were not many massive concerts until the beginning of the 90 ″.

It may interest you: Gustavo Cerati: the hero who died twice

“At the UVM in Lomas Verdes I went to a concert by Soda Stereo, and that night I decided that I wanted to be like that, when I heard Cerati sing and Soda play the songs I felt that they were touching me, Cerati had her heart in her hands, it was a very deep and shocking connection and I said I want to be that person, I want to do what he is doing, I went home and on the way I wrote two songs in my head, then I went to the rehearsal room with the cover group and told them you have to compose… ”.

“I would like to be Cerati and reach that level of recognition.”

The Blind Worm It was created at the end of the 80s and since then it is a Mexican popular rock band that has been growing year after year, in 1996 they managed to record their first album Merlin, and over the years they were gaining popularity for the success of their songs and concerts. Currently, the independent band has gained more strength with their recent releases, such as “Dark Gray” and “Start from Zero”.

The band is made up of Daniel Gutiérrez (vocalist), Germán Arroyo (Drums) and Luis Ernesto Martínez Novelo (Guitar), We asked Daniel what is the key for the group to continue together pursuing their dreams in the world of music and he replied that despite being different they have learned to be a team and pursue their dreams with the same enthusiasm with which they started and With the same love, this has been the way in which they have carried their band forward regardless of the obstacles that arise and the years that have passed.

“We are three musicians and very different people but we have things in common, that is what gives life to the songs, being able to learn to be a team, respect, tolerate, be empathetic with the other person and learn the value and contribution of each one in the team, we have learned all these tools along the way and they have us on stage having an incredible time ”.

“La Gusana Ciega has almost 10 albums, it is a story of success, of human courage and teamwork, sharing and pursuing dreams. We still have the dream that we are going to be famous and we continue to pursue it with the same desire, we have fun and we have a good time, and that does not mean that everything is rosy but we know a little how to handle our differences and the project, Challenges are present in any race, there will always be obstacles and filters, if you don’t want it enough it will make it difficult for you to fulfill your dreams ”, he added.

In el Tour 2021, The Blind Worm he sang on stage the hits that have marked the lives of his fans as the theme Pasiflorine a song with a great sentimental message or “Greatest”, “1987”, Tornasol, among other topics, in addition to his recent singles such as “Sweet and sour”, inspired by the people who died in the pandemic.

A The Blind Worm It is characterized by the feeling and meaning of each of its lyrics, as well as the music that makes each of its fans vibrate on and off the stage.

“There is something in the songs that reaches people in important moments of their life, it is that music that you found and that was not thrown at you, you needed to find that message or melody and it stays with you in a deeper way, the fans they stay with us because it becomes a special moment in their lives when they sing La Gusana’s songs at concerts, they sing them because they want to say something when they sing them ”.

Daniel told us that what he enjoys the most is playing live, being in front of the people and listening to them sing the songs bringing them to life with the band’s musicians. “It is a magical and special process, I like composing, but it takes me a lot of work, I wonder if it will be that good or not, it excites me because I can express myself but I enjoy playing more.”

“The dream and desire to get on stage and sing my songs and have people sing them I always keep in mind.”

The artist Daniel Gutiérrez is aware that the legacy he will leave The Blind Worm in the world of rock it is going to be different and it will leave a meaningful message that will last generation after generation.

In addition, he revealed to us what his biggest dream in music is. “I hope to make a song that has a massive impact, like “Imagine”.

In the midst of the pandemic, the band that has been independent since 2015, had to adapt to the changes in the music industry to stay current and not stop sharing their music with fans.

“When the pandemic arrived, we thought it was going to be a few months but it wasn’t, we started to see how to do concerts, we did dynamics with our fans so that they could interact. In addition, we did a live streaming so as not to lose contact with them and we reinvented ourselves to develop new strategies and stay current ”.

“If you do not reach the top of the pyramid it does not mean that you will have failed, you have to take your project to its maximum potential and be aware of your dream,” says the vocalist.

Finally, he told us that the new album is coming, it will be in mid-February 2022 when they will release a new song and at the beginning of March the long-awaited album will be released, in addition, they will be presented at Vive Latino that same month.

Keep reading: TWO ROCK STARS WHO WERE BORN ON THE SAME DAY

Daniel Gutiérrez, the lead singer of the rock band you have to listen to