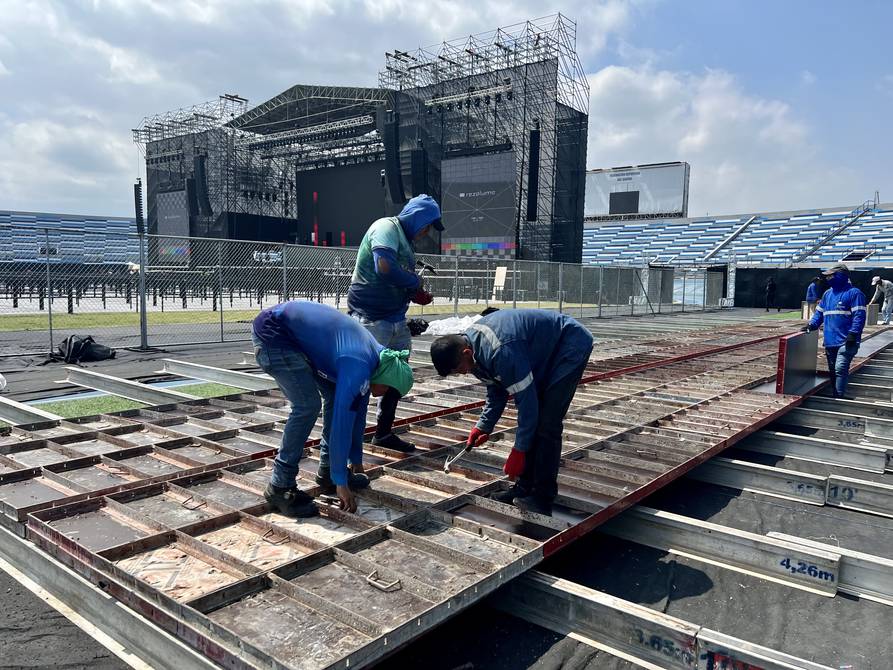 This Tuesday, October 4, Guayaquil will experience one of the most anticipated concerts of the year. After passing through Argentina, the singer daddy yankee He plans to arrive in Ecuador this afternoon to present his show tomorrow ‘The last lap world tour’ in the stadium Alberto Spencer Model Stadium.

There will be no parking spaces in the stadium; Everything you need to know if you go to the Daddy Yankee concert in Guayaquil

THE UNIVERSE talked with Moises Barrios, project manager of this concert, who gave details of the logistics that have been prepared to guarantee the safety and quality experience that has been promised so much Live Productionsorganizing company of the show. “Please come very comfortable, avoid bringing objects that are targets of theft so that you are safe”, Barrios said.

“We are taking all the correct measures so that security is the maximum and we can offer you a quality concert”affirmed the manager in a live conversation with this newspaper.

The entry of people to the stadium will start early; the doors will open at 15:00, Barrios confirmed. Well, according to the provisions, each attendee will go through three filters: one to validate the tickets, another for the distribution of seats and the last one to finally enter the stadium.

For Daddy Yankee’s concert in Guayaquil, a businessman guarantees security, but asks that attendees collaborate to avoid incidents

“The first filter consists in which the person who is going to enter or go through the first door is only the person who has a physical ticket. Ballot validation will be done to see if it is real. Once you pass that filter you will find the lane with nine access points, where I know will read the QR code where we will validate again that the ticket is correct and that it was acquired through authorized channels. After this we will go to a second filter where the distribution of seats will be done… the last filter will already be inside the stadium”, Barrios detailed.

mentioned that the appearance of the ‘Big Boss’ on the Guayaquil stage is scheduled for 9:00 p.m.. Before the Colombian Beele will be in charge of opening the concert. In addition there will be special guests by Daddy Yankee.

remembered that Central Tickets no longer have tickets for sale. “We had a few passes but the event is already sold out”, declared and added that only on the first day, 17,000 tickets were replaced from digital to physical tickets and that less than a thousand tickets have not yet been replaced. He advised avoiding buying resold tickets.

The manager stated live for this newspaper that security will be made up as follows: around 400 private security personnel, 250 logistics people and additional the National Police has provided approximately 100 officials who will be collaborating outside and inside the stadium.

To prevent people from skipping seats, as happened at the Wisin y Yandel concert in Guayaquil, Barrios showed the fences and walls that are being installed in the stadium. “We are going to have a significant amount of fencing, with division between the localities; high walls to prevent people from being able to access this from moving from one locality to another…”, said.

“We are creating oxygenation zones in the stands so that people are calm. That the agglomeration is not a reason to generate discomfort”, he added.

As had already been announced this morning on social media, the parking service in the stadium will not be available. In this way, people who attend with their vehicles must park in one of the authorized areas near the stadium. “Together with the authorities, we have worked on several workshops. ATM Guayaquil has given us 100% support to set up parking areas near the stadium”, Barrios confirmed.

“There will be no parking inside the stadium for security. They must understand that this is not with the desire to inconvenience them, but on the contrary, to be able to provide them with security. Our suggestion is that if they come by car, locate it in a good nearby area and try to come the largest number of people inside the vehicle, within what is allowed, so that they can take advantage of the space. Nevertheless, if they can come by public transport it would be ideal”, express.

He said that the access point will start at Avenida de las Américas with Ernesto Naboa. “The experience of Daddy Yankee will begin there, there we begin with the tour to enter the stadium access filters.”

According to an ATM mobility map, published on the Central Tickets social networks, there will be 6 parking areas around the stadium with ATM personnel. A area will be located on Av. Kennedy, on the Bottle; another will be up to the task Pedro Gual Avenue; Near Colegio Aguirre Abad there will be three parking areas: one in the Eloy Ortega Sotoother on Free Suffrage Avenue and another in the Eduardo Moncayo street. In the Avenue Miguel H. Alcivar will also have a parking area available.

For this, the ATM has arranged to close the streets for automobile circulation, so that people can travel on foot.

The organizers emphasized that “The production of the concert is not responsible for damage, theft and/or inconveniences with their vehicles”. (YO)

Daddy Yankee will arrive in Ecuador this afternoon; these are the measures that the organization takes to safeguard security | Music | Entertainment