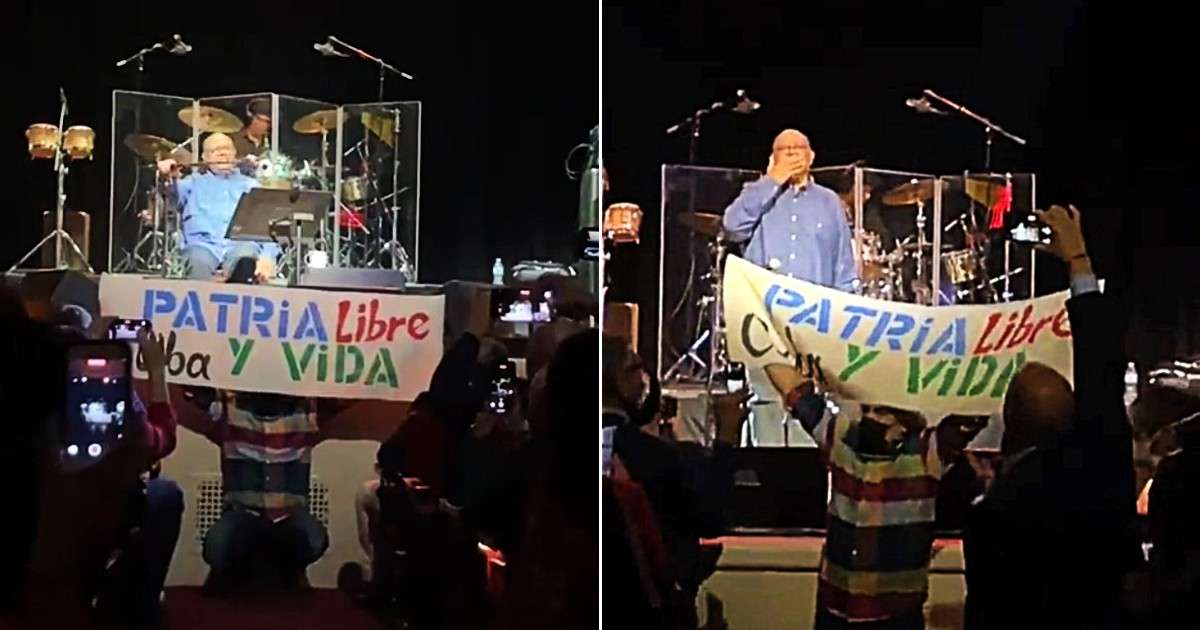 The public gathered this Saturday in the concert hall of the Town Hall, in New York, to listen to the concert of the Cuban troubadour Pablo Milanes, placed a poster supporting the freedom of Cuba at the foot of the stage and shouted Homeland and Life repeatedly during the show.

Fragments of the end of the concert shared by the journalist José Raúl Gallego on his social networks, gave testimony of the majority commitment of the public to the freedom of Cuba, expressed with shouts of Viva Cuba Libre, and Patria y Vida.

A poster that read this “slogan” of Cuban civil society was placed at the foot of the stage, just below the place occupied by the troubadour, who did not show anger or discomfort with the message on the banner.

After the last song and while Pablo was leaving the stage, many Cubans stood up and shouted Patria y Vida, and waved the poster they had placed. In the fragments shared by the independent journalist, it is not appreciated that there have been reactions from supporters of the regime within the concert.

The concert in New York this Saturday is part of a tour of the troubadour through five cities in the United States, a country in which he offered his last performances in 2011 and in which he has performed at least twice on its stages.

The concerts scheduled in the United States are part of the tour started by Pablo in several Spanish cities under the title “Díaz de Luz”. This Sunday night in Washington will be the last of the five concerts that made up the artist’s American poster.

Begun in San Francisco on October 16, the tour included performances in Los Angeles (October 17); Pembroke Pines (Broward County, 21); New York (on the 23rd) and will culminate this October 24 in Washington.

Pablo Milanés, 78, has returned to the American stages after a decade of absence. Remembered and controversial was his presentation in 2011 at the American Airlines Arena (AAA) in Miami as part of the tour “Propositions: unique, historical, iconic”.

This concert generated notable controversy among Cuban exiles, some protesting against his art for considering it part of the symbolic production of Castroism and others speaking in favor of allowing him to sing. Something similar to what happened with Silvio Rodríguez’s recent concert in Madrid.

However, the distance between the ideas of both artists around the so-called “revolution” has been manifest for years, although without ever settling in a public controversy or radical disagreement.

After the historic 11J protests, the troubadour expressed his support for the demonstrations that took to the streets of Cuba to freely express their discontent against the government. In addition, he described the repression unleashed by the regime against the population as irresponsible and absurd.

“It is irresponsible and absurd to blame and repress a people that has sacrificed and given everything for decades to support a regime that in the end what it does is imprison it,” Milanés said in an official statement, in which he also recalled that since For a long time he has denounced “the injustices and errors in the politics and government” of Cuba.

“In 1992 I was convinced that the Cuban system had definitely failed and I denounced it. Now I reiterate my pronouncements and I trust the Cuban people to seek the best possible system of coexistence and prosperity, with full freedoms, without repression and without hunger, “said the musician living in Spain, in a statement in which he expressed his confidence in the young people to achieve a better future for Cuba.

On December 31, 2020 Milanés premiered “Waiting for the miracle”, a song that he himself defined as “musical epilogue of everything suffered and felt in this time”, In reference to the coronavirus.

The musical structure of the theme has religious evocations and can be interpreted as a prayer, a plea or supplication that invites us to reflect on the moment that Humanity is living and to meditate on a future that, despite everything, the musician glimpses in a hopeful way.