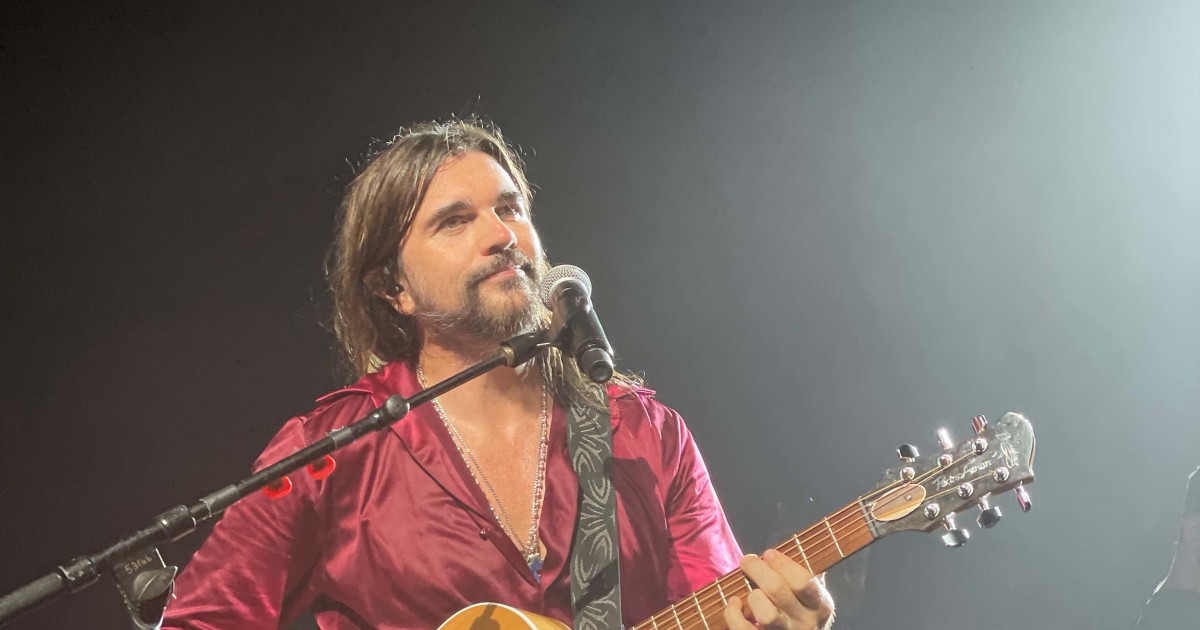 MIAMI.- “I want you to see with your ears.” With that impossible proposal, Juanes received his fans in the first two concerts of his “Origen” tour, which started in the city of Miami this weekend.

“We have spent a lot of time glued to the screens, now that we are all here together, I want us to enjoy in another way, using other senses,” said the Colombian singer-songwriter, who spent much of the pandemic visiting the songbook of his life, since his childhood. It is precisely those themes that he found in his memories and that he included on his most recent album the ones he used to build the backbone of his fantastic return to the stage.

To facilitate the process of seeing with the ears, Juanes eliminated excess visual stimulation in his show. “I wanted to go back to how concerts were before, with good musicians, good sound equipment and lights and that’s it,” the artist explained to the Los Angeles Times in Spanish when he announced the tour.

“When I returned to my musical origins, it seemed the moment to fulfill the dream of offering my songs without so much production.” That means zero screens, zero dancers and zero display of costumes and set elements. He didn’t go as far as banning cell phone use, as some old rockers have done in the past, but he did think about it. “It would have been fabulous, but I didn’t dare,” he admitted.

And the thing is that with “Origen Tour”, Juanes offers his essence in every sense and that is how he wants it to be perceived by the public, to whom he came very close when interpreting some pieces from the corridors, accompanied only by his guitar. In the two-hour show, he barely offered one stage concession: a raspberry velvet suit, reminiscent of the psychedelic era of the 70s and which he combined perfectly with his long hair and carefully unkempt beard.

The concept worked in such a way that an informal consultation we did among several attendees of the two shows at the iconic Fillmore Theater found that only one in 20 noticed the absence of the giant screens. It is a “vintage” concept that could revolutionize how great Latin artists perform live. “We have gone through a time in which we wanted everything bigger, more explosive, more shocking for the public’s senses, but the truth is that the musical relationship is intimate and the situation in the world with the pandemic has forced us to reflect now reinvent ourselves. Sometimes the solution is to look back and see what worked before things got so complicated ”,

The repertoire was as expected. Great hits like “A Dios le pido”, “La camisa negra”, “Es por ti” and others, were woven around the songs of “Origen”. They cannot be called new, as they are versions of hits from the past, including some heavy rock that he performed in Spanish with novel arrangements that brought them closer to tropical rhythms.

But although the general public received them all with enthusiasm, the madness was reserved for the best-known themes of Juanes and others. “I have no money” by Juan Gabriel made everyone dance. The same happened with “Bubbles of love”, for which he had the collaboration of his friend and neighbor Fonseca. Both Colombian artists live in the exclusive Key Biscayne area, a residential key connected to Miami by a bridge that spans Biscayne Bay.

This October 17 marks 21 years since Juanes released “Fíjate Bien”, his first studio album. With him he won three Latin Grammys and became one of the most recognized stars in the constellation of Latin artists. It makes sense that with that professional coming of age, he feels free and inspired to connect with the public with his great musical loves. In this case, however, it is proven that the tango player Carlos Gardel was wrong and that 20 years are many. The Juanes of 2021 is more than a star, it is a whole constellation. His voice sounds the same as the first time we heard it, the 50 years that he will turn in August 2022 have not even been shown by his physique and the mastery with which he plays the guitar would have already placed him in the Rock’n’Roll Hall of Fame if I sang in English.

His lifelong fans, and even the most recent ones, will not be disappointed by the concert of his tour “Origen”, which arrives in California on October 2 at the YouTube Theater in Los Angeles, on October 3 at the Municipal Auditorium of Riversaide, the October 6 at SOMA in San Diego and October 7 at The Observatory in Santa Ana, CA.

The only complaint is that it fell short of exploring that concept of music from the past. It would have been fun to see the rest of the looks she showed in the video for the songs on the album “Origin”. Maybe that’s why there is a lack of an exhibition in the Grammy museum.