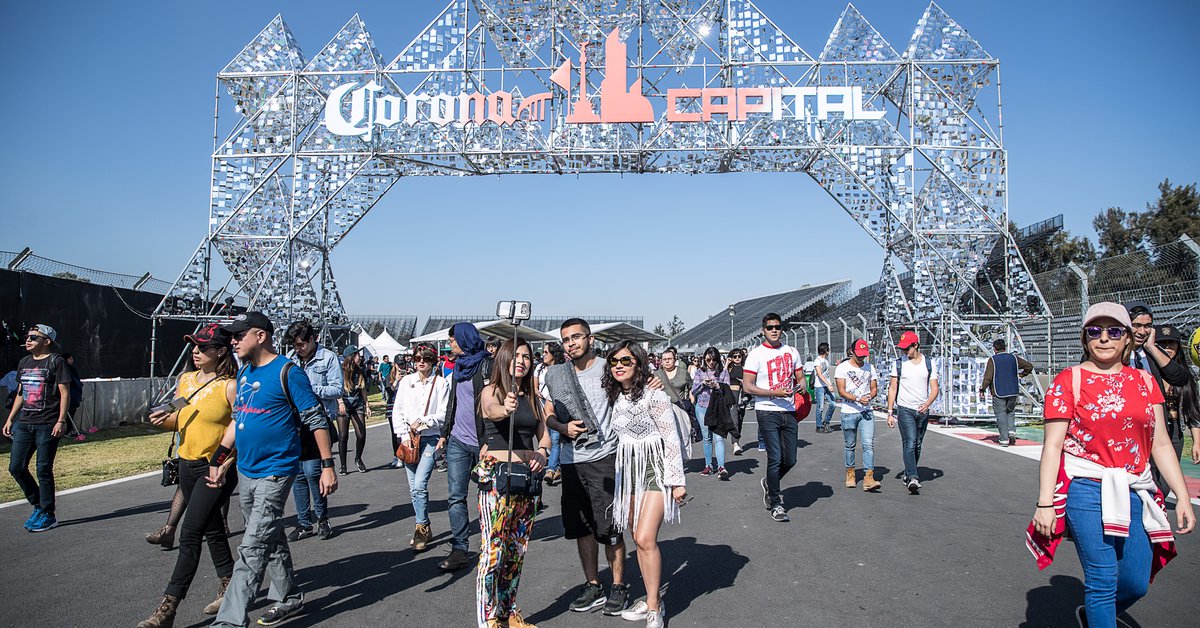 Tweet
Share
Share
Pin
The 2021 edition of the festival will be carried out with sanitary measures and the mandatory presentation of a negative result or vaccination card (Photo: Ocesa)

This Saturday, November 20 and Sunday, November 21, Mexico City will once again host the Corona Capital 2021, after a one-year absence due to health restrictions caused by COVID-19.

This event will be the second in the capital that has no capacity restrictions since the pandemic began, after the Formula 1 reported full capacity during the race on Sunday, November 7, on a weekend that reached the 371 thousand 779 fans during the three days that the Grand Prix of Mexico City.

On this occasion, the Secretariat of Citizen Security (SSC) from Mexico City published a statement in which they announced the safety and road operation that the Iztacalco mayor’s office will carry out for the two days of the Crown Capital.

Corona Capital 2021 will have a special security device and accesses with sanitary protocols (Photo: Twitter / @ CoronaCapital)

Regarding the security elements that the mayor’s office will deploy, it is about 1,161 police officers, supported by 58 official vehicles, nine cranes and an ambulance, who will carry out actions to prevent illegal acts and administrative misconduct.

Additionally, the staff of the SSC will carry out road works to guarantee the free movement of motorists and pedestrians; as well as the control of parking on the access roads and during the eviction of the Hermanos Rodríguez Autodrome at the end of the event.

Despite these exercises to improve traffic, traffic congestion is expected during concert hours, especially when the event ends, scheduled for 0:00 am, with eviction until 1:00 am, both on Saturday and Sunday.

The SSC recommends the following roads to motorists as alternatives in case of damages at the beginning and end of the event:

Regarding the schedule of public transport prepared for the two days of Corona Capital 2021Neither the Metro Transportation System, Metrobus, nor RTP announced special schedules for the event, so it is expected that they will end their activities according to their usual schedules.

The Metro and Metrobus will be available until 12 midnight on both days, in addition to The operation called “Safe Return” was not disclosed, with which they enabled public transport with hours until 2:00 am in other editions.

This year, around 60 thousand people are expected to attend the Corona Capital 2021 (Photo: Ocesa)

The stations you recommend Crown Capital to enter the event are the following.

In case of arriving in Metro, within line 9 (brown) is where the three recommended stations to get off are located: Velodrome, Sport City and Puebla.

On the other hand, if the event will be reached through the Metrobus, the recommended stations to get off are those located on line 2 (purple), UPIICSA and The rodeo.

There are only two access doors: Gate 7 and Gate 15Therefore, you are invited to plan access before heading to the Hermanos Rodríguez Autodrome.

There will be parking for cars with limited capacity and it will be through Gate 15. It is recommended to arrive well in advance to reach a place in the designated spaces.

Remember that it is only possible to access the property once. Subsequently, you will not be allowed to re-enter the same day if for any reason you have to leave.

Corona Capital 2021: these are the transport and safety recommendations