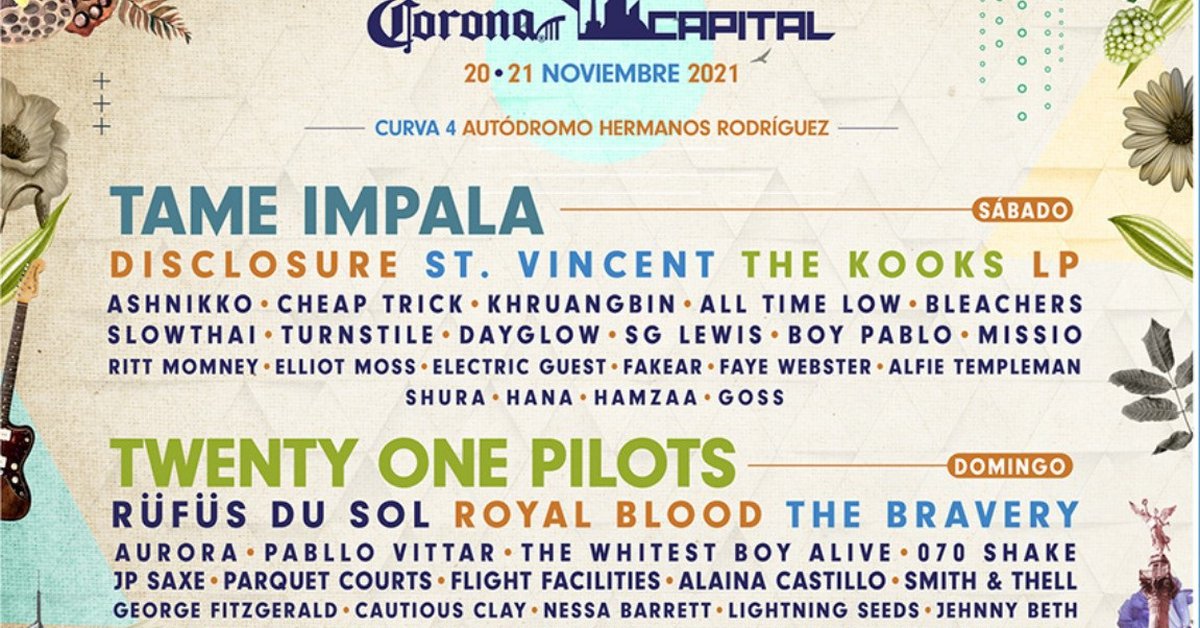 Last year, the music festival Crown Capital it was seen forced to postpone its 10th edition until 2021 due to the COVID-19 pandemic that paralyzed the world of entertainment globally.

However, this year the poster with which they plan to make their big comeback was revealed. In this edition of Corona Capital, even some of the bands that had to cancel concerts in the city last year will come, as was the case with Tame Impala.

The first version of the poster was filtered by Aurora music through an Instagram story. However the Crown Capital already confirmed the full lineup of the festival, which will be dated November 20 and 21. The presale of the tickets, on the other hand, will be launched this September 16 and 17.

With less than 30% of hospital beds occupied, Mexico City returned to the yellow traffic light, with which the Head of Government of the capital, Claudia Sheinbaum, announced that mass events will return. Not only the Corona Capital, but also Formula 1 will have a return to the city.

The last massive event in the city was the Vive Latino of the year 2020. This occurred when there were already cases of COVID-19 in CDMX, however, the severity to which the pandemic was going to reach in Mexico was not yet foreseen.

From that moment on, various events and concerts began to announce that they would be postponed or canceled. One of them was Corona Capital, which published on its social networks the news that “It is with sadness that we announce that the 2020 edition will have to be postponed to 2021. The most important thing for us will always be your health and safety ”.

As part of the prevention measures against the coronavirus (Conavid-19) in the Vice Latino 2020, attendees and staff of the Hermanos Rodríguez racetrack, use face masks, use of gloves, antibacterial gel and even in some accesses the use of a body thermometer. (PHOTO: MARIO JASSO /CUARTOSCURO.COM)

The announcement concluded with a promise: “We are sure that we will return and we will unite again around what we are most passionate about: music ”.

Another event that was canceled last year was the Tame Impala concert. The event was originally scheduled for July 22 at Foro Sol. The first to decide not to attend the concert were the American singer-songwriter Clairo, followed by the MGMT band and, finally, Tame Impala gave the final announcement.

The Tame Impala concert was on the occasion of the tour for Kevin Parker’s new album, The Slow Rush. Tickets had already gone on sale, and people who had their entry pass had to request the refund of money a Ocesa, which did not take long to return it to its clients.

Now, Tame Impala will make a return to the city in the framework of Corona Capital 2021, from the hand of Twenty One Pilots. Both groups occupy the main place on the poster.


Saturday 20, along with Tame Impala, will play bands like Disclosure, St. Vincent, The Kooks and LP, among others.

On Sunday they will be presented, as a sample, Twenty One Pilots, Rüfüs Du Sol, Royal Blood, The Bravery. That day will also be Aurora, the artist responsible for filtering the first version of the poster from Corona Capital through their Instagram stories.

Some rumors prior to the confirmation of the poster spoke of other guests such as Tyler the Creator, who released his new album Call me if you get lost, just a few months ago. OR Doja Cat, who just released his new album Planet Her. However, none of their names appeared in the lineup for Corona Capital 2021.

Corona Capital and F1: with social distance, the CDMX welcomes mass events
These are the concerts and festivals canceled or postponed by COVID-19 in Mexico
After having performed the Vive Latino, Ocesa canceled all its events until April 19