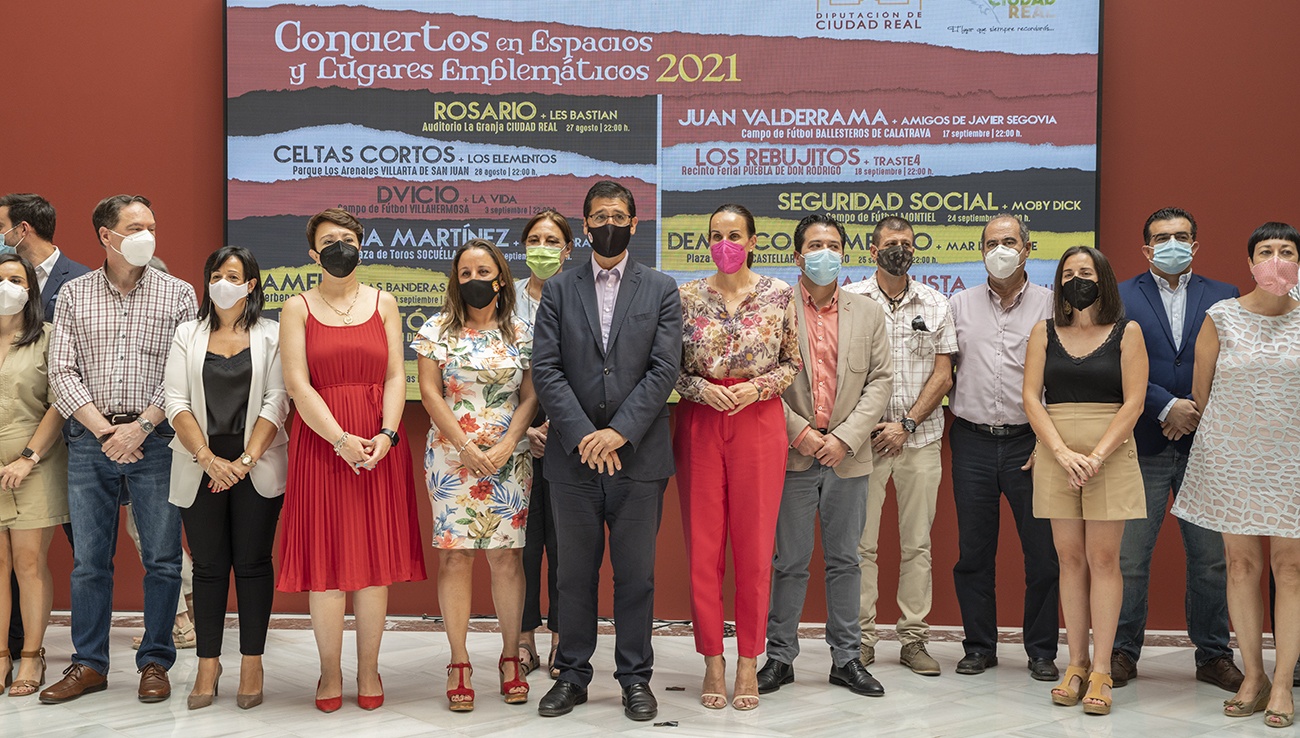 There will be twelve performances in which national groups and other local groups will play as opening act. They will start with Rosario in Ciudad Real and will perform, among others, ‘Celtas Cortos’, Blas Cantó, Juan Valderrama or ‘Seguridad Social’. ‘Moby Dick’, ‘The Viboras’, Mar del Norte or Javier Segovia’s friends will be among the provincial bets

Help the culture sector -especially music- to its economic reactivation and promote the tourist potential of the province of Ciudad Real. It is the double objective that the Provincial Council pursues with the cycle Concerts in Emblematic Spaces and Places, this year in its fifth edition with twelve sessions.

José Manuel Caballero, president of the institution, this morning defended the initiative for what it means in the advance towards normality after the pandemic, and for the ‘kick’ of illusion that will take the citizens of the twelve towns where they are going to develop, in addition to the new solidarity character with donations for charities.

The preservation of health is the main purpose, according to Caballero and, therefore, the capacity will be limited to the recommendations of the health authorities at each moment and municipality. Anyway, at the end of August, he has calculated, 80% of the population of Ciudad Real will be vaccinated with the two guidelines.

In the presentation, Caballero has launched a “message of confidence”, in the face of other disturbing announcements, and has called for responsibility “, given the possibility of” being able to enjoy “the concerts, at the same time” that we continue in the fight against the virus so that it does not cause havoc ”.

In addition, they will allow “people who live off culture to do so in dignity”, with “economic income and the applause of their followers”.

Regarding the second pillar of the cycle, referring to the promotion of spaces, Caballero has highlighted “the enormous potential of the tourist offer that unites history, heritage, traditions and celebrations”, and that is part of the integral Tourism Strategy implemented by the entity.

The funding has been 320,000 euros, in addition to another 400,000 euros from the ‘Vuelve la cultura’ program, a sector “that has a healing power for the soul and is enviable.

Caballero also highlighted the solidarity character they have given to the new edition of the emblematic concerts, with a donation of two euros for non-governmental organizations linked to the territory, which will serve to reserve the place in the performances.

They can be done through the digital inclusion points (PID), which will be attended by staff after the imminent publication of the call for monitors for 24 months.

He has estimated that they will be “a success” and has invited the public to get to know these spaces by attending the musical performances.

The deputy for Culture, David Triguero, has announced the concerts of the fifth edition, since they have been held since 2016, with the exception of 2020.

They will start with Rosario in Ciudad Real on August 27, preceded by ‘Les Bastian’, on the occasion of the commemoration of the IV Centenary of the capital. In Villarta de San Juan, the festivities of “Paces” will be valued, in honor of Our Lady of Peace and the Roman bridge on August 28 with ‘Short Celts’ and the opening act ‘The elements’. While in Villahermosa the grebes, La Nava, the Blancha lagoon and the church of Nuestra Señora de la Asunción will be promoted with the concert of ‘Dvicio’ on September 3 and the local group ‘Life’.

India Martínez will do the same the next day in Socuéllamos with the opening act ‘The Viboras’. They want to make visible the urban fabric of the municipality, the landscape of La Mancha, the vineyard and the La Mancha plain. The Chillón concert, scheduled for September 10, will be performed by ‘Camela’ and of ‘The Flags of Agnes’ to publicize the Virgen del Castillo sanctuary and the church of San Juan Bautista and Santo Domingo de Silos.

For its part, in Carrión de Calatrava the presence of the opening act ‘Despacito y al Compás’ and of Blas Cantó has been scheduled to unveil the Sanctuary of the Incarnation and the castle of Calatrava the Old next September 11, as well as September 17, in Ballesteros de Calatrava, to promote the Virgen de la Consolación church, the Campo de C volcanic massifalatrava Y the Palace of the Serna. Will act Juan Valderrama and ‘Friends of Javier Segovia’.

In Puebla de Don Rodrigo the concert of ‘Los Rebujitos’ and of ‘Fret’ It will take place on September 18 and the aim is to enhance the Abedular del Río Frío and the Meandro de Guadiana. In the same way as on September 24 with ‘Social Security’ Y ‘Moby Dick’ in Montiel to make visible the Medieval Montiel and the Castillo de la Estrella.

On this occasion, the town of Castellar de Santiago has also been included, which will spread the parish church and the baroque carving of the Christ of the Mercy and the Sierra del Cambrón on September 25 with the concert ‘From Marco’ and the opening act ‘North Sea’. In Ruidera they will have the presence of ‘Funambulista’ Y ‘Mejor Kallaos’ on October 1 to remember the environmental value of the Lagunas del Rey, La Colgada, Cueva Morenilla, Cenagosa and La Coladilla, as well as El Hundimiento. And in Daimiel las Tablas and Motilla del Azuer with the performance of Manuel Blanco.

The mayor of Ciudad Real, Eva Masías, thanked the “enhancement” of culture with the musical initiative, which will also serve to support “local artists.” In the same way, “the economy, the hotel industry and tourism are activated” and “the space and the terroir” are promoted.

Masías has also been optimistic about the security guaranteed with the prevention measures.

For her part, the mayor of Castellar, María del Carmen Ballesteros, thanked the cycle and the cultural promotion, at a time still pandemic in which the authorities have had to “exercise their imagination.” It has also valued the call for concerts in view of “the need” to enjoy artistic manifestations, while at the same time reactivating “the economy, the hotel industry and commerce”.

María Luisa Villafranca, on behalf of the NGOs and president of Rosae, thanked the cycle that “combines heritage, music and coexistence”, an activity “full of culture”.

He has listed the twelve entities (one per location) that will benefit from the donations in the concerts, including Solman, Autrade, Afanion, Fundación Patricia Jiménez, Cáritas, Afas or Castillo de la Estrella and who work in different areas, such as the disability, cancer or estate recovery.