The Mayor of Móstoles, Noelia Posse, and the Delegate Councilor for Celebrations, David Muñoz, accompanied by the Spokesperson of the Municipal Group Podemos, Mónica Monterreal and the president of the Federation of Peñas de Móstoles, David Zamorano, presented this morning the program of the town’s Patron Saint Festivities, declared of regional tourist interest and which this year under the slogan “Móstoles has returned”, will be held from September 3 to 13, 2021. The Town Crier of the Festivities was also present at the event. the playwright and stage director from Mostole, Félix Estaire.

During the presentation, the Mayor indicated that this year, although the health situation has improved with mass vaccination, there will be a special program reduced and adapted to current circumstances, in which prudence and the absence of all those activities that make it difficult to control accesses and gauges. For this reason, some of the traditional acts such as the running of the bulls have been postponed, since the current regulations of the Community of Madrid prevent them from being carried out.

The program has the support of the Festival Committee and the Board of Spokespersons, who have contributed their collaboration and have shown their confidence so that the Holidays are celebrated taking into account the reality of the situation that exists at the moment.

The Mayor has indicated that “the Ministry of Health has authorized the Móstoles City Council to organize the most massive events that make up the program, such as those in which the participation of more than 600 people is expected.”

“We have made a great effort among all the departments involved in the Festivities, both the administrative ones, the Security Forces and the maintenance teams to achieve a safe, decentralized Party that reaches all and all the people of Mostole”, added the Mayoress.

In addition, he has highlighted the support of Móstoles to the fairgrounds, to whom the City Council has not charged the installation fee of the attractions, in another gesture of the Local Government for not leaving behind those who are experiencing the worst as a result of the Covid- 19. Likewise, it has made known the person who will read the proclamation of the Festivities, who will be the playwright and stage director from Mostole with a brilliant career, Félix Estaire.

Finally, the first mayor has asked the Mostoleñas and Mostoleños “precaution, respect and caution in a festival in which despite the fact that vaccination continues its course and is showing that it works, the virus is still present and Móstoles must continue to be the example of city that has demonstrated during the hard year that we have passed, and that we owe to our essential health workers and workers ”.

Regarding the programming of activities, the Councilor for Celebrations, David Muñoz, has detailed the events that are going to take place from next September 3. The Festivities will officially begin on Friday, September 10 from 8:30 p.m., with the proclamation and the chupinazo in the Plaza de España. Previously, from 5:00 p.m. in the Plaza de la Cultura there will be static giants and big heads, with which those present will be able to photograph themselves and upload the photos to social networks.

David Muñoz has highlighted the pyrotechnic show, on September 11, at 11:30 p.m., as well as the attractions for all audiences at the fairgrounds. The days 9 and 10 of September will be called Children’s Day, where they can make use of the attractions at the price of € 1.50 each. Those same days, from 5:30 p.m. to 6:30 p.m., music and noise will be at the lowest volume so that children with functional diversity can also enjoy.

In the chapter on concerts, the City Council has sought to take the performances to more neighborhoods of the municipality. Nuria Fergó, Raya Real, Locoplaya, India Martínez, Monster Rock and Queen for Kids for the little ones, as well as the performances-tribute to Elvis, Mecano, Raphael and Sabina make up the musical shows. The bullring (September 3, 4 and 4 at 9:00 p.m.), the Plaza del Sol in Pau-4 (September 10, 11 and 12 at 8:00 p.m.) and the Pradillo square, They will each host three concerts (10, 11 and 12 September at 10:00 pm), designed for different audiences.

As is traditional, religious acts usually have a prominent place in the festive programming. On September 11, the Floral Offering to Our Lady of the Saints will be held in the Hermitage. On the big day of the festivities, September 12, the feast of the patron saint of Móstoles, a Solemn Mass with limited capacity will be celebrated at 11:00 a.m. in the Hermitage, where there will also be a static procession with images at 8:00 p.m. of the patron and of San Simón de Rojas.

On Friday 10th and Monday 13th of September there will be a theatrical route on Our Lady of the Saints by the School of Volunteer Actors of Móstoles.

On September 13, a holiday in Móstoles, at 10:30 p.m. on the athletics track of the Andrés Torrejón Sports Center, a nighttime drone show will be presented.

In addition, two sporting events will be held, such as the VII National Open of the City of Móstoles (September 5 at 12:00 h) and the “Móstoles en Marcha contra el Cáncer” race (September 19 at 10:00 h).

The party program can be viewed or downloaded in full from this link. 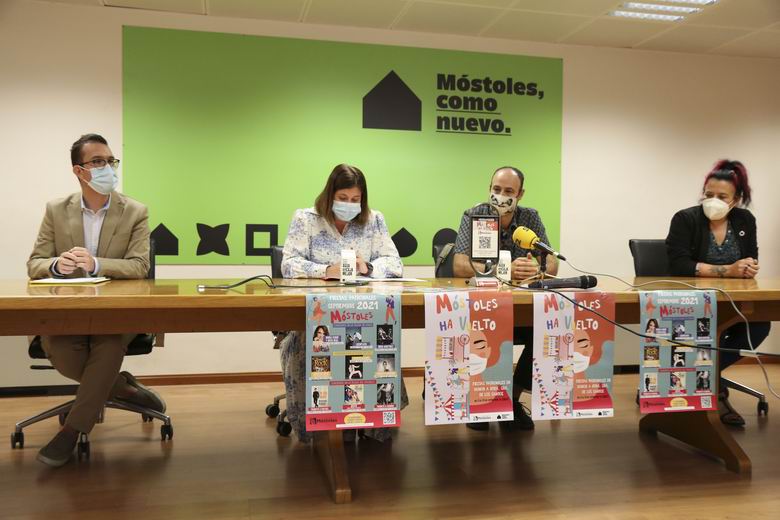