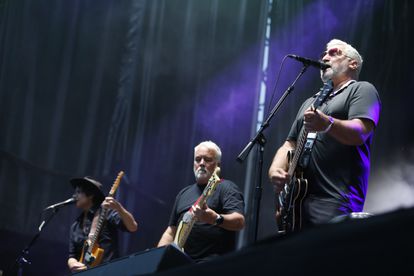 what you ask the azkena (which has been held in Vitoria from June 16 to 18) is that there is at least one memorable concert, because otherwise you know that everything will work. It is a friendly, comfortable festival that takes over the center of the city during the day. Seen the seen, it is already almost familiar. Accompanied minors under 14 enter for free (they expected 600, twice as many as in 2019, finally there were 800) and baby strollers mix with rockers who left retirement behind some time ago. The director of the contest jokes saying that this is “indoctrination” and he is not misguided.

There was desire, especially this year. Vitoria recovered the festival after two years of pandemic hiatus and it gives the impression that apart from the usual ones —those who come every year with religious fidelity from Almería or Pontevedra, and enter the Mendizabala venue kissing the ground—, a large part of the city, rocker or not, passed through the venue at some point. There was no full house, almost never has been at this festival, but the attendance record has been about to be broken: 48,000 people in three days; 3,200 in the campsite provided by the organization.

Camping this year had merit. If something fails the venue, it’s the shade (and the prices of drinks? Five euros for a kalimotxo, bosses? Is it reserve wine?) and drove the sun forcefully. The heat wave devastated a city accustomed to the opposite. Some call it Siberia-Gasteiz. But there was joy, the desire is the desire, and even the 39 degrees were carried with dignity.

Everything started normally, at cruising speed, but that unique concert that reminded us of the 20th anniversary edition resisted. Thursday didn’t arrive, nor did almost anyone expect it from the punk party of Offspring or Toy Dolls. On Friday, Alkoholika Society he did a concert for his parish, numerous, yes, they played at home, but only for his own. Social Distortion didn’t get away either. The stars of the night give the impression that more out of necessity than anything else, they were Afghan Whigs. Their concert served to remind us how compact they are, but also that they don’t seem to have composed a memorable song since 1996, on a par with the amazing version of Can’t Get Enough of your Love Baby, by Barry White, which was included on the soundtrack of beautiful girls and that, of course, in Vitoria did not sound. Quite the opposite of Ilegales, who closing Friday night showed how many amazing songs they have written and one wonders if Jorge Ilegal shouldn’t have been on the big stage and the Whigs on the small one. But hey, those are things that come to mind only after seeing it.

It was Saturday, which woke up with a directly unbearable heat. In addition, the weather threatened a storm due to a Dana that appeared from the Bay of Biscay and arrived that night just as far as Vitoria, which is already bad milk. Knowing what happens in this city when the temperature drops very suddenly, one was expecting that at any moment the concert area would be swept away by a typhoon and this would become a chronicle of events. Spoilers: it didn’t happen

The only thing that the first downpour achieved, at about six in the afternoon, was to add good humidity to the environment, turning the venue into the Basque version of the tropical heat. So it seemed that the war was going to be between monsoon rain and rock and roll. It’s okay, we’ve come to play. And at Azkena there have been fabulous concerts in the rain (for example, one by Chris Isaak in 2010).

It seemed to have cleared when Israel Nash came out, which sounds like Graham ditto, although no affiliation is known between the two. The Texan is unquestionably a great musician and gave a concert as beautiful as a video of kittens and just as transcendent. Clouds and clears when Emmylou Harris appeared, who is a queen and behaved like one. She has a beautiful voice and an incredible poise, but she decided to do a very quiet recital and at that point we had such an overdose of country melodies that we wanted to get on a horse and look for a herd of cows to take them to the watering hole.

then came Patty Smith, that when appearing on stage he said (so you can see that this chronicler is not the only one obsessed with the weather): “I think the weather has been kind to us.” And so much. It was getting dark, we were at 25 degrees… that’s what he promised. At that time a little New York electricity was just what we needed after so much southern placidity. And that’s what they gave us. From the first moment it was clear that Patti Smith had come to give everything. She had plenty of energy. And we are talking about a 75-year-old lady. The first memorable moment came when she announced that it was the 25th anniversary of the poet’s death. beat Allen Ginsgerg and read Holy (footnote for Howl), one of his poems. Let’s see Smith she is an artist and she would be reciting the shopping list, but in that context and with the Ukrainian flag on stage, it sounded like a celebration of life. The concert did not stop growing. In concept it is simple, the band at the service of the boss and the boss at the service of her litanies. If it works, why change it? they had already sounded Round Beach either Dancing Barefoot and the thing was on track with the band sounding great and the audience delivered. It had cost this year, but we already had the big festival concert. Then, she also seemed to notice. For a second her voice failed him. She took a deep breath, yelled in Spanish “la vida, la vida!” and she confirmed what the night was about.

He took a break while his group honored Paul McCartney, who was turning 80, with a version of Helter Skelter and chained her I Wanna Be Your Dog, by The Stooges. He came back to dedicate a song “to Captain Jack Sparrow”, that is to say to Johnny Depp, but at that point you forgave him everything. Especially when later he performed a wonderful One Too Many Mornings by Dylan in honor of Emmylou Harris. From there, it only remained to plug in the direct one: Because The Night Y horses of the pull And to the hotel, it’s late. She was ready, she had reserved five minutes for an encore that was, of course, People have the power. Then Emmylou Harris took the stage to do the choirs and from behind the stage there was a flash of lightning. In addition to the festival concert, we already had festival time. Too bad there is no official photo of that moment.

To lower the high, nothing more suitable than Black Mountain, with its leaden psychedelia to invade Poland. After a while, you realize that you don’t care and remember that at some point you have to have dinner. The temperature was already rebequita. Finally something that fit with what Vitoria is.

Only the final fireworks remained: Suzi Quatro’s was a nostalgic show with chorus girls and wind instruments that would not have been bad if it weren’t for the fact that neither we nor she are in 1972. If it were just a recital of hits, it would be fine for a cruise. Daniel Romano’s Outfit, From which much was expected, he made a messy concert that goes very fast for no apparent reason. Two sing all the time, the guitar doesn’t stop playing even between songs and if the drummer’s hand is tied behind his back, nothing would happen. Michael Monroe, with his great hair, his lycra and his rock full of New York Dolls clichés, was a more than worthy closing for the festival. Everything very tidy, very neat, very Nordic.

I was leaving the venue and there was already a queue at the organization’s stand where the subscriptions for the next year were announced. It will be June 15, 16 and 17, 2023. I can assure you that several hundred people have already noted the date. Fidelity was this.