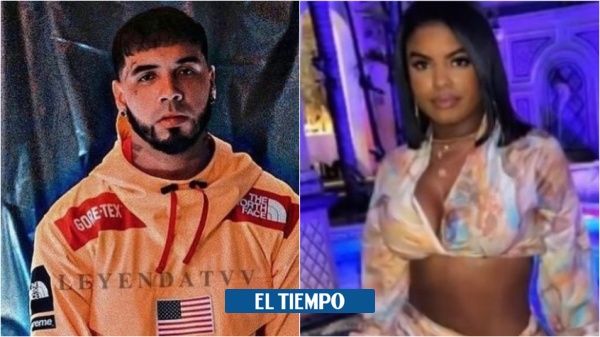 In the midst of the romance of the singers Anuel AA and Yailin a new controversy arose. The relationship has been marked by suspicions, the ghost of her ex, Karol G, and a hasty marriage proposal -for some Internet users-.

The couple is again the subject of criticism, as it was learned that a Colombian would be expecting a rapper’s baby. She would be six months pregnant, according to what was revealed by the American television program ‘El Gordo y la Flaca’.

What is known about the woman?

It would be Melissa Vallecilla, 28, who met the singer a couple of months ago at a private party in Houston, United States, in which an album by singer Drake was released.

As the aforementioned program reviews, the Colombian, resident in that country, would have attended the meeting and had the first approach with the Puerto Rican. Then new meetings would come in Miami and a long-distance relationship.

Vallecilla became pregnant and would have told the rapper the news. “According to a source, Anuel would have taken it in a good way”, specified the program of the ‘Univisión’ network.

To be sure that he was the father of the baby on the way, the couple underwent tests that, according to “El Gordo y la Flaca”, confirmed paternity.

“Anuel told him that he would recognize the baby and that he would have all his support, but everything changed when Anuel met Yailin,” the program revealed. From that moment on, the Colombian would have lost all kinds of communication with the 29-year-old artist.

(We recommend: Alberto Linero denies publication in which he allegedly attacks Petro).

The woman did not give statements in an interview with the American channel, so no further details of her accusations are known. Of course, as she would have said, she hopes that the interpreter of ‘Dictatorship’ or ‘Legend’ communicates with her and vouches for her alleged son.

For his part, Anuel has not spoken about it.

Accusation for not answering for his son

Despite the fact that you have failed her 1000 times, my sister has made sure that she does not lower you from the pedestal on which she has you

In the last hours, Reggaeton’s ex-in-laws attacked him for allegedly leaving his son Pablo and his ex-wife Astrid Cuevas homeless.

“Remember that everything that goes up also goes down (…). You took them out on the street. Do not worry that she is not alone, “wrote @ natsh.sp, who would be one of the artist’s ex-sisters-in-law, through her Instagram account.

(Don’t stop reading: Controversy over the video of La Liendra in which he opens the ‘deep web’ box).

Nicole Cuevas even stated that her nephew Pablo only receives one call a month from Anuel. “Despite the fact that you have failed her 1000 times, my sister has made sure that she does not lower you from the pedestal that she has you on. He is a child, he is not your fan, because that’s how you see it, ”she commented.

Astrid Cuevas He did not refer to what his sisters denounced, but he did leave a message on his social networks that several Internet users related to the situation: “Whoever acts wickedly must wish him luck, sooner or later he will need it.”

The Puerto Rican artist remains silent in the face of the controversy that surrounds social networks and is already on American television programs. Several of his followers are aware of the wedding with Yailin, 19, as the engagement was announced at the end of January, but has not materialized yet.

– Bad Bunny in ‘Safaera’ and the great plagiarism scandals in music.

– Controversy over the fence of the OnlyFans model in the student sector of Medellín.

– Hassam is honest about his divorce: ‘There was infidelity and I mistreated her’.

Colombian assures that she is pregnant, six months, with Anuel AA