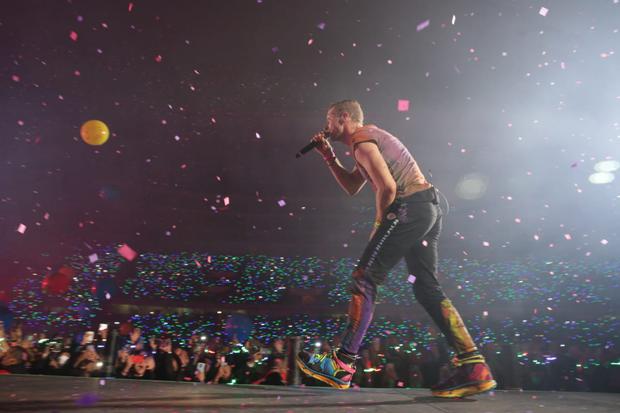 Who is the biggest fan of Coldplay? It could be the one who studied and analyzed the band’s setlist in each of their last shows, or maybe the one who uploaded 253 stories on Instagram during the concert of his favorite band. Perhaps those who climbed the gates of the National to sneak in and see Coldplay. Or it is the one who paid double or even triple to go see this group of Britons who played for the first time for two nights on Peruvian soil.

Coldplay was always my favorite band. Since the “Parachutes” full of melancholy appeared with songs like “Sparks”, “Yellow” or “Trouble” or when, still young, they released “A rush of blood to the head” (one of the best albums in history , in my humble opinion). That same band that today is capable of performing 10 dates in a row (and all sold-out) at the River Plate stadium, in Argentina, or that has the freshness to sing with the most popular youth group of the moment -BTS-, and release along with them the very catchy “My Universe”.

Six years after his last performance, in April 2016, always at the National Stadium, several things have changed. Here, we had several presidents, technology today allows us to have three, four or even five cameras on our cell phones. TikTok and Instagram emerged as the most popular social networks and so, indeed, many things changed.

Here, one thing that hasn’t changed is the popular (or unpopular) comment on social media. That how to behave in a concert, or how Chris Martin asks people not to use their cell phones for a song, that if we returned the bracelet delivered for the concert. Criticizing, some for good, and others not so much, of course. Everything, absolutely everything, is questionable, and even more so on social networks.

What is right and what is wrong? That’s where subjectivity comes in. Next, I will tell how the two shows were experienced (the first from the West grandstand and the second from Court 2) that sold out tickets well in advance.

On September 13 I arrived early at the stadium. Many of the people who were next to me had courtesy tickets (lucky them). “I came because an aunt works in…”, one of them tells me. Others have access to the cabin, but since it is already full, they occupy other spaces. At the end, all accommodated and ready to enjoy.

Truth be told, the attitude of recording the entire concert with the cell phone has always bothered me. The videos are very poorly recorded, things like framing, stability, optical zoom raised to the x power. And it makes sense, not all of us have the qualities to record with the quality or firmness that a professional can have. But, if our video is going to be so flawed, is it worth having a video like this (or several) of the show we came to see?

I have always believed that an average behavior should be something like this:

For everything else, we will always have YouTube. Try looking Coldplay in Lima 2022 and you will understand what I am talking about.

How beautiful it looks when most leave the cell phone and dedicate themselves to living the moment. “Viva la Vida” by Coldplay from Court 2. @Luces_ECpe pic.twitter.com/0UTmo4zhnh

The wristbands are a spectacle in themselves and give the attendee one more way to interact with the band. They do it from the kinetic dance floor or stationary bicycles to feed energy to the show in its entirety. Some (I would think the vast majority) return the bracelets and others do not. Although this time, unlike 2016, this bracelet had nothing allusive to Coldplay. Neither the name or any logo, nothing. It was simply a white bracelet, made with recyclable material, which emitted an infinity of lights. A thing of nothing and ready to be returned and continue to be used in the other concerts of the tour.

If you read the headline of the article, you will understand that from my point of view, Coldplay is the best band in the world. For now and in those figures that we like to know so much today: on Spotify, they are the most listened to band, with more than 57 million monthly reproductions. On their tours, they are the band that schedules the most dates and raises the most money as well. Due to its musical relevance, its validity is perceived in its most recent songs and singles. “Higher Power” and “My Universe” sound all over the world.

The first concert takes place between songs from almost all their albums, that is, from British pop, to the very melodic electronic and pop touches they have today. Now, when cell phone batteries seem to ask for a pause, songs like “Fix You” or “Biutyful” (closing) make people return to their devices to have that last long-awaited memory.

For the second show, and already with the media commotion of the “Chris Martin asked Peruvian fans to enjoy the song without their cell phones” (which he does in all the concerts on the tour, and specifically in “A Sky Full of Stars”), with the expert tweeters who stopped being specialists in pandemics, in armed conflicts (Ukrainian-Russian war) in couple commitments and infidelities (Shakira-Piqué or JLo-Ben Affleck) and more recently in British royalty (due to the death of Queen Elizabeth II), now our Twitter stars decided to be analysts of the Peruvian public in massive concerts. Some with a bachelor’s degree, others with a master’s degree and, the most experienced, with a doctorate in the field.

That, perhaps (I don’t think so), or a bit of luck, perhaps, made the energy felt at the band’s second performance in Lima different. A packed north grandstand and to applause, he directed almost everything wisely. The waves, the traditional cry of “Viva la Vida”, the “Olé Olé Olé, Coldplay”, everything came from there. Those who were further away, but felt stronger. And so the public as a whole, was infected much more.

Excuse the roosters and the emotion, but this, one of my favorite Coldplay songs, is “Sparks” and that’s how it sounded meters from my location. @Luces_ECpe pic.twitter.com/x3DG5Wxv0M

It was no longer Chris Martin asking to help him sing “The Scientist” or to help him close “Yellow” “Fix You”, perhaps the 3 most popular songs from last night. If not, it was the vocalist leaning on his audience and feeling the good vibes (which was sent with a particular hand movement) from the entire venue..

Before the show, I talked with a staff member from the concert organization, and we talked about what is good and bad about a concert. Not returning the bracelets, recording all the time with the cell phone and a bit of everything, this was recorded: “It is normal for people to want to record a lot with their cell phones. This is a band that comes every 5 or 6 years, they (the public) have paid their ticket to see them and if they want to see it from their cell phone, that’s fine. I am more in favor of enjoying music, but I understand them, I understand them perfectly”. And our fleeting friend continued to hand out the now traditional Love Button pins at every band concert.

Yesterday Viva la Vida was perhaps the most enjoyed song of the entire concert, along with “A Sky Full of Stars”. Sorry for paying attention to Chris Martin and not having it registered, I just did what the British asked: “Leave the cell phone for a moment and enjoy the music, with all our hearts”. There is no video, but surely some others did not pay attention. Fortunately, they were few.

The two Coldplay concerts were unforgettable. For those who attended, for those who unfortunately did business (yes, I am an enemy of resellers) and for those who did not. The final consolation is always to go to YouTube and search for what we could not see, but want to live.

Coldplay in Lima: the best band in the world vs. the sometimes tepid Peruvian public | CHRONICLE