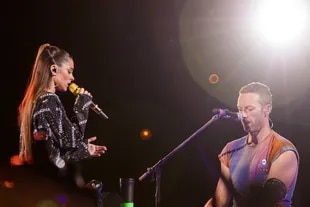 On the fifth night of Coldplay in River Platethe band led by the charismatic Chris Martin he pulled out the ace he had up his sleeve. If we intuited that the participation of Jin of bts It was not going to be the only surprise for the successful English group, who came to stay for a long time in Buenos Aires with their tour Music of the SpheresIt’s because we knew that ten concerts were enough for the British band to stick to the script of the show. And although it was first announced that there would be a surprise guest artist tomorrow, Wednesday, the event was brought forward and took place this Tuesday. Tiny She went on stage invited by Chris Martin and accompanied the singer on two songs, one by the British and one by her.

First they did “Let Somebody Go” together and then it was the turn of the most amazing, “Flesh and bone”, a song by Martina “Tini” Stoesselwhich was accompanied by the entire band.

Before, the show had started like each of Coldplay’s presentations at River, within the framework of this record series that unseated Roger Waters with The Wall. In this way, “Music of The Spheres”, “Higher Power” and “Aventure of a Lifetime”, with the smiling leader walking, jogging and closing the distance with the heart of the field, thanks to the catwalk that from the center of the stage connect with the most fervent public.

“Paradise” produced the first big explosion and “The Scientist” calmed it down, with Martin on piano, who later commented: “Thank you very much and welcome to the best Tuesday of my life. We are happy here in Buenos Aires, the house of our hearts. I am slowly learning Spanish… Thank you for these concerts, they are a gift from God… We are going to give you one hundred percent”.

Once again on the catwalk, at its end, all together to make “Viva la vida” from there, another unbeatable classic from the group that mobilizes all of River to dance, sing and raise their arms towards the moon. After “Hymn flor The Weekend”, finally came the moment that some suspected and most ignored: Tini’s participation.

The piano melody of the classic “Olé olé olé, Diego Diego…” chanted throughout the stadium. It is Chris Martin who sits back at the piano, alone at the end of the catwalk. And that’s the moment when Tini comes up to do a duet in English and Spanish “Let Somebody Go”. “Thank you very much Tiny. Perfect”, exclaims Martin at the end and she takes over.

“Good evening Argentina. Beautiful to be here, thank you very much for this opportunity, it is the most beautiful thing that happened to me in life. Let’s see if you guys know this song,” she said before lashing out with her ballad “Flesh and Bone,” alongside a monumental chorus. After an impeccable interpretation, the heartfelt embrace of the former Violetta with Martin, it put an end to the passage that will remain in the memory, just like the first time that Coldplay did “Of light music”.

We had already become accustomed to Coldplay’s version of “De musica light”, which the band surprisingly premiered in 2017 on its previous visit, at the Estadio Único de La Plata. After that, Chris Martin recorded it for the multimedia show Total Thanks-Soda Stereowho captained Charlie Alberti Y Zeta Bosioand in which the British interpreter could be seen from the screens singing the classic of the trio that he led Gustavo Cerati.

On the night of this Tuesday, now his new best Tuesday of his entire life (remember that the phrase had already been pronounced on the 25th, during the first show in River, which was seven days ago), “Of light music” sounded again as the penultimate item on the list. “Our best song”, introduced Chris Martin and the band immediately launched into the classic Soda: a correct interpretation with a Martin who sings it better and better and with a stadium that leaves everything, like at the end of the century when Cerati , Alberti and Bosio said goodbye or like when in 2007 they returned as “a bubble in time”.

On this fifth night of recital, Chris Martin already moves like another porteño, or like a River fan who is well accustomed to walking through the Monumental, only on an imposing stage that he handles at will, with elegance and solvency. He says that his Spanish improves and smiles, he cuts the band short to ask the entire audience to put away his cell phones, to free his hands from technological devices for a song and use his sight to look without intervening objects. He asks us to move our fingers to send peace to the world, to Ukraine, to Korea (for Seoul, he says, alluding to the tragic Halloween celebration in which 150 people died) and continues moving down the catwalk as if the show still was in its initial phase. After just over two hours, the fireworks put the bow on Coldplay’s fifth night at the Monumental. We are in the middle of the task and there is still a lot of history to write.

Jesús Hernández Alcocer, alleged murderer of singer Yrma Lydya, dies
From Queen to Led Zeppelin: Seven Live Aid concerts that were burned into rock history - MariskalRoc...
"I have not seen such a cute dead": Arcángel says when he sees his younger brother in the coffin