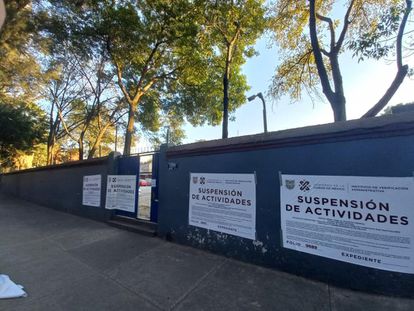 The Pentathlon Hall, where a clandestine concert of neo-Nazis and shaven-headed men was held a few days ago, was closed this Thursday by authorities of the Administrative Verification Institute (Invea) of Mexico City. The capital government authorities They announced that an administrative verification visit was made, and those in charge of the room did not present the documents required for the use of land to hold parties.

“As a result of that visit, precautionary measures were implemented consisting of the suspension of activities, since it does not have the Land Use Certificate as a party room,” the agency mentions. In a consultation carried out by EL PAÍS, Invea specified that the review visit derived from a citizen complaint, although it is an independent administrative process.

EL PAÍS documented a clandestine party with neo-fascist ideology held in this room on October 29, where around 300 people, mostly men tattooed with swastikas and other graphic elements related to far-right ideology, gathered for a concert. According to their page In social networks, this space was dedicated mainly to traditional parties, such as weddings, XV years and birthdays.

The neo-fascists who meet in Mexico don’t just do it in this room. For the celebration of the concert The Empire Strikes Back, the most recent party, the location was kept secret until a day before the event. All attendees had to go through a rigorous security filter to enter the venue; their identity was verified with a QR code, an official identification and a long list of confirmed, so a new congregation is not ruled out.

Yuri and the embarrassment of the cockroach: even Thalía called her to find out what happened
This is Vicente Fernández's favorite American artist
Concerts Anuel AA 2022 彡 Tickets, Dates, Cities