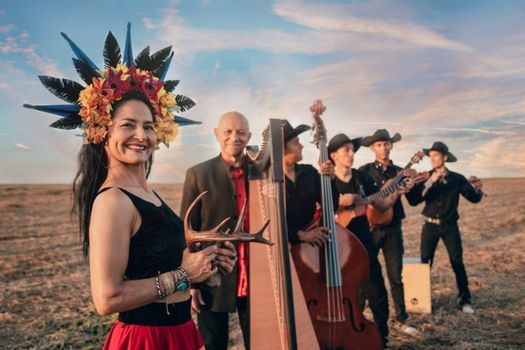 “Velorio” represents the new commitment of the band to explore the diversity of the sounds of the Orinoquía beyond the joropo.

Although Cimarron has spent 22 years touring the five continents as musical ambassadors of Colombia, the band demonstrates with this single that it stays closer than ever to the roots of its land. The video clip of “Wake” follows the life in resistance of the Sáliba ethnic group in the depths of Orocue, Casanare, a remote plains town that is accessed by crossing the mighty Meta and Manacacías rivers.

For the singer and director of Cimarrón, Ana Veydo, filming in Orocué has been the most important journey for the band on a creative level. “Velorio is a song left by the colonial evangelizing missions in the Llano. We went to Orocué in search of a new spiritual discourse for this legacy. In addition, Orocué was where José Eustasio Rivera wrote his universal work La Vorágine. The town filled us with inspiration for this new album,” said the joropo singer.

“Velorio” represents the new commitment of the band to explore the diversity of sounds of the Orinoquía beyond the joropo, this time with the novel inclusion of the Manguaré, a powerful Amazonian percussion instrument that had never before been recorded on a musical recording. With the Manguaré, Cimarrón creates a contemporary beat that puts this traditional song from the Llanos at the level of the songs that currently lead the commercial music charts.

This is the first single from Cimarrón’s new album, which will be available on May 24 on all digital platforms. It will be the band’s fourth studio album, after the success of Orinoco (2019), a production nominated for the Latin Grammy for Best Folk Album and acclaimed by international critics in media such as the magazine Forbes, Billboard, Newsweek, BBC London, CNN.

Prior to the release of the album, Cimarrón will star in the cover of the prestigious London Songlines magazine in May with a photograph of world icon Ruven Afanador, who has portrayed great universal characters, from the Dalai Lama and Oprah Winfrey, to Rosalía and Kim Kardashian. .

Cimarrón has taken the joropo to 38 countries and is so far the only Colombian group that has reached the Anglo Grammys with a nomination in the category Best Traditional Music Album in the World. In 2020, they won Best Band of the Year at the UK Songlines Music Awards. They have made history on stages such as Newport Folk Festival, Mawazine Festival in Morocco, Rainforest World Music Festival in Malaysia, Paléo Festival in Switzerland, Rajasthan International Folk Music Festival, Abu Dhabi Culture & Heritage Festival, Førde International Folk Music Festival, Musashino Concert Hall in Japan and the National Grand Theater in Beijing, China.