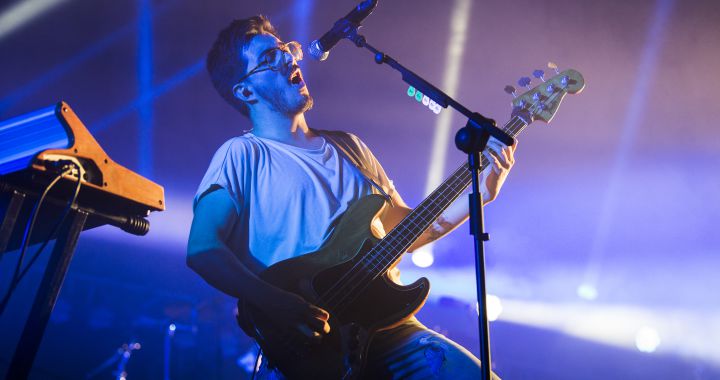 They are four friends who have known each other since they were five years old. Over the years, they fought to achieve the dream of any artist: to live on music and, above all, that others like it. They achieved this aspiration between Bogotá and Madrid, the two cities that saw them grow. Now, in the second of them, They have to have been consolidated on September 11, 2021 in the venue of the big events: the Wizink Center.

With a full to the brim (under what the pandemic allows), Susana Cala she was in charge of warming up engines for what would come later. With a style really similar to the headliner, he received the unanimous affection of the spectators. He left minutes before 9:00 p.m., but I would come back later for one of the surprises of the night.

Several themes of The Lumineers served so that the public did not get impatient. The volume rose progressively until, finally, the four protagonists appeared with the theme that we all expected: Where we go, which gives name to the last album and tour of Morat. Highly catchy pop song that elicited the first of countless screams from the stands. And it is that, in addition, it contains a phrase that makes Madrid’s people melt: “There is no drink that tastes so good, like your lips in Madrid”.

The party had only just begun and Love with ice, one of their classics from their debut album, was the perfect choice for the collective euphoria to follow. On Air and There’s No More to Talk About were the following from his new album: there was no voice that did not sing them.

Surprises and games with the public

The halfway point of the concert was plagued with surprises and games with the public. To get started, Susana Cala picked up the microphone again to sing with Morat Presiento, the song they released two years ago with Aitana. Later, First times filled with stars that moved to the beat of the song thanks to mobile flashlights. Creeps!

After the ballad De Cero, Martín became the absolute protagonist of the show. The man with the drumsticks was the main voice of My luck and later he played a game with the audience, dividing it into three parts and forming a “human battery”. It was one of the best and funniest moments! In addition, he also used an instrument called spacedrum with a spectacular sound.

But for surprises, the one that took a single lucky one of the first rows of the Wizink. She was the one in charge of leaving her signature on Morat’s piano, following the beautiful tradition that Colombians are carrying out on their tour.

Obviously, he could not miss Please Don’t Vayas (the hit with Beret), Remember me or a theme with Simon being the lead voice. We are well aware of the energy of the Morat bassist, but he never ceases to amaze us. With him, we all shout … “When love spreads it never says goodbye!”

Amazing ending: How dare you go back!

For the end there were some of the most beloved songs of the present. Juan Pablo and Villa were the protagonists of Aprender a Quererte, the reggaeton When Nobody Sees and Kisses in War. All three sounded like no other, in a mixture of love, nostalgia and passion in which everyone was a participant.

They said goodbye to return with the final apotheosis that Madrid deserved. It won’t go away It was the appetizer of theme that catapulted them to fame: How You Dare. The thousands of throats, bathed in confetti, left everything with this song that so many memories of the summer of 2016 will have flitted through the minds of the fans.

In this atypical moment that the planet crosses, Morat has known how to put an oasis of light brimming with love to a night that will remain intact in his memory and that of his followers: we already know “where they are going”, and we want to continue with them.