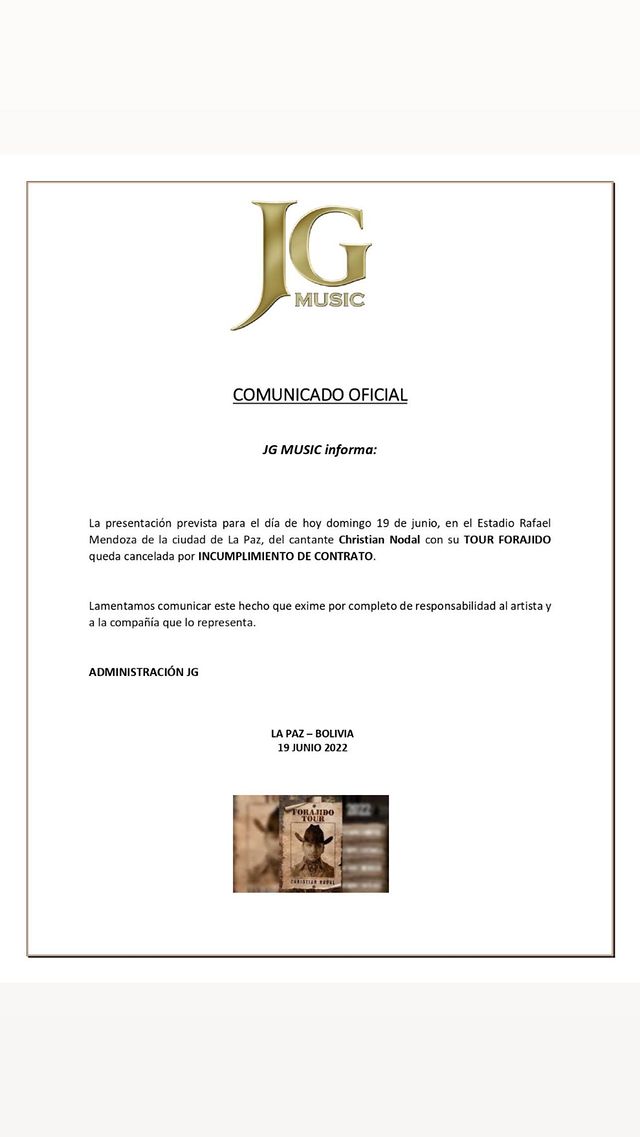 The JG Music company published a brief statement on its social networks indicating that Nodal’s presentation at the Rafael Mendoza stadium in La Paz was canceled due to “breach of contract”, without giving more details of the situation.

“We regret to communicate this fact that completely exempts the artist and the company that represents him from responsibility,” the statement said.

Meanwhile, hundreds of fans were already lining up at the concert venue to enter and have a good place to enjoy the show, which was part of their tour. Outlaw.

Several of the fans were confused by the announcement and began demanding their money back for their tickets.

Read more: Christian Nodal: the affectionate moment of the Mexican singer with Cazzu (and the video that could confirm their relationship)

The cancellation of Show It surprised the fans of La Paz, since their previous concerts in the Bolivian cities of Santa Cruz, in the east of the country, and the central Cochabamba were carried out with total normality.

The concert in Santa Cruz was held on Friday, June 17 at the Real Santa Cruz stadium, where the artist shared with his followers, who threw roses at him on stage. Also ice, for which he asked for respect from the public.

On Saturday 18, Nodal appeared at the Cochabamba plant in the Fabril complex.

Also read: The inspiration behind the new tattoo that Christian Nodal got in the middle of his face

The Mexican had planned to appear in three Bolivian cities on his first visit to the country.

The following presentations of Nodal, as part of his tour Outlawwill be next July 1 in Santiago de Chile at the Movistar Arena, and next July 2 in Melgar, Colombia, at the Las Vegas stadium.

Christian Nodal: This is what is known about the cancellation of a concert in Bolivia