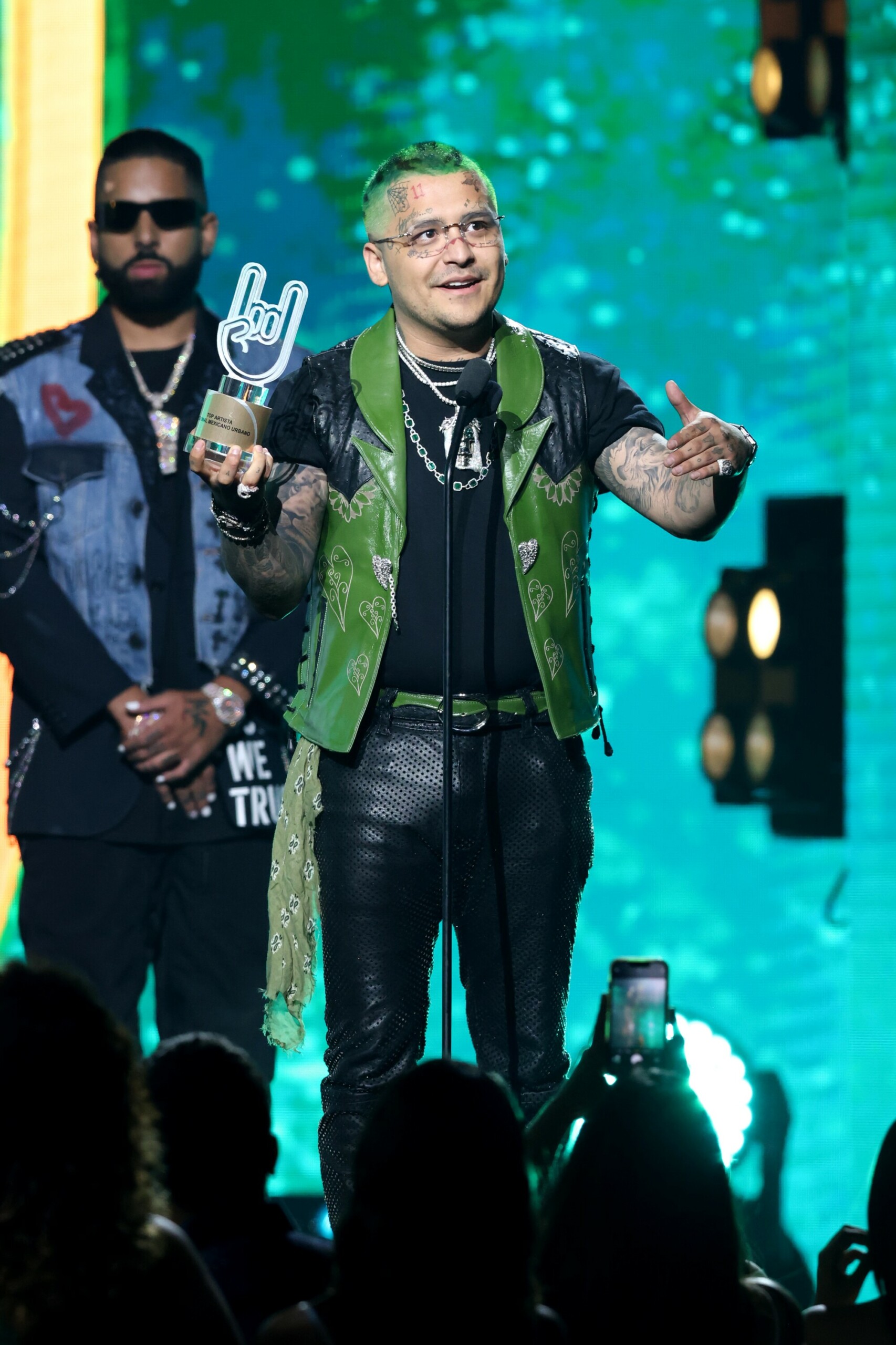 Once again Karol G is positioned as the top winner of an award ceremony. The last one was in April of this year. during the Latin AMAs, where despite not attending the ceremony held in Las Vegas, the singer won six awards for which everything indicated that her “Makinon” was still very hot among the beloved and faithful followers of the artist born on February 14 in Medellín , Colombia.

And it is that after sweeping that seventh edition of the Latin American Music Awards and presenting himself in style with his colleague Becky at the Coachella Festival, the awards do not stop falling into his hands, because now he has just become the top winner of the Tu Música Urbano Awards that were held tonight on Isla del Encanto, Puerto Rico, where artists of the urban genre gathered who popularized it in an “underground” way and the new exponents who, with their proposal, also today make it vibrate to the world.

Under the leadership of the Colombian Carmen Villalobos, the Puerto Rican Zuleyka Rivera and the Mexican Omar Chaparro, who made his debut on the Telemundo screen as a guest host at an award ceremony for that network, the three-hour ceremony saw the parade of many new exponents who They are making their mark, but also legends of the genre such as Zion and Lennox and Farruko, except for Karol G and Bad Bunny, who apparently no longer care about attending this type of awards.

However, Zion and Lennox showed their humility without poses or grandeur by going through the greatest hits of their career such as “Yo voy”, “Otra vez” and “Losing my head”, with which they made the youngsters sing and dance. present at the José Miguel Agrelot Coliseum in Puerto Rico.

Karol who a few weeks ago was news to the share the stage with the Mexican Anahí in Mexican lands and having performed in Lima, Peru during two totally sold out dates as part of her “Bichota Tour” through Latin America, now she is once again the top winner in an awards ceremony that was broadcast live on Telemundo to which she did not He attended, although he could have since his last tour performance was two days ago in Mexico City and his next concert is next Saturday, June 25 at the Chochi Sosa Stadium in Tegucigalpa, Honduras. She could have attended if she wanted.

And it is that after her successful tour “Bichota Tour” that even led her to appear at the Atanasio Girardot stadium in Medellín with a full house, Karol G is now preparing to undertake his show “$trip Love Tour”which is scheduled to visit 30 cities in the North American continent starting on September 6 from the city of Chicago and continuing through Toronto (Canada), New York, Miami, Las Vegas, Tampa, San Francisco, Austin, Houston, Dallas, Denver , San Diego, Washington DC, Charlotte, Philadelphia, Newark, Los Angeles and Miami.

Other winners of the night

Meanwhile, the other G, the one from Inglewood, California, won three awards in the categories Top Female Artist, Collaboration of the Year for “Mamiii” and Top Urban Tropical Song for “Fulanito”, while Argentine star María Becerra also won three awards in the sections of Female Top Rising Star, Song of the Year for “What else then? and Video of the New Year Artist for “Between us remix”.

Among the men, Bab Bunny appeared as the most nominated of the contest, but this time he had to settle for just two Top Urban Pop Song awards for “X last time” (shared with Daddy Yankee) and the award for “Composer of the Year”. He likewise did not attend to receive them.

The one who did win, also in absentia, three statuettes was Daddy Yankee in the categories of Top Male Artist, Top Urban Pop Song with “X last time” (shared with Bad Bunny) and the Male Artist Album of the Year for Legendaddy, the album with which El Boss retires from the stage, but not before making his followers dance with the last tour, which by the way, has five dates at the Kia Forum in Los Angeles (July 27, 28 and 29, 13 and August 15).

The boyband CNCO, Puerto Ricans Farruko and Feid, in addition to Lit Killah, Christian Nodal and Colombian J Balvin also won two awards each in the contest. CNCO won the awards for Top Artist Duo or Group and Song of the Year Duo or Group for the single “Toa la noche”. “We have been giving fire as a group for about six years and the truth is that the support has always been super faithful and if these six years we continue together giving fire it is because of you,” said the Puerto Rican from the Zabdiel de Jesús group.

Christian Nodal, who has just announced his new tour “Forajido” from September 15 in San José CA and arriving in Los Angeles on October 7, took one of the awards in one of the categories invented for this installment as it was Top Regional Mexican Urban Artist and that is because he shared one of his collaborations with the urban artist Gera Mx in the song “Botella after Bottle”, a song that also won the award for Top Regional Mexican Urban Song.

With a rather racy look on the lemon-lime side, Nodal thanked “México” from the stage and sent “congratulations to all the genre colleagues who dared to see beyond what this music had in store for us. Congratulations to everyone, they took it further there. Congratulations also to all the artists who gave in to make this fusion with this music as beautiful as regional Mexican music with everything you are doing,” said Nodal with his acrylic trophy in hand.

What caught my attention the most was his physical appearance, with his hair color and the black scorpion painted on his head in a lemon-lime tone that lit up the stage where he sang the solo hit “Botella after bottle” without the accompaniment of Gera Mx. , something that subtracted too much from his interpretation that looked very forced. Then, with a very marked pause, the singer VF7 appeared, with whom Nodal made his debut in the corrido genre lying down with the interpretation of “Pensar en ti”, this being the television debut of both singing this song. Later, Nodal sat down at the bar on stage to share drinks and microphones with the Colombians from Piso 21 and interpret the hit “Pa’ Olvidarme de Ella” with a lot of feeling.

Meanwhile, Farruko who was crowned with the award Top Christian/Spiritual Song for “Gracias Remix” with Pedro Capó and the special award “Premio Dedicatoria”, he knelt on stage to thank and then offer a speech of conscience while thanking God for what his present is today after having traveled the world with his music. “And it was easy for me to reach so many places with a song that showed my days of joy and made all of you dance and enjoy, but perhaps I did not have the best message and today I can get up when all the fingers pointed that I went crazy when I reconciled with the Lord and gave everything for rubbish to follow Him. I received a lot of criticism, I thought the world was going to fall on me, but I carried my cross with joy and I continue to carry it. I also want to dedicate this award to Christian music singers because today I understand the struggle they make,” said Farruko to applause. “Keep praying, hearts are very cold, there is a lot of evil, a lot of envy, a lot of selfishness, we have to change that my people. May God bless you and have mercy on all of us,” added the Puerto Rican with his award in hand.

Farruko also had the opportunity to sing his song “Nazareno” with DJ Adoni, and then shared with Akim to give voice to his single “Luz” at the beginning of the ceremony.

Victor Manuelle, who received the Contribution Award, also had his musical participation on stage singing his new hit “Vamo’ a ver si el gas pela”, a tribute song to the late “Sonero del Pueblo” Marvin Santiago and which he shares alongside the urban singer Miky Woodz.

Other musical presentations were those of revelation María Becerra with the television debut of her most recent hit “Ojalá”, the Puerto Rican Feid singing his hits “Porfa” and “Punishment”. The Argentine also shared the scene with the Mexican Sofía Reyes to sing the urban theme “Mars”.

Puerto Rican Chesca, sporting a new pastel-colored hair look, and Nio Garcia shared the stage with their song “Tu2ru.” Sech, the Panamanian, brought the dembow rhythm to the stage of Premios Tu Música Urbano with his song “Borracho”.

The pretty Mexican Kim Loaiza He gave voice to “Ya no somos” and then shared the microphones with the Venezuelan influencer Lele Pons to sing “Piketona” together. Loiza took the Top New Female Artist award and dedicated it to her husband and her children “who have changed my life,” she said.

Angeleno Natanael Cano also had his moment on stage singing “NataAoki”, which the singer includes on his new album NataKong. It is a danceable rhythm, very different from what he initially offered in his guitar rhythm proposal. He now looks like a reggaeton player.

Artist of the Year
Carol G

Song of the Year
What else then? – J Balvin and Maria Becerra

Song of the Year or Group
All Night – CNCO

Album of the year
Inter Shibuya – The Mafia – Feid

Composer of the Year
bad bunny

Christian Nodal illuminated the Tu Música Urbano Awards with ‘lemon lime’, while Karol G swept it away without attending