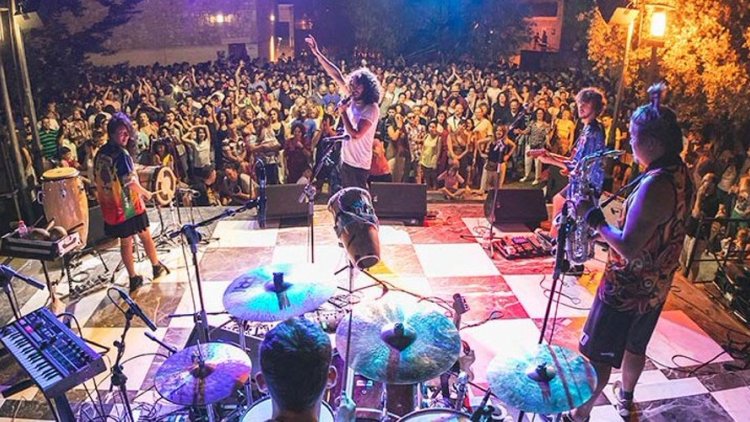 It has been more than ten years since La Chiva Gantiva He burst onto the stage to start an unexpected and frantic journey that has made everyone who has been fortunate enough to see his act jump jump. Even so, the history of this group comes from before, from when Rafael Espinel, Natalia Gantiva and Felipe Deckers They were students in Brussels, Belgium, and they took advantage of their free time to play drums at parties they organized at home, then in bars and later on platforms.

There are several nationalities that come together in this vibrant sound miscegenation, which has been seen as a rhythm that functions as a link with the last conclusion of music, dance. There are also many reasons to join in their anniversary celebration.

Recently, La Chiva Gantiva released her single “Modern Condemnation”, that was born in the middle of the situation that the world had to assume in these couple of years and which is part of his EP Ask the People. It is a journey through the dark side of our present, through the polarization of peoples, the climate crisis and the indifference of so many to what is a reality before our eyes. And it is at the same time a hymn to freedom and the need to transform the bars that we have put into our existence.

“‘Modern Condemnation ‘ It is also a catharsis to forgiveness, this whole situation of the pandemic made me want more to want to hug my father, my friends … and since I couldn’t do it, then the things I complained about before were no longer relevant. Now the important thing has become more evident to me, and it is that we have each other. Love is the basis of everything”, Natalia Gantiva explains in a statement.

In addition, the group also launched a video in virtual reality in which the viewer can enjoy the unique experience of being on stage with the musicians. The session includes two pieces, “Ask the people” and “Modern Condemnation”, which were recorded in Ancient Belgium (www.abconcerts.be) in Brussels, where the band planned to celebrate its 10th anniversary before the pandemic hit.

Join in the joy below: