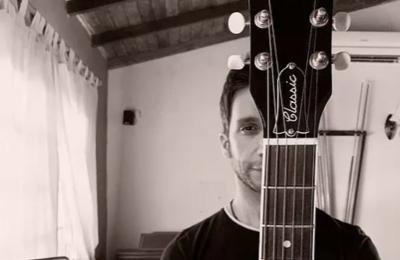 Rock, nobody doubts it at this point, is a way of life. Beyond the inherent iconography of this musical genre, for Chevy Verona, guitarist and voice of the band Verona, founded in Punto Fijo, Falcón state, it is the perfect framework of the values ​​that sustain its existence, from the perception of a humanity in decline to the good and bad experiences that love brings.

Possessing the right, precise, concise word, as if it were a musical emulator of Raymond Carver, an American author who bared the soul of his time with stories as sharp as minimalist, Chevy Verona knows that the countercultural character of rock’n ‘ roll that moves him and the other three members of Verona -Ray Díaz (bassist), Atari (guitarist) and Eduardo Goitía (also drummer) – is not reflected in songs of political and social denunciation, but in themes that, as if they were films, they make visible, even if they are not autobiographical, the experiences of each of these rockers.

“The original source of inspiration, most of the time, is love and lack of love in all its aspects, with suspense included,” says the guitarist, who already at age ten was playing drums in a Punto Fijo band, made up of by friends from school, called Synthesis, which years later changed its name to LSD Acme. (Laments of Banished Saints). The university commitments of its members forced the group to disband, so Chevy Verona tried his luck as a soloist with Chevy and I, from which a self-titled album was born, recorded live, without edition, which had an important resonance in the public and local radio stations.

Raw and rock
Although born in Caracas, Verona, the musician has lived most of his life in the Judibana oil field, very close to the Amuay refinery, which in the 1960s and 1970s was also the temporary home to US oil technicians and experts. .

The youngest of a family of three brothers says: “That marked everything, lifestyle, architecture, musical culture… My mother listens to rock from the sixties and seventies since that time and I grew up with that influence. My brother Carlos had a band called Amper, and its members rehearsed in a room of the house with the walls covered with posters and acetate records. They rocked a lot there and I saw all of that. That whole world began to attract me until I asked my brother to teach me how to play drums. He taught me very patiently, and I learned. He was pretty good at it, he had (I have!) A good ear for music ”.

From there to the band Síntesis there was only a small step. “We went from less to more, we played on birthdays until we started doing it at festivals here, in big touches. We were like the Hansons of the time; some little children who attracted a lot of attention because we played well. We were also surrounded by people with more successful bands. We were the darlings of the move, “adds Chevy Verona.

Good chemistry
Between 2000, 2001, together with his cousin Emiro Aguilar, better known as Atari, Chevy Verona founded the band that bears his surname. “We are brothers. We have literally known each other our whole lives, and we have always had the same musical tastes, “says the musician, who, although he took piano lessons, did not have a formal musical education.

-Eduardo (Goitía) and Ray (Díaz, also bassist of Candy66) are somewhat younger than us, but we are all from the same urbanization, where everyone knows each other. At some point, we played in friendly bands, of similar styles and with several friends in common. Atari and I started the project and included Eduardo, later Ray came in, recommended by Eduardo, but it was as if we had known each other forever, there has been very good chemistry between the four from the beginning, he adds. 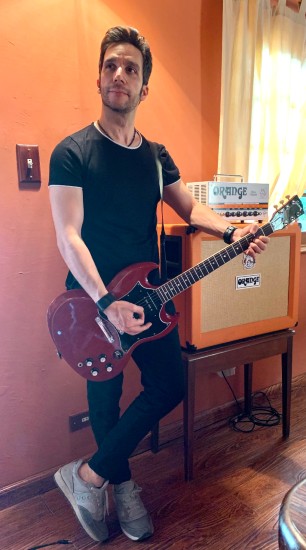 “Like any good book, our history has had its ups and downs,” says Chevy Verona (COURTESY)

-With what philosophy was Verona born?
-Verona has been the channel, the route through which four friends have been traveling to materialize all our creativity and live the typical experiences of a rock band.

-What influences do you recognize in your work?
-Casually, the four of us share many musical tastes, we follow several bands in common. We are not very open when it comes to getting out of the rock genre. Among our main influences I can name Radiohead, Placebo, Nirvana, Our Lady Peace, Stone Temple Pilots, The Get Up Kids and Kent, among others.

-In 20 years of history, how has the band evolved? How far do you want to go?
-As in any good book, our history has had its ups and downs. The first years were quite active, records, videos, tours, festivals abroad, awards, etc. Something much bigger was brewing, we were focused and determined to follow that path, but due to life issues we had to distance ourselves, we have never stopped being in contact as a good family that we are, and in recent times we have been again retaking and taking advantage of technological resources to recreate music and release new material. Where do we want to go? Better not put limits on things and enjoy the road.

In two decades, Verona, the group, adds to their life book the one that their debut album Summer Consequence has been cataloged by the magazine Rolling stone as one of the best 50 albums of 2004 (in 2014 it was remastered); the Urbe Award for Best Band of 2007; that three singles of Anywhere (2008) will be located in the “top chart” of rock in the contemporary adult stations in Venezuela, and a participation in the Festival South by Southwest (SXSW) of 2010, in Austin, Texas, along with bands such as Stone Temple Pilots and Hole .

-Was the fact that they considered singing in English from the beginning a strategy designed for internationalization?
-No, it was not a strategy. We just liked the dynamics and loudness of the English songs better. I remember that this language issue was very controversial at the time, and afterwards many bands followed that path.

On Gravity, the Verona EP published in 2019 and produced by the Latin Grammy winner, Enrique González Müller, its composer and lyricist has said: “This material is more direct than our previous works, it is a more rocky Verona, without neglecting the aesthetics of the melodies that, in my opinion, is one of our main characteristics. (…) It speaks of an internal war, of lessons learned very late, of the masochism of the human being and of how distressing a situation can become after the damage has already been done ”. (The universal, 2-7-2019).

This month the band released the single Delirium, with a video-lyric, and in June it will do the same with the theme Proud of You, also with video. They work to present before the end of the year, a new full-length album.

-We are currently separated in distance, but active in music, taking up what we like the most and about to release a home recording album entitled Acoustic Sessions consisting of 10 songs from our old repertoire but in acoustic format. From this album we have already released 2 singles, Chasing after you Y Trouble times, which has a video on YouTube (vrnmusic), says Chevy Verona.

-What positive aspects has having to create from a distance given you?
-Eduardo is in Argentina, Atari and Ray in the United States and I, for the moment, am in Venezuela. The only positive thing I see is that we had to learn a lot of things, like recording from home, which has been a challenge. More than the distance, I would say that the trap of the pandemic is what has allowed us to have free time that perhaps in normal times we would not have had. It has helped us to focus, create, compose and record. Otherwise, being apart is not the ideal setting for a band.
@ juanchi62