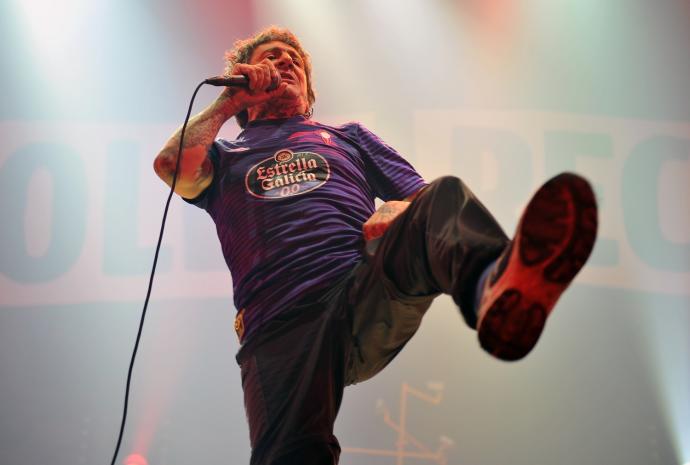 It is not possible to postpone the Polla Rcords concert because they are retiring from the stage this year.

The explosion of infections caused by omicron has brought with it new restrictions to stop the spread of the virus. Since the measures that came into force yesterday were known, with which the Basque Government intends to turn the current situation of the pandemic around, there has been a cascade of cancellations and suspensions of concerts and shows.

From different sectors it was explained yesterday to this newspaper that “It is becoming more complicated scenarios; for everyone it is almost like starting over, to go back to the situation of a year and a half, but we hope this is just a bump. “

During yesterday Wednesday, the announcements and meetings to try to reschedule shows or relocate seats of those that were kept on the billboard. According to the capacity limitations imposed until January 28, in venues with a capacity between 1,600 and 5,000 people, the maximum capacity indoors is 800 people. And as regards venues with a capacity of more than 5,000 people, the maximum capacity is restricted to 50%.

One of the first cancellations to arrive in Bizkaia was the José Luis Perales concert that was going to be offered yesterday Wednesday at the Euskalduna Palace.. The singer was going to perform as part of his tour Ballads for a Farewell, within which he already offered a performance last Monday in Bilbao. From the Get In promoter it was explained that he had done everything possible “to carry out this long-awaited date by the public since it was the singer’s last performance before permanently retiring from the stage”, but capacity limitations prevented it. According to the decree, the concert could only have been held with a capacity of 800 people, 37% of the usual in Euskalduna. A number that was not profitable and that would have been difficult to carry out since the tickets were completely sold out. “Who to let in and who to leave out? That is impossible, we have not wanted to be discriminatory “, assured from the organization. According to reports from the producer, the amount of the tickets will be returned in the same sales channel used for the purchase of the tickets.

The Los Secretos concert in Euskalduna is under study.

The production company also planned to offer these days other concerts at the Donostiarra Kursaal by Los Secretos and Mikel Erentxun, which have also been postponed to other dates. The group led by Álvaro Urquijo has scheduled a concert on January 6 in Bilbao and the organizers are managing it with those responsible for Euskalduna. Although its cancellation has not yet been confirmed, it is not ruled out that it can also be postponed to another date. “If there were changes, they would be updated on the web,” they explain from Euskalduna.

The situation caused by the pandemic also caused the suspension of the children’s musical Aladdin which, likewise, was programmed to yesterday Wednesday at the Euskalduna Palace in Bilbao. In this case, the show does have a postponement date and It will be staged on February 12.

These suspensions are in addition to the

, as announced by the promoter Last Tour due to the reduction of the capacity to 50 percent in closed venues with more than 5,000 people capacity, such as the Anoeta velodrome. On this occasion, a new postponement is not possible since the band will not act beyond the year 2021. “Therefore, and given the impossibility of activating a mechanism that allows the public to readjust to the new capacity, since it would be discriminatory in any case , the promoter is forced to cancel the concert, “said Last Tour.

Kake Antzokia has also canceled their concerts for the next three days. At the moment, the Akatz concert is held on January 5. According to its singer Unai Bite “Its celebration is in the hands of Kafe Antzokia.”

The changes have also reached the theater, so the Basauri Social Theater has postponed the show A moonless night by Juan Diego Botto, scheduled for Thursday, until September 27, 2022.

At the moment, no show has been canceled at the Arriaga programmed although they assure that it will be studied one by one and adapting to the new regulations.

As explained yesterday Thursday also from the Bilbao City Council, the events of Bilbao Arena will not be affected either, which has a capacity of 10,000 people. “But in the month of January there are no mass events,” they pointed out.

Right now, the programmers are analyzing one by one the possibility of carrying them out or suspending them in accordance with the new sanitary regulations. In the case of ABAO, its president, Juan Calos Matellanes, has called an extraordinary meeting to analyze the situation and decide what to do in the face of the new measures. Four of the five functions of a new title of his season are in jeopardy, Clemenza di Tito, by Mozart, which premieres in Euskalduna on January 22.

The machinery is already up and running, the singers are scheduled to arrive in the capital of Biscay in the next few days for rehearsals, everything is even ready for the assembly of the Opéra de Lausanne to move to the capital of Biscay. At the meeting, a decision will be made on the new situation, which will be communicated immediately to the partners.

Movie theaters have not seen a time with so many restrictions since they opened their doors on June 26or 2020 after confinement like the current one. Although for most of this time they have lived with capacity limitations, they have never before had a 40% reduction in viewers together with the prohibition of eating.

“And to this we must add the covid certificate, which is still a reduction because there are people who cannot come”, explained yesterday the secretary of Ezae (Association of cinemas of the Basque Country), Iñaki Elorza.

The secrets. Suspended in the Kursaal. The concert in Euskalduna is being studied.

Arriaga. At the moment, he maintains his shows.

The BOS. He maintains his concerts, adapting them to the new capacity.

ABAO. You will decide what to do at an Extraordinary Meeting.

Coffee Theater. At the moment, their concerts for the next three days are suspended.

Cascade of concert cancellations and rescheduling to face the covid