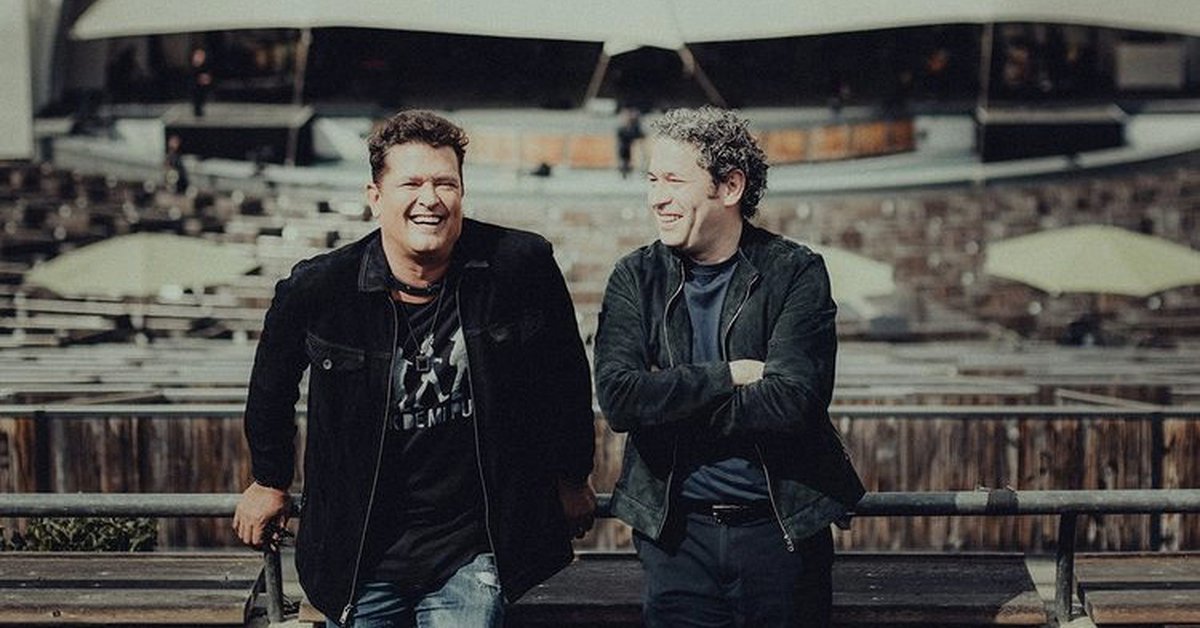 Tweet
Share
Share
Pin
Carlos Vives and Gustavo Dudamel in concert: for two nights, the Los Angeles Philharmonic Orchestra will play to the rhythm of the vallenato. Photo: LA Phil

Carlos Vives, a Vallenato singer born in Santa Marta, will celebrate 60 years of life with a resounding return to the stage in North America. His new ‘tour’, which goes by the name ‘After all you live’, will have dates between 2021 and early 2022 between the United States and Canada. However, the initial concerts have a special collaboration that would mark the history of two important Latin Americans: the vallenatero will be accompanied by Gustavo Dudamel and the Los Angeles Philharmonic Orchestra during the two dates scheduled in the Californian city.

The Venezuelan conductor, who will direct the Paris Opera from this year, and the Colombian had already joined forces for a virtual concert. However, due to accelerated immunity from vaccines, the entire orchestra will now be able to be witnessed at the Hollywood Bowl on August 27 and 28.

According to the description of the event, it was anticipated that they will be combined “Traditional sounds from his native country Colombia, with modern pop, rock and R&B, with the melody of 15 Latin Grammys, two Grammy awards and millions of albums sold around the world”, announced the stage, on the page to access tickets.

According to an interview with the local LA Times, the Colombian assured that the first concert fostered the relationship he now has with the conductor and the orchestra’s musicians. “It was still done with distance, I framed in two square meters, and it generated such a good atmosphere with the musicians, with Gustavo and with the directors of the Bowl, that this gave us the possibility to start our tour in the United States there. (…) This time we will have an audience and the full orchestra. It’s going to be a wonderful christening back ”, the singer commented to the Californian newspaper.

In addition, he assured that it is considered “quicko” by combining philharmonic language with popular music. “I don’t like these collaborations very much, perhaps because there is a lack of knowledge of the fundamental patterns of what we do to express them with a wind, string or percussion team of an orchestra”, revealed.

This time, with the help of a New York arranger, the vallenatero managed to insert his tropical musical sounds into the orchestra’s configuration. “I was interested in maintaining those elements that marked the style of Carlos Vives, and that implied bringing cumbieras, vallenatas or ‘porreras’ percussion patterns to the electric instruments that correspond to our rhythms such as chalupas and champetas”, added.

Vives will honor Shakira on her next album

They have been days of a lot of movement in the life of Carlos Vives. In addition to turning 60 on August 7, and celebrating it with his family and friends, the samario announced his new responsibilities at the Gaira restaurant, a company he ran with his brother Guillo; and he premiered ‘Kisses at any time’, a song that he interprets by the hand of his daughter Lucy and the brothers Mau and Ricky Montaner. However, these are not the only novelties for Vives, because, after achieving a resounding success with his most recent album ‘Cumbiana’, he announced that, on his next album, he will pay tribute to his colleague and friend, the Barranquilla , Shakira.

The information was exposed by the musical magazine Shock that, in one of its most recent notes, assured that Vives intends to make a special mention of the ‘barefoot’ interpreter. “On the album we will acknowledge her great career, because she has deserved it for a long time and it is something very beautiful for her”, he specifically told journalist Sebastián Peña at a press conference.

The new album, according to information taken from national media, will be called ‘Cumbiana 2’ where, in fact, the song that he premiered a few days ago with his daughter and the Montaner brothers will be recorded.

Alejandro Gaviria officially launched his campaign for the presidency: “My goal is to lead the construction of a fairer country”
Supreme Court orders the application of a gender approach in cases involving LGBTIQ couples to avoid discrimination