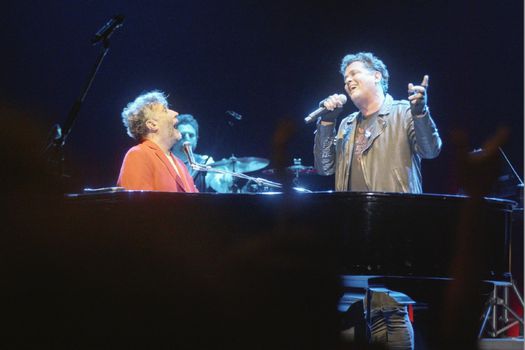 Carlos Vives pays homage to Argentine rock with “Babel”, a song composed by him together with Fito Páez.

Carlos Vives continues to heat up his engines to present his new musical journey with “Cumbiana II”. Today he premieres his new song and video “Babel” alongside legendary Argentine artist Fito Páez. In the song, Vives pays homage to Argentine rock that has always influenced him and talks about a social problem.

Under the Sony Music Latin label, “Babel” is now available on all digital platforms.

(We recommend: Julieta Venegas, the same love as always)

Composed by Carlos Vives and Fito Páez, and under the production of Carlos Vives, Fito Paez, Kogiman, formed by the duo Martín Velilla and Andrés Leal; with them Diego Olivero. “Babel” is a theme that talks about how difficult it is for human beings to understand each other, in these times everyone wants to be right and, in the end, the train leaves them because they go their different ways.

“When you make a song with this type of theme there is something of that Argentine Rock, from Charly García, Luis Alberto Spinetta and Paez himself, who allowed me to imagine that with tropical music I could invent my own rock. With “Babel” I not only pay homage to that rock, it is also an ode to the understanding between countries and culture, to a world that can be made possible thanks to music,” said Vives, who united cumbia with Argentine rock in this iconic collaboration.

The music video was directed by Sergio Rodríguez and Carlos Andrés Valencia of Mestiza Films, and filmed between Bogotá and Santa Marta (near Ciénaga). While the world is experiencing a relentless war, where people do not listen to each other, in the visuals you can see how a girl perceives everything that happens around her; confused, sad and taking action so that the future is different.

Following the line of the song, the protagonist inspires her parents and the public to get on the bandwagon together and be part of the real change in the world. Throughout the video you can see classic rock instruments such as the electric guitar, the bass, and also the typical bagpipe of Mayte Montero, the millo flute, among other sounds that Vives offers to enter the world of “Cumbiana II”.

Vives returned to Mexico and Central America with 4 impressive concerts in Aguascalientes (Mexico), Panama, El Salvador and Costa Rica, where more than 70,000 people sang along with Vives his greatest hits and experienced an unforgettable show in every way. The icon was surprised by the salsa legend Marc Anthony in Aguascalientes (Mexico) and, in addition, he had Mau y Ricky as guest artists at his concert in Costa Rica.

(You may be interested in: Kany García premieres his single “Muero” with Alejandro Sanz)

Prior to “Babel”, and as a prelude to the release of “Cumbiana II”, Vives released his song “Solo”, where he projects the diversity and contradiction of the human being: the song is sad because of the story it tells, but happy, at the same time, because of the rhythm and the sounds that it includes. “This song is a tusa, as spite is called in Colombia, but it was also an experiment with bagpipes and the typical sound of the Sierra Nevada. With this song, as what you can expect from the album, it is a journey through different genres in which our culture is connected”, said Carlos Vives.

Carlos Vives and Fito Páez come together in “Babel”, a tribute to Argentine rock