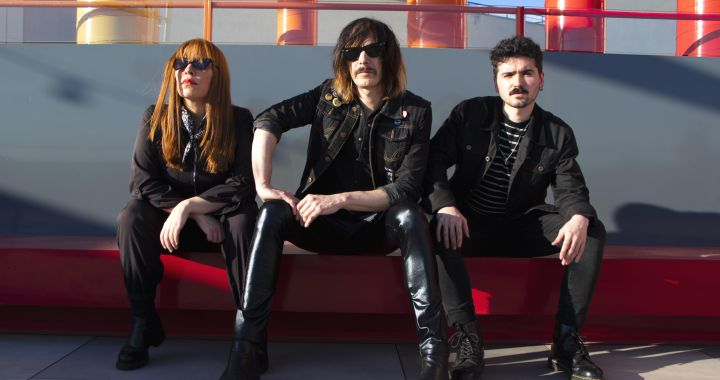 There are those who were born for music and art, people who feed their lives on live concerts and the pleasure of creating a new work. Capsula is one of those groups that live by and to enjoy with their audience. Martín Guevara, Coni Duchess and Álvaro OlaetxeaThey have brought rock and punk to the main stages of Europe and America and have managed to stand on the unstable peak of success.

The pandemic has failed to defeat the vitality of Capsule nor his desire to enjoy on stage. In 2021 they have returned with their latest album: ‘Phantasmaville’, eleven new songs that maintain and amplify his psycho-glam-rocker vocation. They tell us much more about their music, their passion for vinyl and the evolution of the industry in Face A in LOS40 Euskadi.

Face A: It seems that it was yesterday when you started and you are already on album number 13. If you could talk with your SELF from the past, what face would you have when you find out that you have reached this point? Would you be surprised?

Capsule: We did have that wish, but obviously you never know what is going to happen. We were building our future little brick by brick to be able to achieve the desire we had to be a band that was going around the world and expressing itself with the energy of rock and roll. If I had to say something to our past self, I would say “come on girls and boys!”

LISTEN HERE TO THE PROGRAM 👇🏼

Face A: Now you give your music and the new album to your listeners so that it also becomes part of them, right?

C: This is like childbirth. It has been said many times, but we are quite prose writers. We already have 13 children. It is working very well, especially since we listen to it again and it continues to fill us with energy. With previous albums it happened to us that we would listen to it again and we thought that there were things that could be retouched, but on this album every second of each song has captured everything we wanted to say. Each of the sounds expresses it.

Side A: Since you started, many years have passed and many things have changed, is there something that you miss from those beginnings or that you would have avoided to save yourself problems?

C: At first, groups always have to adapt, but this is a cycle and some things go back to how they were years ago. Sometimes I remember the oldest bands that lived how everything changed from vinyl to CDs and I think “why am I going to go crazy”. This we have experienced in recent years. The digital invasion made reality evolve to the point that many very good artists began to appear thanks to this change, but then there are others that were not real and were also there. It was a very confusing time for the entire industry and for festival programmers, because they did not know how to live with this new digital and physical world. I think it’s clearing up now. In our case, that we are a live group, our education and growth comes from living, from going to each room and each city to live from the concert. That is what is forming us and is giving us experience. On the other hand, we try to live with this new digital world so that it is also something wonderful.

Side A: The presale has made it possible for many lucky people to have all these songs on vinyl. Also, signed, right?

C: If the truth. From the first album in 98 we had the desire that the fan or listener could have our music in a tangible way. There is nothing more tangible than a vinyl record. Luckily, we have our entire discography in this format. That is why we take great care of the cover, the photos that it brings inside and the music. We want it to be a beautiful object to hold in your hand while listening to the songs, that ritual that all vinyl collectors like.

Capsule, much more than rock & roll