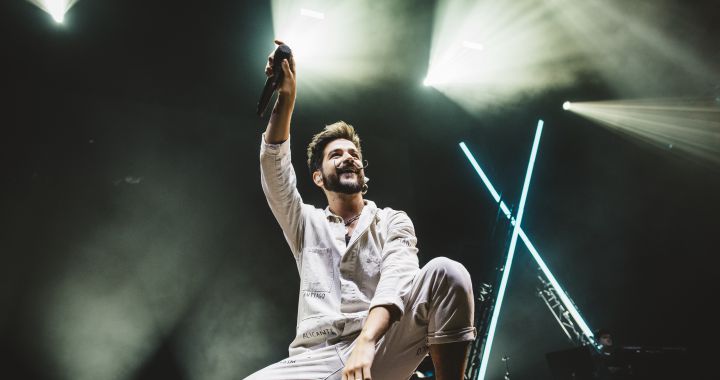 He gets out of jail, listening to music from Camilo looping no. The Colombian artist has become one of the biggest musical stars of the moment. There is no singer who does not want to release a song with him. Shakira, Pablo Alboran, Karol G, Shawn Mendes O Selena Gomez are just some of the names that appear in their contributions. And they all want to join the Camilo rocket. Theme that launches, theme that becomes a hit.

In times where sexuality, partying, and spite fill the lyrics of Latin music, Camilo sings about true love. The same one that we thought only existed in Disney movies and that ends with the two protagonists at the altar. Because yes, in times of perreo there is also room for romantics. And this Sunday September 5, the WiZink Center in Madrid has become the proof of this.

Camilo landed in Madrid in front of thousands of people this Sunday with his Mis manos Tour, the first tour of the Colombian. He did it excited, surrounded by his family and with various surprises prepared on stage.

But a Camilo concert is an almost religious experience. His tribe, the name given to his followers, is a community that has its own greeting and that supports the Colombian in everything he brings out. In this way, the concert could not begin in any other way than by singing what would be the Our Father of his followers: Favorite.

The artist came out in white, barefoot and eating the stage. Once he finished singing the first song, he greeted the entire audience. The tribe reacted with joy and gave their idol the gesture that defines them: raising their hands with intertwined fingers. A lovely way to welcome the artist.

The ceremony had only just begun and there was still more than an hour and a half of music ahead.

Pablo Alboran, the first surprise of the night

Taking advantage of the fact that he was in the Spanish capital, Camilo had some guests on stage. The first to leave was Pablo Alboran. The two artists have intoned the collaboration of The Same Air.

The turns of Alboran’s voice drive the audience crazy, taking it to a mystical level. That melody, that lyrics, those two stars singing about a heartbreak … The attendees were already totally within the experience. On fire with her, like the bonfire and the red lighting that enveloped the stage during the performance.

And the real protagonist of Camilo’s show arrived

“All my songs talk about my wife, Evaluna”, Camilo has said on more than one occasion. The love story between the singer-songwriter and the Montaner family’s youngest daughter is one of the internet’s favorites. They fell in love, shared their romance on Instagram and got married. We saw her wedding and her honeymoon in two video clips. Also, they talk about each other with passion. It looks like a couple out of a 21st century fairy tale, but no. It is real. And you just had to see them on stage to prove it.

Evaluna, who is accompanying her husband on his tour, appeared on stage. Like a musical where the two protagonists express their unconditional love while looking into each other’s eyes singing, Evaluna and Camilo did it through Machu Pichu and First time.

In addition, Evaluna sang live 999, the new theme of her husband with Selena Gomez. And it is that, although the Colombian’s concert had great stars, it seems that the American did not do well to perform that night in Madrid.

This we did not expect: Nicki Nicole

And it was time for the second surprise of the night. “I have to welcome to the stage an Argentine girl who is playing a lot,” says the Colombian before Nicki Nicole appeared.

The Argentine, who had acted as one of the headliners of the Coca-Cola Music Experience the day before, came out on stage stomping. Although the two artists still have no collaboration (who knows if they dare to work on a song after this meeting), they dared to sing the song The hard.

The most exciting moment of the night

But in every romantic movie there is a moment where the protagonist collapses and excites the audience. Camilo left the audience with a heavy heart when he told the origin of the theme Half Moon. With his parents in the front row, the young man began to narrate how bad his family had it two years ago. His father was torn between life and death. Through tears, Camilo has shared how important his wife was to not collapse at that time:

“I am enjoying this wonderful moment with my dad: healthy and perfect. I wrote this song while my dad was there and Evaluna was with me every moment. I wrote that song for her because she was like a little light that was always there ”.

Dani Martín: the last surprise of the night

In the final stretch of the concert, Camilo kept one of the great surprises of the night. Nothing more and nothing less than Dani Martin. Both artists have a beautiful friendship for years. In fact, the Madrilenian has been in charge of teaching Madrid to the Colombian.

“My first Spanish wine, my first Machego cheese and my first tomato bread was with Dani Martín. My soul brother. An artist that I love with all my heart, “said Camilo to introduce the singer.

Both friends melted into a hug on stage to the screams of thousands of people. And there is no doubt that Dani Martín continues to unleash passions. That’s when they sang their theme Scissor hand.

Finally, Camilo had two songs saved for his audience to give everything: Kesi and Vida de rico. Although attendees couldn’t move from their seats due to restrictions, hundreds of hands danced skyward to the beat of the song.

A story with a happy ending and that left the audience with a sweet taste in their mouths. And the thing is that one leaves Camilo’s concert with the feeling that love can do everything and that dreams come true. Then Monday comes and passes.