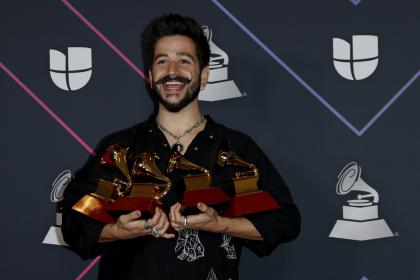 Camilo, which won four Latin Grammys in the last edition, will give its first greats this Thursday and Friday concerts in Bogotá, the prelude to a Colombian tour that he plans for next year and in which he intends to remember and honor his origins of which he is proud.

This year for Camilo has been his launch to international recognition, at the height of urban genre artists, with whom he has participated, but preserving his pop style, mixed with Colombian rhythms. “It has been a year full of surprises and full of gigantic things that it is not known which is bigger than another,” he recalled in a virtual press conference from the Dominican Republic where he has some concerts this week before landing in Bogotá.

Camilo will bring the “Mis Manos Tour” this December 9 and 10 to the Movistar Arena in Bogotá, where he will play for the first time in a stadium with capacity for more than 10,000 people in his native Colombia, after having achieved “sold out” in most of his international tour dates. The first date announced in the capital, on December 10, the tickets took just a few hours to sell out, so the 27-year-old singer announced a new date for Thursday.

He considers that it will be a small appetizer of what is coming next year, when he begins a new tour after releasing his new album at the beginning of the year that contains “Indigo”, the song with which he announced to the world that he and his wife, Evaluna Montaner, they were going to be parents. “2022 looks like a year of a lot of things,” advances the artist, who has been nominated for Best Latin Pop Album at the American Grammys.

In this next year, “the first thing is creativity, crystallized in the maximum way of creativity that is the birth of Indigo, no creation greater than that of our first child,” he stressed. The new album explores “more and more with that freedom and with that trust in the roots and in who I am as an artist,” he said.

The album will be accompanied by a tour that will be interrupted by the birth of their first child, but “it is a lapse that we gave ourselves to be able to deepen that tour.” “The idea was to be able to go through all the countries in depth, of course starting with Colombia, going through it as it should be, but with the Indigo news, everything is delayed a little,” he added. “The other year we are already with Indigo in our arms to visit and continue with this tour that began in 2021”, claimed Camilo.

Camilo, for the first time before ten thousand people in Colombia