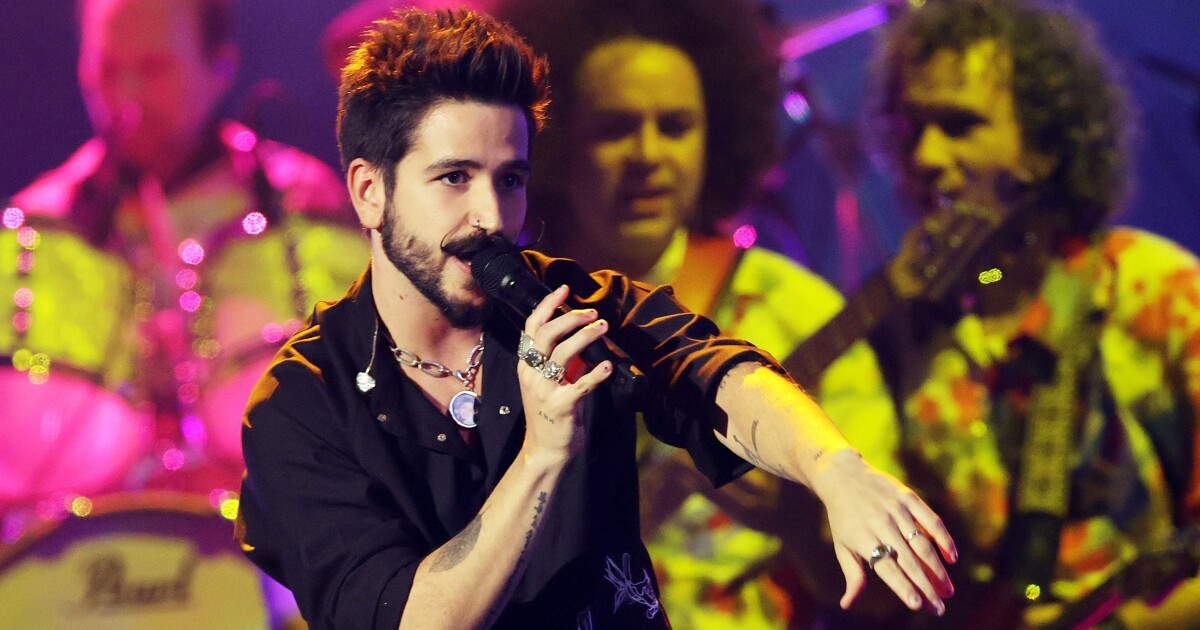 The Colombian Camilo reached the final day of the Latin Grammy, presented this afternoon at the MGM Grand Arena in Las Vegas, as the undisputed favorite of the event due to his 10 nominations; And, at the end of the great celebration, in addition to being probably the artist most focused by the television broadcast cameras, he went home (or wherever the party continues) with the satisfaction of having received four awards, that is, the most wins.

But that doesn’t necessarily make him the biggest winner. In fact, technically, the category of Album of the Year, which is the one that is defined at the end, is the most important, and in that sense, it could even be said that the luckiest artists of the 22nd edition were the legendary Panamanian singer Rubén Blades and the conductor Roberto Delgado, who jointly gave life to “Salswing!”, The valuable work that won this triumph.

Of course, even in this case, the former extended the victory (which definitely serves to give an air of legitimacy to a Latin Recording Academy that has been accused many times of favoring the strictly commercial) to many more people. “Winning an award at the expense of someone else losing has never pleased me,” said Blades on the podium, with his usual sincerity. “We accept this on behalf of all those who are nominated. And I want to thank the team that worked with us, because the success is not only mine, but many people ”.

On the other hand, the general feeling was that the most significant triumph of the night was for “Patria y Vida”, which in addition to performing live, won the Song of the Year award, which was a political move (is it? really the best song of the year in musical and purposeful terms?) that is not surprising in view of the ideological tendencies of this celebration and that there would be nothing wrong if the Academy gave a similar place (or at least a place) to the artistic proposals that denounce the abuses of the extreme right in Latin America.

Strangely, very little time was given to the thank you speech, at least in the television broadcast, limiting it to a few words from the former Orishas Yotuel that served to thank his mother for the inspiration (and all Latin mothers in general) and, just before the commercial cut, to repeat the motto that gives its name to the piece of protest against the Cuban regime.

Unlike what has happened in other editions of the Latin Grammy, this considerably limited the presence of the popular but questioned reggaetón genre in regard to its nominations, causing different forms of discontent; and although Bad Bunny was awarded the relevant recognition given to the Best Urban Music Album due to his work “El Último Tour Del Mundo”, it is important to note that this album is considerably far from the areas of the ‘denbow’.

At a still early point in the show, Eva Luna and Ricardo Montaner proudly presented their husband and son-in-law (respectively) Camilo, the most nominated of the party, who first appeared alone before a set that pretended to be a room, dressed in a species in kimono and barefoot while he performed “Vida de rico” (which had already won the gramophone for Best Pop Song during the non-televised Premiere), and who later moved to another area of ​​the immense stage to show his band in full and indulge in the lively bachatera cadences of “Kesi”.

Almost at the end of the procedures, Yotuel, Descemer Bueno, Gente De Zona and El Funky, who recorded the aforementioned song “Patria y Vida” from different geographical spaces, joined for the first time to sing it live, dressed in white and sitting in the middle of an environment that simulated being surrounded by candles, thus unleashing the majority approval of an audience that seemed to agree with the message they proposed.

In the same final stretch, Blades and Delgado appeared on the tabladillo next to a lavish orchestra (the one directed by the second) to interpret the famous song “Paula C”, embodied in a long version that allowed to show off the skills of the first in the sono arts and the skills of the instrumentalists, and that, when it closed, gave rise to the entrance of Residente, who dedicated a few heartfelt words to his idol before presenting him with the official Person of the Year trophy.

Speaking of the ladies, what the Chilean Mon Laferte did was particularly inspiring, because she first appeared alongside La Arrolladora Banda El Limón to sing “My heart is going to burn,” in a completely Sinaloan vibe; and then, after the curtain fell, she met with a completely female mariachi to perform alongside the Mexican Gloria Trevi the feminist hit “La mujer”. Wearing a beautiful traditional-inspired outfit that she partially shed in the second segment, Laferte proudly showed off her pregnant ‘belly’ and sang with the power of always.

For her part, the Mexican Danna Paola also tried to join the defense of women against male abuse by finishing off the interpretation of her single “Calla tú” with a written proclamation that read “Ni una más”; but he did it through a song that doesn’t really talk about the matter and that, to be frank, is not very good.

Continuing in the channels of empowerment, one of the brightest moments of the night would have to have been the presentation of the American superstar of Ecuadorian descent Christina Aguilera (who now served as a redhead) next to the Mexican American Becky G and the Argentine Nicki Nicole and Nathy Peluso (who wore defiant outfits).

But the truth is that the song they have done together, “Pa ‘mis chicas”, is extremely weak, both in terms of music and lyrics, and that the other song in Spanish that Aguilar presented, “Somos nada”, I don’t know. understood well due to his strong accent in our language.

As has happened in recent editions, the Latin Grammy stage gave a reasonable space to the proposals of the Mexican regional. The roar of the Sinaloan band was first present with Grupo Firme, which had conquered the category of Best Regional Song during the non-televised Premiere in which most of the awards are given, and which offered short versions of their hits “Me gustas “And” Already surpass me “in which his habitual consumption of alcohol on stage was conspicuous by its absence.

Caliber 50 and El Recodo also participated in the event, who joined forces for a particularly joyful segment in which they let themselves listen to “A la antigüita” (created by the former) and “Esta vida es muy bonita” (original of the latter) ; and later, Los Dos Carnales effectively recreated an open-air canteen environment as the visual framework for their single “El envidioso”.

As for the most controversial issue, the absence of the urban genre in the main categories does not mean that its exponents have been absent in the musical presentations of the gala. One of his major figures, Ozuna, had an act of his own that led him to surround himself first with sensual dancers while performing “Del mar”, and later, to interact with the Dominican Anthony Santos in “Señor Juez”, both surrounded by an elaborate scenography It looked like they were inside a huge bar.

And since we are talking about the corps de ballet, it should be noted that everyone who covered those positions in the different acts wore masks, despite the fact that almost no spectators wore them in their seats since the singers did not use them in front of the cameras either.

Returning to reggaeton, the representation of the same style had come before the hand of a sound background orchestrated by the pianist and conductor Sergio George, who first played the chords of the salsa classic “Periquito Pin-pin” and then got involved in the interpretation of “La curiosidad”, a slow reggaeton with references to sex and marijuana in which Jay Wheeler, DJ Nelson and Mike Towers participated.

One of the most original and sympathetic moments of the evening was the one offered by the Spanish C. Tangana, who presented his song “Ingobernable” (rumba trend) using a highly creative format that found him sitting at a table around which he I found an infinity of artists who made choruses and clapped, among which was the Mexican Natalia Lafourcade, who, this time, left the event empty-handed.

Armando Manzanero, who died about a year ago, was the object of an elegant tribute led by the Mexican Carlos Rivera, who was seconded by the Venezuelan Nella and the Colombian Paula Arenas in order to give life to correct but highly conventional duets of ” This afternoon I saw “rain” and “Still”.

Obviously, Juan Luis Guerra, who, at this point, enjoys a favoritism from the Academy that is at least questionable, did not stop showing up either. Alongside his 440, the singer, composer and producer attacked with “Vale la pena” and “El farolito”; and he had the wisdom to pay tribute to the great Johnny Ventura, who died in July of this year.

Going to other areas, the only supposedly rock moment of an event to which the guitar genre seems to be indifferent came in an unusual way from the hand of Juanes, who has always leaned much more towards pop, but this time he invited Rubén Albarrán and ‘Meme’ del Real, by Café Tacvba, to present their recent version of “I don’t have money” -original by Juan Gabriel-, partially broadcast in black and white during the television broadcast with the intention of reinforcing the sixties aspect that was sought and through the coat and tie attire worn by all the participating musicians.

Mana was also featured, of course; But in addition to the fact that the term ‘rock’ cannot really be applied to their work, what the group from Guadalajara did was join their fellow countryman Alejandro Fernández to offer a version of “Mariposa treacherous” that was seriously harmed by some vocal interpretations that They left much to be desired (we assume that ‘El Potrillo’ had a bad throat).

Although we refused to say it, in reality, the most rocker of the gala was the intervention of Bad Bunny, who, almost at the end of the show, used alternative elements and ska when he had to present “Damn poverty”, a song that, to Despite its apparent lyrical simplicity, it is certainly interesting.

The procedures began with a showy and colorful session inspired by the Brazilian carnival that was led by the Cuban-American Gloria Estefan, but which also included the participation of the Argentine Diego Torres, the Puerto Rican Pedro Capó and the natives of the most soccer-loving country in South America Carlinhos Brown and Anitta, who did their thing between samba dancers and to the rhythm of the chords of “Abriendo doors” (original by Estefan) and “Magalenha” (creation of Sérgio Mendes).

Camilo, Blades and anti-Castroism are the most visible winners of a Latin Grammy with little reggaeton