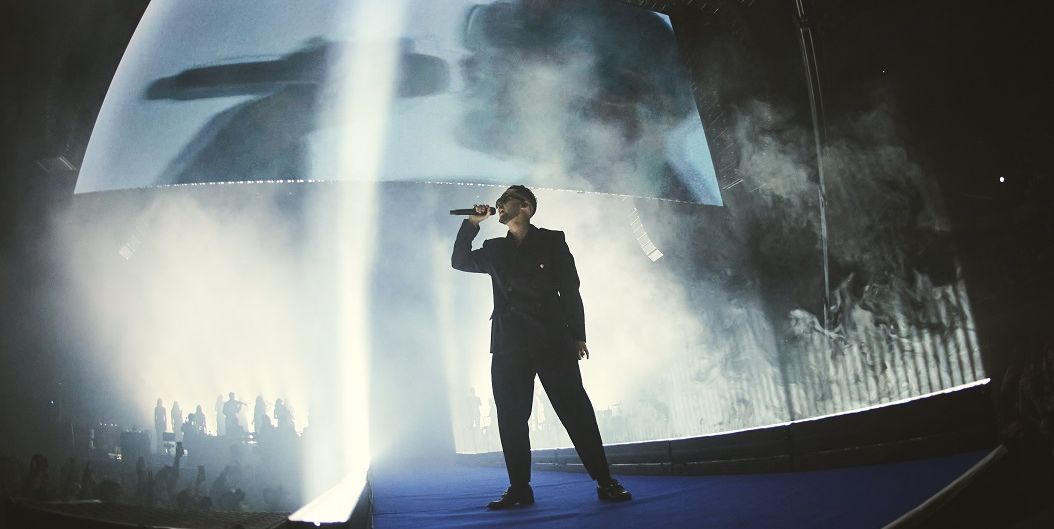 The concert of C. Tangana, Without singing or tuningIt is the experience of the year. We have been listening to it since the tour of The Madrilenian in Malaga so we have gone to Bilbao to check if everything you have heard these days on social networks was true. And yes, it is. That and more. 15,000 new witnesses who were at the BEC last weekend can confirm it, and there are still the concerts in Barcelona, ​​Zaragoza and London.

El Madrileño, Antón Álvarez, Pucho, that is, C. Tangana has created a show that is much more than a concert. And it is that Without singing or tuning drink so much from concerts kanye-west like Broadway musicals and movies. It begins, appropriately, with a curtain drop behind which a Copacabana-esque stage unfolds, filled with tables crammed with bottles of anise, champagne, rum and talent. A waiter comes and goes between them serving drinks, getting drunk, and promoting the show as if it were a television program with C. Tangana acting as master of ceremonies.

C. Tangana may not sing or tune, but he knows how to surround himself with the best and make the audience feel like they’re partying with them. There were about 20 musicians in total between strings, wind and drums, plus the guests that Pucho has incorporated into his band for the tour: La Húngara, El Niño de Elche, El Bola, the Carmona family… At one point they sit everyone at the table to perform, among other songs, ‘Me Maten’ with the same after-dinner complicity that at the Tiny Desk. The performance is directed, mainly, to the cameras of Little Spain, the production company that has made the latest video clips of C. Tangana and that has made this tour its masterpiece, which we hope to see soon in theaters or on a platform; but at all times the public feels that it is among friends, partying.

When the percussion of ‘too many women‘ I felt that chill that I have never noticed in Holy Week. Between that and other great hits of The Madrilenian, a couple of songs from the previous albums and versions of ‘Corazón Partido’, ‘Suavemente’ or ‘Noches de bohemia’ it was almost impossible to find a space during the two hours that the concert lasted to get up and go to the bathroom or for more beers . It all feels so personal in Without singing or tuning that missing a minute was like betraying a friend.

But if we talk about a personal moment, we have to talk about that moment, which not coincidentally sounded before ‘You stopped loving me’. When ‘Before I Die’ was played at the BEC in Bilbao, a current of emotion passed through the entire room. C. Tangana made no direct reference to Rosaliabut somehow it was there. Lucía Fernanda Carmona sang some of the parts of the star of The bad want (and of mommy) and C. Tangana turned the song into something even more exciting than it has ever been. He sang it without Auto-Tune, showing that, if you have to tune and the occasion deserves it, he also defends himself.

For obvious reasons it was a theme that I did not expect to find soon in C. Tangana’s or Rosalía’s repertoire. But of course, it’s also the song that changed everything. Composed by the two biggest stars of current Spanish music and produced by Alizz, ‘Antes de muerteme’ is more than a roneo between the old couple, who in 2016 swore eternal love to each other before they both rose to fame. It also meant the transition of C. Tangana from a rapper that some still knew as ‘Crema’ to the international folkloric pop that today fills the stadiums.

The song then became Carpe Diem of the centennials and ended up on the soundtrack of the Serie Elite. Now she evokes Rosalía, without Rosalía, and produces an I don’t know what when listening to her live. It is as if a cycle has been closed and we are promised that the future is going to be even more exciting, that it is not for nothing that we at Esquire gave C. Tangana an award for the Man Who Looks to the Future.

The future is going to be music and cinema and theater, all together. And it’s going to have El Madrileño on one side and Motomami on the other, but how lucky we are to witness live how each one directs his career along opposite paths. Rosalía sounds like an avant-garde future, while C. Tangana invites us to party with the music of the present and the past, because his is timeless.

C. Tangana: the most personal moment of her concert evokes Rosalía (without Rosalía)