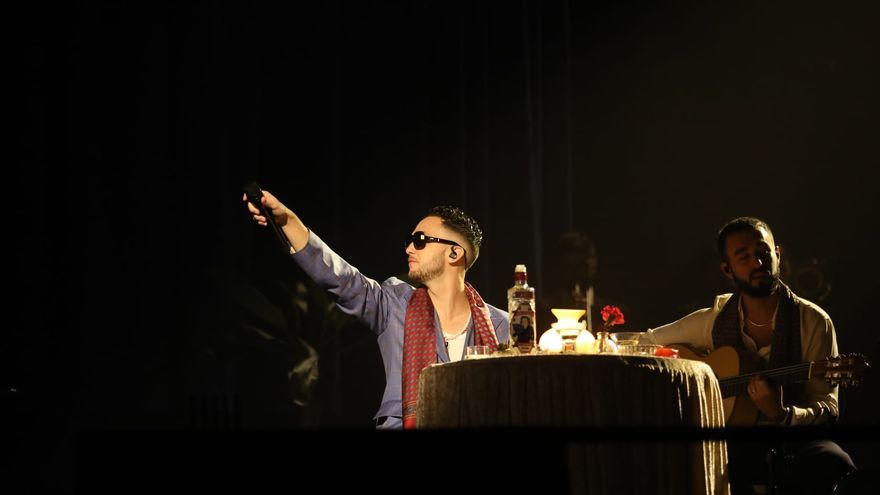 The Principe Felipe de Zaragoza pavilion has attended this Friday enraptured, almost with its mouth open, to a total spectaclean Show which has passed as a very entertaining movie. Because the performance that C.Tangana has led on the stage of the municipal pavilion has been much more than a usual music concert. The artist from Madrid has transcended the term relying on the fundamentals of cinema and theater to put together a great audiovisual blockbuster.

Almost 8,900 people –tickets sold out a long time ago in just a few hours– they have thoroughly enjoyed the great musical event of the year in Spain. And all ‘without singing or tuning’as indicated with great reluctance by the presentation tour of the album ‘El madrileño’which is coming to an end after touring the main Spanish cities and four in Latin America.

With twenty musicians on stage and three huge screens that have permanently captured the public’s attention, Antón Álvarez Alfaro (Madrid, 1990) has donned the suit of C. Tangana and has ridden different palos and styles without flinching. This Friday, at the Felipe, he has been heard trap, rumba, electronic, bolero, pasodoble, flamenco, bachata… And many palms on a set that could well have come out of a Scorsese film (there were tables scattered throughout the club-stage and even waiters serving drinks).

The performance has extended over two hours and has gathered especially young people, but also middle-aged fans and even some retirees. Fans have come from out of town and even from other communities. Like Paula Vargas and Irene Galán, two 26-year-old friends who had come from Logroño and Madrid, respectively: “We ran out of tickets for the concert in Madrid and decided to buy for the one in Zaragoza. They cost us 50 euros but we are sure it will be worth it,” Galán assured shortly before the performance began.

The concert began around 9:15 p.m. with the song ‘Still rapping’, one of the few concessions to the past. Because all the songs that have been played this Friday in Zaragoza were no more than four years old. The man from Madrid, as those attending the concert well knew, has made the leap from urban music to embrace different styles and set aside a bit its origins more rappers and ragpickers. This has been shown shortly after with the songs ‘You forgot’, ‘Cambia!’ (with Carín León and Adriel Favela on the album), ‘Te venero’ (performed this Friday with Rita Payés), ‘Bobo’ or ‘Párteme la cara’.

behind them, the pavilion has collapsed with the first chords of ‘Ateo’, the ‘single’ in which ‘Pucho’ (as he is also known in the scene) sings with Nathy Peluso. It didn’t matter too much that the Argentine didn’t appear this Friday in Zaragoza (Lucía Fernanda Carmona replaced her), nor did other of the most relevant artists who have collaborated on the album ‘El madrileño’ (Kiko Veneno and Jorge Drexler were in the Barcelona concert on April 23).

Those who have climbed on the boards of Felipe have been the Carmona family, Niño de Elche or the singer El Bola. They have done it at the table setting that they have set up in the ‘tinydesk’ style and with songs like ‘Me maten’, ‘We are not crazy’, ‘Noches de Bohemia’ or ‘Joy of living’, with rumba and flamenco taking over the Prince Philip. At this point in the concert, with everyone sitting around the table, the man from Madrid, who began his musical career under the pseudonym Crema with the rap group Agorazein, he has even dared to cover the song ‘Although you don’t know it’, by Quique Gonzalez. “Thank you Zaragoza, we are having a great time. You are an excellent audience”, underlined a C.Tangana who has hardly spoken with the public.

Afterwards, other great ‘singles’ have arrived, such as ‘Llorando en la limo’, ‘Comerte entire’ or the celebrated ‘Tú me dejaste de amar’. And so with an audiovisual production studied in detailthe total show of C.Tangana has been getting closer to his last song of the night: ‘a poison’where it says that “without singing or tuning, so that all of Spain can listen to me” and speaks of his “inordinate ambition”. The one that has taken him to the throne of pop in Spain. To do this, yes, the man from Madrid has been able to surround himself with a great creative team in the ‘backstage’ and (aware of his limitations as a performer) of some artists on stage who exude full authenticity.

C.Tangana in Zaragoza: much more than a concert