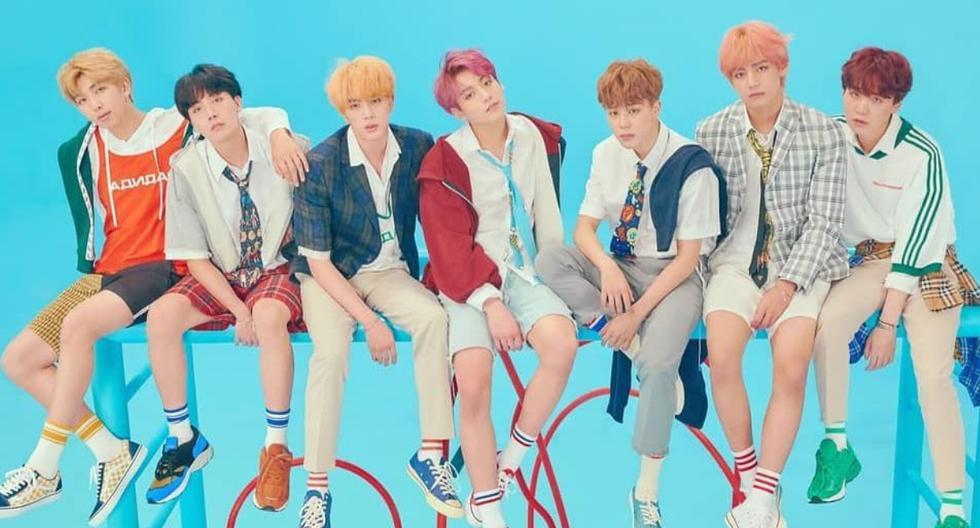 Jin, Suga, J-Hope, RM, Jimin, V and Jungkook are seven young people who since 2013 became famous for being part of BTS, one of the K-pop musical groups that currently generates significant economic profits and has thousands of fans around the world.

With its own style and great choreographies, the natural boy band of South Korea he has managed to conquer the international market with his songs. Despite the fact that these are in their native language, this has not been an impediment for their fans to declare them as their idols.

His fans are known worldwide as ARMY and, precisely, the members of BTS They have great appreciation for their fans who support them unconditionally. The seven young men sometimes share some details with them.

MORE INFORMATION: Who of the BTS members has the most followers on Instagram and who the least

Since the release of their debut album Dark & ​​Wild in 2014, the group BTS has established itself as one of the most influential bands in the world of music, achieving important recognitions such as the Guinness world record.

THE 20 GUINNESS WORLD RECORDS SET BY THE BTS GROUP

Another of the great achievements that the South Korean band has obtained BTS is to have been part of the Guinness Book of World Records, as reported by the website of Billboard.

The TikTok platform was also conquered by the group BTS and since September 25, 2019 they used it to promote “Boy With Luv” with Halsey. In a short time they had 1 million followers.

19. Many viewers for the premiere of a video on YouTube

On YouTube the song “Butter” broke several records with 3.9 million users who were waiting to see the video.

18. The most watched YouTube music video in 24 hours of K-pop

With their third studio album “Love Yourself: Tear” in 2018, BTS managed to rank at number 1 on the Billboard 200 charts for the week ending on May 24. With the aforementioned record label, the band obtained the highest sales in history for a group dedicated to K-pop.

16. The most played song on Spotify in 24 hours

“Butter” was the song with the highest views, reaching 20.9 million times within its first 24 hours of release.

On June 2, 2018, the song “Fake Love” released as a promotional single for the album “Love Yourself: Tear”, reached number 10 on the Billboard Hot 100 rankings. This is considered one of the highest positions obtained by an artist. K-pop after “Gangnam Style”.

14. It was ranked number 1 on Billboard’s Social 50 chart for several weeks.

The group BTS achieved a significant location on the Billboard Social 50. He led the number one spot for 200 weeks. This occurred from July 29, 2017.

13. He managed to be several weeks on the Billboard Hot 100

Another important record for the group BTS was after the release of their single “Dynamite” in 2020. This song spent 32 weeks on the Billboard Hot 100 chart until April 2021 and also spent three weeks at the number 1 position.

12. Several weeks at No. 1 on Billboard’s Digital Singles Chart

The song “Butter” spent 18 weeks at # 1 on the Billboard Digital Singles Chart, as did “Dynamite” which was also on the chart for several weeks.

The Guinness Book of World Records made it clear that the group BTS is currently the band with the most views on the Spotify digital platform. The reproductions reach 16.3 million transmissions.

BTS fans known as ARMY took to social media to comment on their favorite group. Thus, the group won the Guinness World Record for the highest number of interactions on Twitter, reaching 422,228 retweets on the social media application.

8. Most viewers for a live broadcast

During the pandemic, most concerts were held virtually. Given this, BTS held a Bang Bang Con: The Live presentation, obtaining 756,000 fans in 107 countries tuning in to watch the show. BTS won the Guinness World Record title for the most tickets sold for a concert broadcast live.

BTS also achieved another Guinness Record when they managed to sell approximately 4,440,800 units of their album “Map of the Soul: 7” in March 2021.

5. Higher earnings for a K-pop group

Forbes magazine estimated that group BTS made $ 50 million in 2020. This figure placed the group at 47th place on the magazine’s list of the highest-earning celebrities of the year.

BTS also became one of the groups with the most followers on Instagram. This record was obtained in April 2021 after it became known that the group had 40,220,226 followers.

After releasing their album “Love Yourself: Tear”, the group BTS was able to integrate the Billboard Artist 100 chart.

1. One of its members reached 10 million followers on Instagram

Singer V, a member of BTS, managed to have the largest number of followers in the shortest time possible. In just 43 minutes, the artist was able to reach 1 million followers on the platform, and the figure jumped to 10 million in just four hours and 52 minutes.

WHAT IS BTS’S DRAMA “YOUTH” ABOUT?

“Youth” is based on the era The Most Beautiful Moment in Life, which is part of the fictional history of BTS albums, music videos and content since 2015.

It is a fictional series, so many characters will appear that ARMY does not know and who are not related to the group. In addition, the drama will cover important topics and give voice to many stories, as well as the official videos of the group.

“Youth”, The BTS drama, does not yet have an official trailer. However, now that the recordings have come to an end it is a matter of days to see a first preview.

In October 2020, the production unveiled the young actors who would be part of the drama based on the BTS universe. At first it was said that they would bear the same names of the members of the band; however, they decided to change the script due to considerable discontent among ARMY. Next, we present the main cast of “Youth”.

DOES SUGA HAVE AN ORIGIN RELATED TO THE KOREAN ROYALTY?

The real name of Suga, the BTS star, is Min Yoongi, for which he becomes a direct descendant of the Min clan, also known as Yeoheung Min, one of the most influential and powerful in the Joseon dynasty.

The K-pop celebrity, then, it has descendants with the Korean royalty because it was the cradle of important characters of that time, such as the Reina Min, the last empress who had Korea.

In addition, the aforementioned clan was in charge of improving the quality of life in their country, with technologies such as trams, trains, phones and electric light. Because, ARMY he has even speculated that Suga may have been a prince of his clan. More details HERE.

WHAT DID YOU LIKE TO BE SUGA FROM BTS BEFORE BECOMING A SINGER?

During an interview with the magazine Billboard, BTS’s Suga revealed that he always wanted to be professional basketball player. However, the young man could not achieve his dream due to his short stature, because although the South Korean singer measures 1.74It was not enough to be able to perform as an athlete in this sport.

“I really wanted to become a basketball player when I was younger, but I couldn’t grow taller. It is a very sad memory. I am the same height I was in my sophomore year of high school“Confessed the rapper.

MORE INFORMATION: BTS members open their personal accounts on Instagram, find out what was the first thing they posted

BTS: the 25 Guinness World Records set by the k-pop band