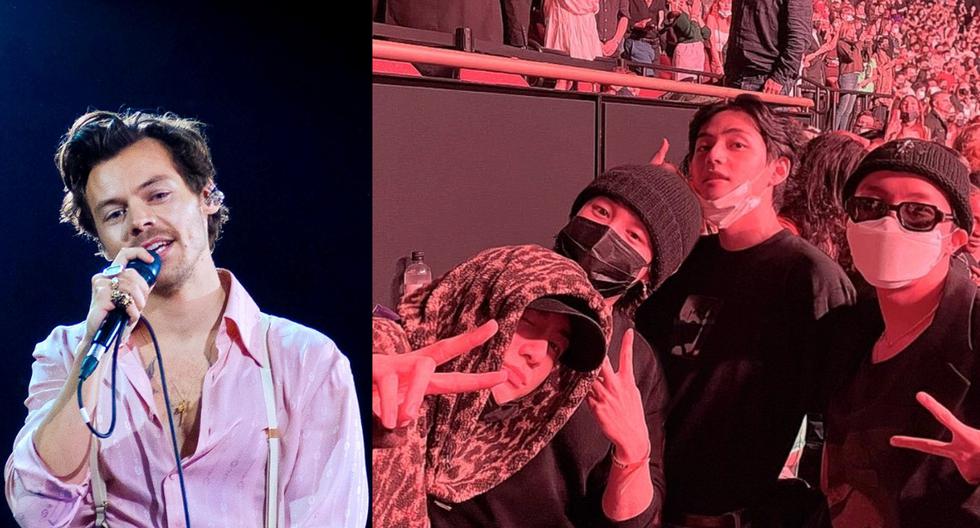 The tight schedule of BTS It did not prevent the young artists from having a moment of recreation and enjoying singing with feeling the songs of Harry Styles. Bangtan’s visit has been the most talked about of the November 19 presentation in Los Angeles.

LOOK | BTS: The story of how an ARMY was surprised by V at his house

READ ALSO | BTS: The Heartbreaking Story Behind “Purple Day” And What It Means

The members of BTS: Jimin, J-Hope, V y Jungkook they visited Harry Styles, the interpreter of Golden and former member of One Direction, who is on his world tour “Love on tour”. The assistance of Bangtan caused a commotion and a stir on social media, not just from ARMY but also because of Styles’ fandom, since; the artist received the idols with great affection.

LOOK | BTS: The Story Of How Jungkook’s Mom Predicted The Bangtan Singer’s Success

What anecdote did BTS experience at Styles’s concert?

Bangtan is on North American soil due to a series of awards, interviews, presentations and pending concerts throughout November and December, which prolongs its stay in The Angels. Thus the boys of BTS took advantage of their availability to attend the concert of the interpreter of “Watermelon Sugar”. What they did not imagine is that Styles would greet them from the stage and that they would meet another star, who considers himself ARMY.

LOOK | BTS: What will the boyband do in Los Angeles? Know your complete itinerary for the end of the year

Styles threw a flower -as a welcome- in the direction of the BTS guys, who were in the company of Lizzo (a close friend of Harry):

BUT WATCH THE INTERACTIONS WITH Harry Styles AND JUNGKOOK, TAE, JIMIN AND HOBI 😭😭😭
I THROW THEM A SUNFLOWER
I’M CRYING@BTS_twt
pic.twitter.com/QO8hqK43AM

The members of BTS wanted to go unnoticed at first, which in the end they did not achieve because ARMY does not miss anything. His clothing reveals a lot of discretion: Jimin was dressed in black and well covered with a black cap and a black mask of the same color. J-Hope’s outfit consisted of a black blazer, a black cap, mask and glasses. Jungkook wore an animal print shirt, a black cap, a mask. Lastly, V was the least concerned of them with a classic jean, black polo shirt and mask.

LOOK | BTS: Bangtan’s pets, how many are there and what are their names?

Some photos of their looks:

The low-key looks didn’t have the desired effect, and then the idols stopped worrying about being recognized and enjoyed the live concert. They even dared to sing along with the fans while being recorded by them. Jimin, J-Hope, V y Jungkook they ended up being the sensation of post-concert networks. At first glance, the interpreters of Permission to Dance They are big fans of Styles and his music, which inspired Jungkook to make a cover that conquered the hearts of directioners and armys.

LOOK | BTS and Coldplay present “My Universe” at the 2021 AMAs: When and where to see it live?

How did you meet Harry Styles?

The concert of November 19, 2021 It will be remembered by both fandoms as an unprecedented event. BTS’s first contact (of which we are aware) with Styles and his music was after the cover del single “Falling”, what did he do Jungkook. Falling, one of Styles’ biggest hits, from his second album Fine Line.

Although we do not know if the singers have had the opportunity to speak or to perform in person, the good vibes between them have hinted at a good relationship and a probable future friendship and who knows? a collaboration could also be an option.

BTS members chanted at the top of their lungs Falling and they danced to other Styles hits like Lights Up. ARMY enjoyed every second watching their idols having fun and having a good time. We share a compilation of Bangtan in the whole concert of “Love on Tour”:

The Bangtan members themselves did not miss the opportunity to post their best moments at the concert. J-Hope recorded his teammates to later share the moment with ARMY:

At the same event, Bangtan was able to meet rapper Lizzo, who has previously declared her admiration and desire to work with BTS. Together with Lizzo they starred in some photos. A part of ARMY does not approve of Lizzo due to certain behaviors and outdated comments about the BTS members, despite that, everything seemed to go quite well between the boys and the rapper. They are currently following each other on Twitter.