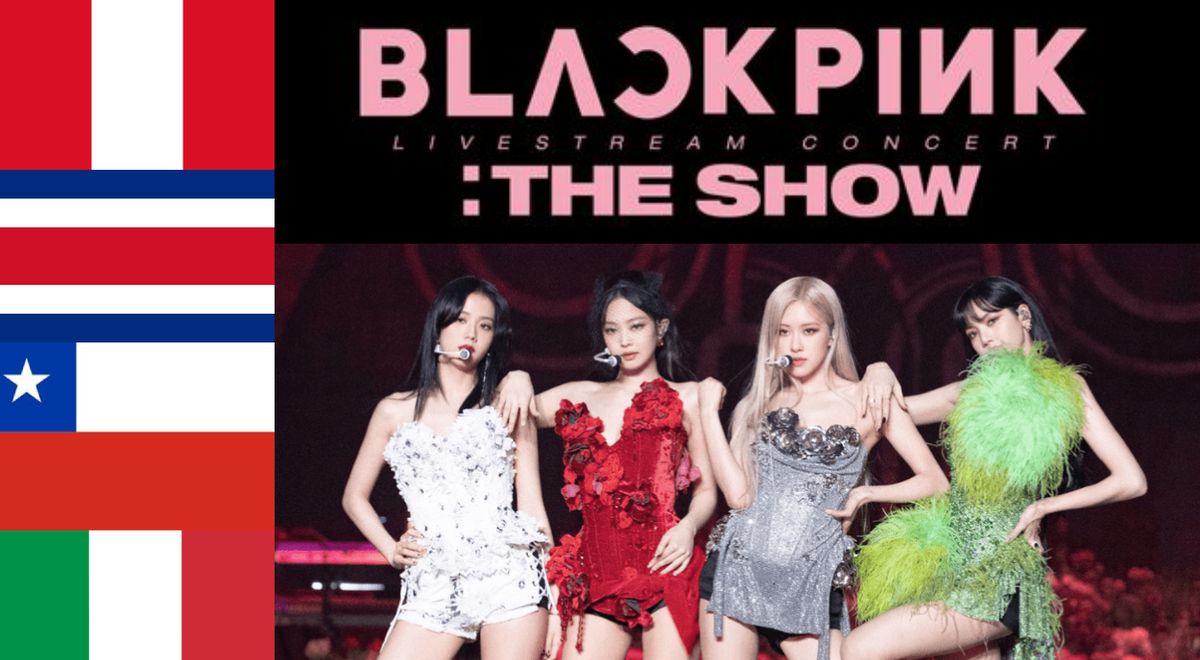 BLACKPINK The Show it will arrive on television in Peru, Colombia, Costa Rica, Chile and more Latin American countries. BLINK from Mexico will also be able to join this experience, after having seen Sunday, August 8 the open signal premiere of the musical show.

When and what time to see the concert of BLACKPINK? What channels will broadcast it? Find out here the answers to these and other questions about the transmission.

The original broadcast of the musical was made in January 2021 by YouTube.

As YG Entertainment later shared, the show recorded “the largest number of live concert audiences ever assembled by a group of girls from K-pop in the history”. In total, they were summoned by Lisa, Jisoo, Rosé and Jennie 280,000 membership subscribers worldwide.

BLACKPINK The Show It included performances of the group hits that BLINKs love the most, but also surprises by each of the idols in their solo turn.

When to watch BLACKPINK The Show on EXA TV?

EXA TV, of the Mexican conglomerate MVS Televisión, will be in charge of bringing BLACKPINK The Show to Latin America and the United States on Wednesday, August 11. The aforementioned channel announced this surprise on the night of the 8th, in the context of the fifth anniversary of the girlband.

In which countries will BLACKPINK The Show be broadcast?

The Latin American countries that will be able to enjoy the musical, according to the details of the channel, will be: Argentina, Chile, Colombia, Costa Rica, Ecuador, El Salvador, Guatemala, Honduras, Mexico, Paraguay, Peru and Uruguay.

Check with your cable TV provider for the EXA TV signal.

Where to see BLACKPINK The Show by EXA TV?

EXA TV is available in Mexico on Channel 154 of Dish, 632 of Megacable and Claro TV. This last mentioned medium will take the show of the interpreters of “Lovesick girls” to the other countries of Latin America.

Times to watch BLACKPINK The Show by EXA TV

Check here at what time the transmission will start according to the country where you are.

With the excitement for BLACKPINK’s concert still on the surface, BLINK spread that the show is available in full on YouTube. However, it is not a company publication.

Apart from this transmission of the concert The Show, fans in Peru are getting ready to the premiere of BLACKPINK The Movie in theaters. After several weeks of mystery, three national channels confirmed the screening of the musical film.

What will the idol movie bring? You can see here fragments thanks to the official trailer.

BLACKPINK The Movie pre-sale in Peru

The companies Cinemark, CineStar and MovieTime have already opened the presale for functions of BLACKPINK The Movie en Lima and other regions of Peru. Visit the website of the cinema of your choice to purchase your tickets.

BC CARD has released a promo video featuring BLACKPINK. Previously, the company announced its collaboration with idols for the launch of new credit cards.

Recent K-media article reports that Lisa’s debut is set in the last quarter of 2021, and that it will take place ahead of a group comeback enlisting BLACKPINK.

Regarding the content of the maknae material, the mystery continues to be maintained, so there are no major updates other than that could include a collaboration with DJ Snake.

The aforementioned DJ commented with three hourglass emoji in one of Lisa’s recent posts on Instagram. Fans have interpreted this as a clue that there would be news of their collaboration soon.

On the other hand, previously a financial report from a Korean company spread that Lisa’s debut would include several songs among which, in addition to the alleged collaboration with DJ Snake, there would be a feat with the American Megan Thee Stallion.

Regarding the aforementioned, it should be noted that YG Entertainmente has not issued any position. Meanwhile, fans are excited to share what a duet between these powerful rappers would sound like.

They cannot be absent from the list of nominees. BLACKPINK is present among the contenders to win the K-pop category of the MTV VMAs 2021. BLINK’s idols compete against BTS, MONSTA X, TWICE, and more.