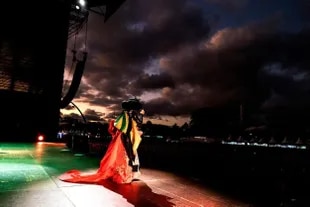 He says björk in the verses that open Fossora (his most recent album) that “our differences are irrelevant, that they are excuses for not connecting”. And in the first 15 seconds of music of that same song, which lasts one story on Instagram, he connects the dissonances of six bass clarinets with a reggaeton rhythm, which first appears fragmented to consolidate later. A small sample of how the Icelandic artist who will perform this Wednesday at Primavera Sound has designed part of her aesthetic ethics: more by contrapuntal construction than by opposition and negation of opposites. Acoustic instruments and digital programming. Vanguard and accessibility. Fantasy and realism.

Born in Reyjavik, Iceland, on November 21, 1965, Björk was a prodigy from an early age who attracted attention in her native country. At age 11 she recorded her first self-titled album and appeared on local television to lead a Christmas carol with her classmates from the Reykjavik Children’s School of Music. But little Björk would impose her conditions, or her disquisitions, ever since. “I felt like I was lying to them, it wasn’t my music, I just put my face on it,” she told Rolling Stone in her latest interview. And so she continued to study classical piano and flute. Between the late ’70s and throughout the ’80s, she formed punk groups, other jazz fusion groups, and graduated from the conservatory. In almost all of her projects, she released discs very much in line with the DIY (Do it Yourself or, in Spanish, Hazlo Tú Mismo) spirit of the time and made her first appearances in movies. Even in 1990 she published Gling-Glo, a vocal jazz album with most standards of the genre sung in Icelandic.

But all this is prehistory for her who, as a position taking and delimitation of her career, in 1993 released an album entitled Debut. As if, already aware of where he wanted to point his career, he had been willing to build a career under his own terms and conditions. A pop star run from convention, living out her own digital psychedelic fantasy.

Among Debut Y FossoraBjörk’s journey consists of 10 studio albums, in which each one works as an escape from the previous concept, not as a denial but as a possibility. If an album raises a possible fantasy, the next one raises another, just as possible, but distant, at least, in conception. So yes Fossora is what she called “a mushroom record” insofar as its sound takes root and settles on the ground (from the programmed bases to the bass clarinets that emphasize the low frequencies), the previous one (Utopia) had been “a cloud record”, due to the ethereal sound, structured mainly from wooden flutes, and an imaginary that had more to do with a fantasy in the sky. The presentation of that album, published in 2017, had the Argentinian Lucrecia Martel as the integral director of the staging, in a fact that also shows the breadth of the Icelandic’s gaze. But in turn, Utopia was for Björk the natural reaction to vulnerability (2015), an album in which the singer started from the hyperrealism of recounting her divorce (in each letter of the album it was clarified at what time, before or after, the separation had been written) in a drama conducted by a string orchestra very numerous and the disruptive beats of the Venezuelan Arca. And if the setback continued like this, the variants and distances between one disc and another could be retraced. It is a dialectic that shows that a given sound can correspond to more than one opposite, or, better still, more than one answer.

And if we go to the 90s, where Björk established work and person, we will have that those counterpoints also gave her her own hits. Freak and popular, her dissonances and extravagances were paraded on MTV and swam among sharks (from Michael Jackson to Madonna) and opened waters to reach the whole world. “Venus as a Boy”, “Hyperballad”, “It’s Oh So Quiet” and “Army of Me” they were the bunch of bastard pop gems with which he became an international star. Behind his affected voice and with a rustic English in which the R and the T sound louder than they should, there were jazz arrangements, vestiges of industrial beats, dance sequences, post-punk substance and even details of twelve-tone music, all led to high rotation. In 2000 she sang at the Oscars and in 2001, her appearance at a Grammy was also a statement for her. Her dress in the shape of a swan and the distribution of eggs on the red carpet were her way of making the massive exhibition a performance with a concept and a message. “I was very aware that this could be my first and last time at an awards show. So I thought my entry should be about fertility,” she recounted of the ceremony. The fertility of that action was confirmed by the various subsequent reproductions of her dress, the rebound that she had in the media and her permanence in the pop imaginary as one of the great appearances in a similar event.

Björk then established herself as a beacon for any artist. Many times a lighthouse to venerate more than the one to use as a guide. As she had done with Bowie, they were the example of how an artist could go from the hit to the unassailable many times on the same album, and many times also simultaneously. As if the approach and especially the final result were more risomatic than related to the thesis-antithesis dynamic.

Of hippie parents and punk spirit. Björk knew how to make her upbringing and her journey a syncretism and a worldview that, far from denying and opposing both positions, put them in dialogue and build something as unique and singular as her own career. One of the great artists in the history of popular music, she owns a work that is difficult to compare or relate. Her albums are already events in themselves, deformed ways of traversing reality to return an image that no one but her could have imagined.. If originality is the first thing that is asked of a creator to assess the relevance of a postmodern artist, Björk has made a school of putting that category as a priority in her career. And for this, she did nothing more than build from the differences, from the union of sounds that nobody imagined possible to unite. Everything that happens from then on is the magic of an alchemist who, moreover, never stopped being pop, although her popularity has sometimes eluded her. Minor data for someone who never focused her search on it.

Björk: put Iceland on the world pop map, provoked the industry with her intervention at the Grammys and made the avant-garde her flag