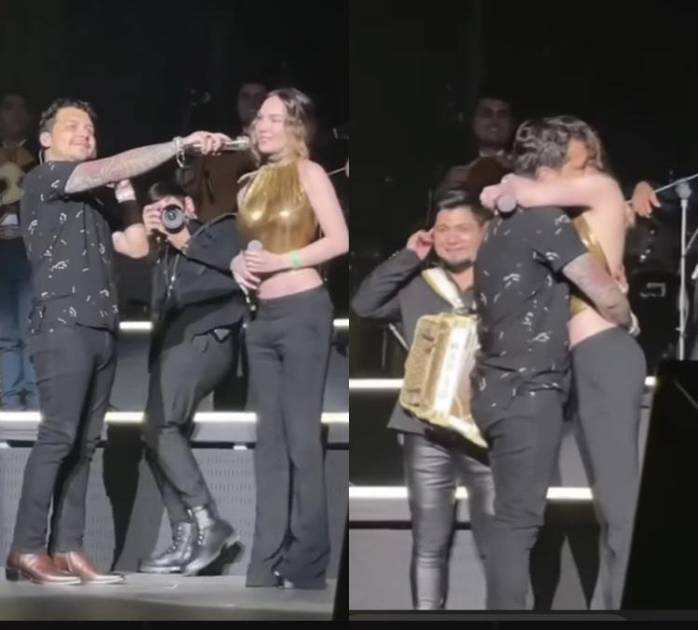 The rumors of the breakup between Christian Nodal and Belinda ended, after they were caught in a restaurant in Las Vegas, this Tuesday the singer took the stage at her boyfriend’s concert in Las Vegas, Nevada.

The Sonoran singer appeared this Tuesday in Las Vegas, on the occasion of the celebrations of the Independence of Mexico, and there his fiancee was seen, ending the rumors that began when Christian Nodal deleted all his Instagram posts, and the couple was stopped following on this same social network.

Attendees captured the moment when Belinda took the stage in full concert to kiss him and thank the audience for their attendance.

The video was spread through social networks, even Celia Correa, wife of Poncho Lizárraga, who went to the concert, shared that moment in their stories.

In the Instagram stories that Celia uploaded, you can see how the interpreter of Bottle after bottle he begins to chant the name of “Beli” with the audience, until the singer takes the stage and fills Nodal with kisses.

The singer hugged her fiancé tightly and later thanked the attendees. He also took the opportunity to share the famous cry “Long live Mexico!” in honor of the dates.

On the other hand, in other videos the actress is also seen among the public, singing the songs of Nodal, this before Belinda took the stage in Nodal’s concert.

The comments were immediate and although many were excited to see the two celebrities together again, others did not let the moment pass to point out that Nodal seemed to pick his nose in the middle of an emotional moment.

This is not the first time that Belinda took the stage in Nodal’s concert, in fact, whenever she accompanies him, she usually takes the microphone for a few seconds to thank the audience and this time she looked as in love as each of the previous ones.