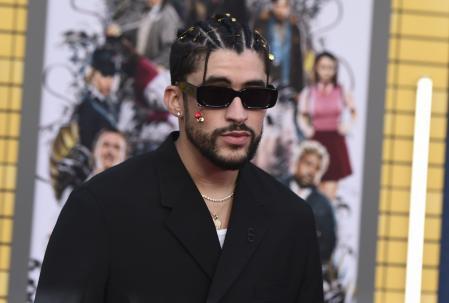 There is no longer any doubt: when in the future critics try to fix the memory of what was the era of the urban music/streaming pairing; the name of Benito Antonio Martínez Ocasio, better known as Bad Bunny, it will appear in capital letters, with underlining and bold. As minimum.

His ten award nominations Latin Grammys 2022 from this past Thursday, which included categories such as best recording, best album or best rap song, is just a new sample. Accustomed to topping all the charts and breaking all the records, the 28-year-old Puerto Rican also surpasses artists of the stature of Rauw Alejandro, Jorge Drexler or Rosalía here.

A night in which there were no surprises, because the artist managed to win no less than five gramophones, including Best Urban Song for marmoset asked me (also awarded Best Urban Performance), Best Rap Song for of museum, Best urban music album with a summer without you and Best Reggaeton Performance for I’m sorry BB:7with Tainy and Julieta Venegas.

From packer to planetary star

And it is not unreasonable to affirm that he is a key artist to understand the revolution in the industry in the last five years, both in youth tastes and in regards to its diffusion. Everything in his short but meteoric career serves to explain what has happened: a youthful mix of trap, reggaeton, Caribbean rhythms and forays into the most conventional pop, and an indisputable ability to sell it through the new channels of promotion and distribution of Pop music. That is, the trinity social networks-Spotify-Youtube.

Born in 1994 in a modest neighborhood of Vega Baja, this shy young man and admirer of Daddy Yankee began in music by combining his first works released by the SoundCloud platform with a modest job as a packager in a supermarket. From there to stardom in just one year: 2017. And until today, he has a vast curriculum in which 95 singles stand out, including his own and collaborations, making it clear that today’s music is no longer dominated by Long Play records. but rather the meticulous serial launch of endless singles.

His fourth studio album A summer without you Launched last spring, it is the latest example of this brilliant success. In record time, the Bad bunny It swept the main platforms: more than 1,200 million views on YouTube and 3,000 million reproductions on Spotify, which is estimated to result in profits of around 12 million dollars. Only in two months. They were astronomical figures, far superior to their main competitors in the constellation of pop stars, be they called Harry Styles, Shakira or any K-Pop artist worth their salt. And all this overcoming any language barrier.

And the worst -or the best- is that Bad Bunny seems to be getting used to repeating success after success. In 2021 he managed to become the most listened to artist on the planet on the swedish platform, with more than 9,100 reproductions. He had already achieved it in the 2020 pandemic and this year he is on his way to the same. He collects nominations and awards -more the former than the latter- and his influence transcends the merely musical: his extravagant outfits set trends and his critical opinions are gaining more and more followers, especially among the very young.

A reggaeton with more message

In fact, Bad Bunny can also be credited -or at least he is one of the culprits- for changing the image of urban music. Although he began by reproducing some of the most reviled clichés of reggaeton -vulgar and macho lyrics-, the truth is that he has been truffling his discourse of criticism and social conscience without losing his rogue image.

Especially interesting has been his claim to the LGTBI+ collective. In 2019 he was very critical of his countryman Don Omar for the macho content of his lyrics and in 2020 his appearance on Jimmy Fallon’s show, the late night most popular television show in the US, in which he denounced the murder of a trans woman with the following slogan printed on her T-shirt: “They killed Alexa. Not a man in a skirt.” Her own style reflects this concern: she usually puts on makeup or paints her nails in order to end gender stereotypes and whenever she has the chance, she vindicates it.

It is also widely remembered that, along with other artists from his country such as Residente or Ricky Martin, he joined many of his compatriots in a protest in the streets that demanded the resignation of Ricardo Rosselló as Governor of Puerto Rico. And they got it. Likewise, he also regularly claims his Latin American roots and is very critical of the segregation of Latin music in the US.