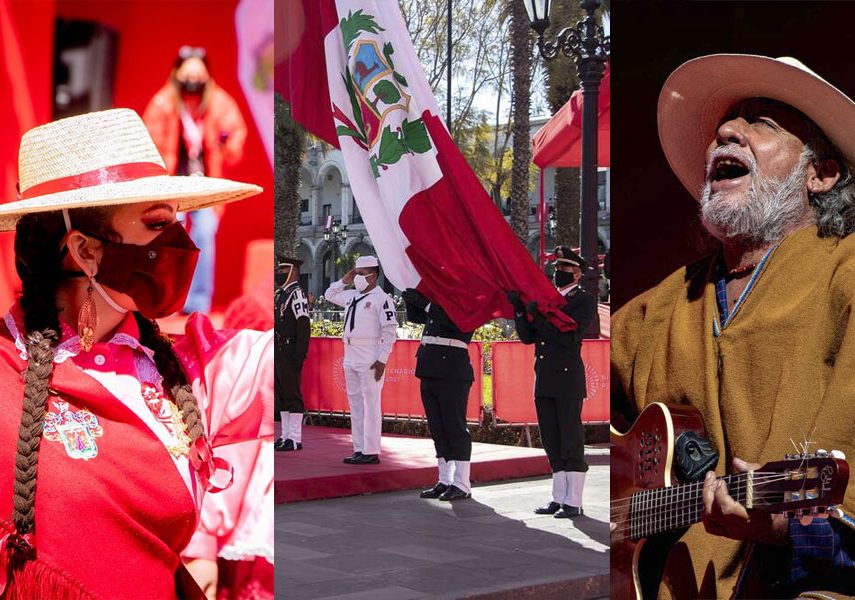 This July 27, the Plaza de Armas was the scene of the protocol and cultural program with which Arequipa commemorated the 200 years of Independence of Peru. Flag raising, staging, typical dances, music, color and art were the central elements of these celebrations for the Bicentennial.

The Provincial Municipality of Arequipa, in coordination with regional and national authorities, gave rise to a series of cultural activities in the vicinity of a totally red-and-white square. To avoid crowds and COVID-19 infections, the entire itinerary was broadcast on the social networks of the municipality and all the media that were present. “United for the Bicentennial” is the name of the national program in which our city was also present, to pay tribute to the homeland.

The day began with a traditional Tedeum mass in the Cathedral presided over by Monsignor Javier del Río Alba, with the presence of the provincial mayor Omar Candia and the regional governor Elmer Cáceres Llica. At the end, they moved to the stage to begin the raising of the flag and the salute of the military and police forces.

The surroundings of the Plaza de Armas were filled with soldiers and, as protocol dictates, the escorts moved at a redoubled pace to perform the respective salute between authorities. Willian Flores Zúñiga, Major General and Arms Commander, was in charge of the order speech and emphasized and honored those who left us due to the pandemic.

After the formal salute to the flag, the cultural activities began by various artists from Arequipa. The first number was in charge of the Arequipa Symphony Orchestra, conducted by Enrique Victorio Ovando, who opened the artistic gala with the waltz “Silvia” by Benigno Ballón Farfán. The musicians interspersed their presentations between each of the numbers that were being presented.

Theatrical acts were the main attraction of the festive morning. The first of them was the staging of the execution of Mariano Melgar, an Arequipa poet who gave his life not to betray his homeland.

“I don’t want the bandages, you have them. They do not realize that in 10 years the country will be free. I am ready to die. For my country! For freedom he must lose his life! “

The last words of the Arequipa hero and poet, Mariano Melgar Valdivieso

The dramatic and well-interpreted scene culminated with symbolic shots by Spanish soldiers, dropping dead and the waltz “La Partida” playing in the background.

One of the most memorable moments of our liberating past was the meeting between Simón Bolivar and Don José de San Martin in Guayaquil. To the sound of “Chicha”, a characteristic theme that the liberators sang with lyrics by José Bernardo Alcedo, the artistic number began. The verbal confrontation between both characters, culminated with the proclamation of the Independence of Peru.

Sacred letters of the Bicentennial

In the middle of a scorching sun, after noon, all those present stood up to effusively sing the sacred notes of the National Anthem of Peru. The presentation was in charge of an Arequipa opera singer, who played the remembered Rosa Merino. Check it out below:

Of course, the respective speeches of our local and regional authorities could not be missed, both by Omar Candia and Elmer Cáceres Llica respectively.

The colorful cultural day was closed with a flourish by the Folkloric Ballet of the Municipality of Arequipa. A mix of montonero and marinera from Arequipa by young dancers sealed the event in a 10-minute demonstration. In the middle of the number, an armed forces cannon was symbolically detonated.

Enjoy the presentation of the group of dancers below:

Once the cultural program was finished, the Arequipa authorities went to the corridors of the Provincial Municipality’s portal to carry out the long-awaited unveiling of the Bicentennial plaque.