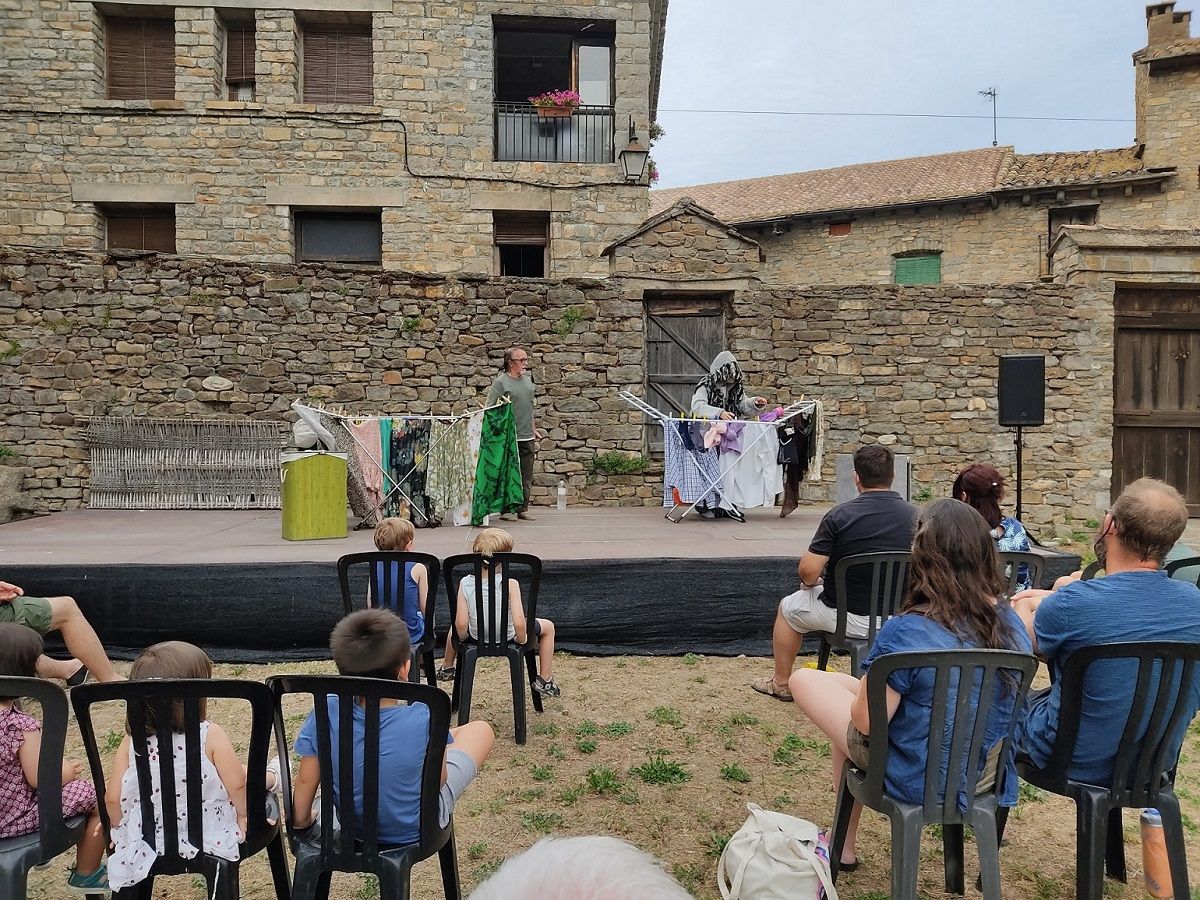 Concludes the third weekend of Castle of Aínsa Festival and it does so passed through water. The intense heat endured in recent days could not resist the temptation of a refreshing rain that erupted at the worst moment: a few minutes after the start of the concert of the Zaragoza Vegetal Jam.

Although initially everything seemed to indicate that the plan could be resumed, the intermittent rainfall forced Miguel Guallar (cello and violin) and David Aznar (accordion) to cancel the performance, that still kept a large group of people waiting patiently in the moat of the Castle. The artists and the Festival management agreed to postpone the meeting for next Sunday at 9:00 p.m. in the same place.

Just two hours before, at 7:00 p.m. La Machina Teatro offered its family show in the Courtyard of the Museum. Nothing made one think that heaven would end up playing a trick on his fellow cartel members. The Cantabrian duo he surprised with a traditional staging: the roof terrace or the patio of a community of neighbors in which two residents meet to collect the laundry.

Lucía and Daniel have not seen each other for thirty years, but a purple towel turned into a doll takes them back to the woman’s childhood, to the time when they played to represent the tale of Molly and the Giant. As in a kind of time machine, the characters park reality for a few moments and engage in a story of adventure, mischief and parties that takes place among the clothes hanging on the clotheslines.

Proving that with little you can create a great story and in a display of simplicity and originality, the actors captured the attention of a very heterogeneous audience. The tickets had been sold out hours before the show and the result gave the reason to those who bet on the offer of the veteran company. Thus ended a weekend of interesting encounters in which an amalgamation of theater, puppets, circus and music occupied three intense days. Ahead of two more weekends, keeping the bar at the level of his unconditional followers.

Family theater and two concerts on the fourth weekend

On Saturday, July 17, the family audience will once again be gifted. The first proposal comes from the hand of Trapusteros Teatro, a duo made up of Marcos Pena from Aragón and Izabela Brochado from Brazil, who will be accompanied by their mamulengo puppets at 6pm in the Parque de los Nabateros. The second proposal will be carried out by the Riojan company El Perro Azul, at 8:00 p.m. in the Patio del Museo, also aimed at the same type of public.

The Orquestina de la Abuela Pina, arriving from Segovia, will close on Saturday night. The Castilian Dulzaina, the drums, the trombone, the chotis songs or the pasodobles are intended to be a tribute to the elderly after a fateful year for this sector of the population. The band will be in the pit at 10pm.

We will thus reach Sunday 18, the moment to listen to a traditional story, “The three little pigs”, in the purest style of the Valencian company Producciones Xarop. It will be at 7:00 p.m. in the pit. It will be followed by the aforementioned Vegetal Jam concert starting at 9pm.

The invitations, as always, available 72 hours before the start of each activity. Reservations in www.festivalcastillodeainsa.com