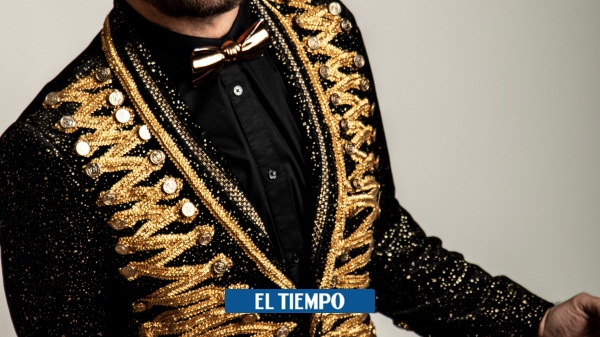 Aleks Syntek He has been doing what he wants for three decades, far from –and even against– the musical establishment, regardless of whether they judge him or leave him out of what is ‘sounding’. We would say that he has done what he wants.

“I have stayed true to my essence,” he tells in a talk with EL TIEMPO. As I have not been in a particular place, the currents come and go and succumb to fashion, and my music has never corresponded to that ”.

Raúl Alejandro Escajadillo Peña – himself Aleks Syntek– is one of the artists of the Cassette Festival this Saturday, December 11 at the North Highway Events Center (tickets at Tuboleta.com) and will include in his repertoire classics that made him shine: I dreamed of you, What you need, Love hurts, The road, My impulses about you, At night in the city, For seeing you again and Sex, shame and tears, for mention a few.

(In context: This is Cassette, the other great music festival)

The Mexican singer and songwriter, famous for not mincing words, spoke about his presentation in Colombia, his career and his most recent album, Anatomy of love.

What will that return to Colombia be like?
​
I have missed the Colombian scene very much and I am happy to be with you, sharing with very important artists: my countrywoman Paulina Rubio, Los Toreros Muertos; from the Anglo-Saxon world, C & C Music Factory and Information Society, and from Colombia, Los Aterciopelados, an emblematic Latin American rock band. The Cassette Festival is very varied: there is pop, there is rock, electronics … it is incredible and we are going to present pure hits, so the public will be chanting and dancing all night.

What is the secret to staying current for more than three decades?
​
The important thing is that I have stayed true to my musical philosophy, to what I do; I created my own niche, but not right now, but since I started, in the 90’s, and I have always carried my musical history, which I like to do. I remember an anecdote that helped me a lot: I had the opportunity to open a concert for Soda Stereo when they were in Mexico. When I was next to Gustavo Cerati I commented to him: ‘Gustavo, I’m worried that they don’t see me as part of rock in Mexico, that they don’t take me into account.’ And his response surprised me: ‘They don’t take Soda Stereo into account either. the Argentine rock movement, and in fact they reject us and label us corny. There is no choice. Make your own story, worry about your niche, about your musical proposal and that the world rolls, you should not be interested in being in a musical current ‘.

(What’s more: The incredible story of the dead bullfighters and their reunion with Colombia)

And that is precisely what has happened, I have not been in a particular place. In this time, when everything is urban, everything is reggaeton, I have not joined that trend because I continue to | do my thing the way I like to do it, and I think that is the most important thing: to be faithful to your music.

I consider the urban as a musical dictatorship because it has left out the bolero, salsa, cumbia … all musical genres have been displaced and only what is heard is urban, and that is not right, there has to be a variety , a musical diversity; if not, this becomes a condemnation. It is not cool (good) that the public is condemned to hear the same thing all the time.

There is a theme of gratitude with my songs, I love them, I defend them. Whenever I compose songs I am aware that I am going to have to sing them many times and that I cannot get fed up

Let’s talk a little about Anatomy of love …
​
It is an album with all the essence of Aleks Syntek; in fact, my wife says it’s the best album of my career, the one she likes the most. For some reason I feel that I returned to the essence of my first albums, it may be because in my quarantine nostalgia has taken hold of me and I have retaken the sound of past decades. The truth is that it is a very varied album, with very energetic songs, with a lot of social commitment, such as The Extinction of Species, The Dreams of the World, The Symphony of Creation, The Child of Silence; and other more romantic songs –Anatomy of love, Eclipse of the moon, I saw you, Life takes me–. There are songs with a lot of vibes like Wake Up, which sounds very funky, in the style of What you need, and that brings that message that awakens the conscience and that the moment is the here and now.

(Read also: Camilo’s two nights ‘sold out’ at the Movistar Arena in Bogotá)

We imagine that he will privilege his classics at the Cassette Festival
​
Yes, although I will sing my latest single, Eclipse de luna, to give you an idea of ​​what Aleks Syntek of 2021 is all about. I don’t want to focus on 90s nostalgia, there is a lot to choose from my repertoire over the decades from 2000 and 2010.

How do you reinterpret your great classics today?
​
There is a theme of gratitude with my songs, I love them, I defend them. Whenever I compose songs I am aware that I am going to have to sing them many times and that I cannot get tired of them; so I try to make songs that have a very positive vibe. That is one of the things that I feel with current music, there are too many songs that vibrate low, that depress me, I try to be in the line of making music that excites you, that gives you faith, that gives you hope, that turns you on the battery.