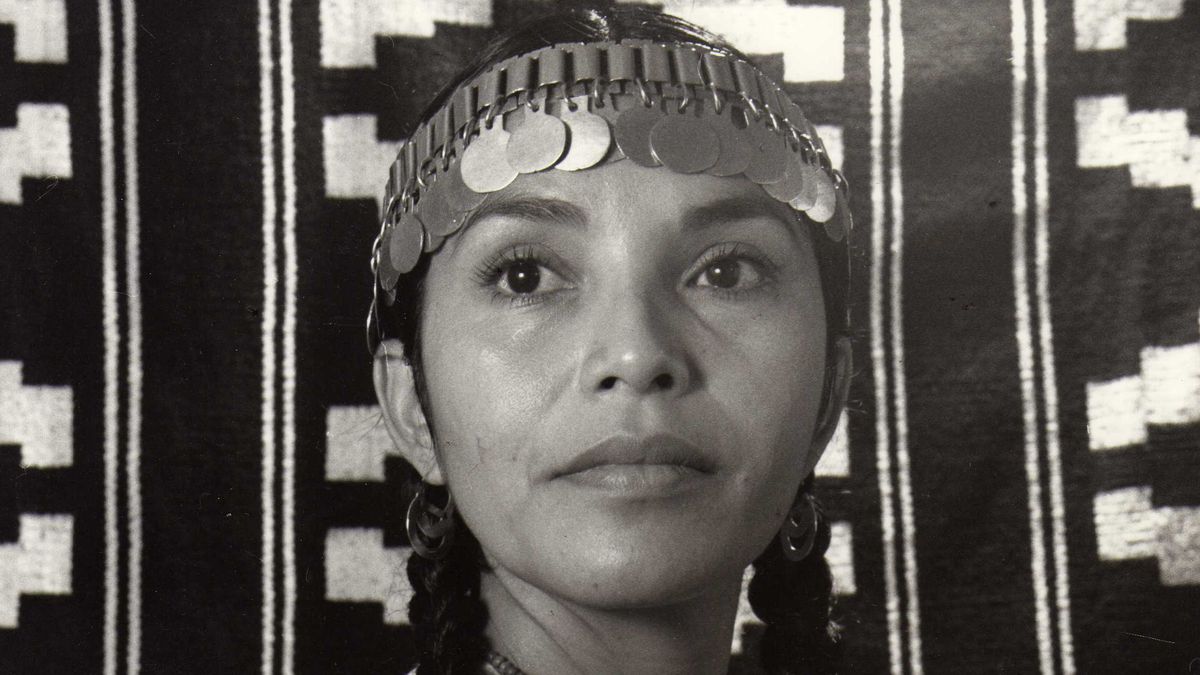 Aimé Painé is part of the history of the women most prominent of Argentina for its dedication to the Mapuche culture. Separated from her native indigenous community at the age of three, her life was always a search for her roots. With an overwhelming beauty and personality, it was nevertheless through her great voice that she found her calling. Always aware of her indigenous condition, she decided to investigate her past, meet her biological family and fight to preserve the traditions and rights of the Mapuche community in Argentina.

Painé became the first singer to rescue and spread traditional Mapuche music. She toured the country dressed in traditional Mapuche dress singing stories of her people and denouncing their marginalization. He traveled to the communities natives to learn about songs transmitted from grandmothers to grandchildren and later reinterpreted them in his mother tongue, Mapudungun, while playing traditional instruments such as the trompe, the kultrum and the cascahuillas.

The recognition of her work led her to travel to Europe to participate in Geneva in the Conference on Indigenous Populations of the World, and in London in events of the Mapuche Foreign Committee, although in her native country her great voice always went unnoticed and the record companies never they gave the opportunity to record an album.

She toured the continent with her music, her voice and the traditional clothes that she herself designed, and died very young, at the age of 44, during the recording of a television program in the Paraguayan capital.

Olga Elisa Painé, her real name because Argentine laws prevented the registration of Mapuche terms, was born in the Ingeniero Luis A. Huergo municipality, in the Río Negro province, on August 23, 1943.

Abandoned by her mother when she was only three years old, Painé began a harsh childhood of discrimination in different schools and various shelters. First she stopped at the Hogar Saturnino Enrique Unzué, in the city of Mar del Plata, then the María Auxiliadora school, in the same city and, finally, she was adopted by the upper-class family Llan de Rosos, who provided her with a home and a good education for an indigenous and almost orphan girl who otherwise would never have received them, although she was always very far from her origins.

The lawyer and playwright Héctor Llan de Rosos and his wife, who were seeking to adopt a girl, chose little Olga after hearing her sing. Conscious of her abilities, she dreamed of being a singer since she was a child and studied music with private teachers before attending academies and the conservatory.

Little Olga suffered at school because she was indigenous and did not know who her real parents were, but the music restored her joy and she was even part of the girls’ choir as a soprano. Throughout her life she always said that she waited with great impatience for the Holy Week and Corpus Christi festivities to interpret the Gregorian songs that the nuns had taught her.

It was precisely the Gregorian chants that aroused his interest in his roots. She realized that those tones and songs were very similar to taiel, a Mapuche tune that one of the many grandmothers in her community interpreted in Mapudungun (the Mapuche language).

When he finished school, he wanted to become independent from his adoptive parents and traveled to Buenos Aires. There, to survive, she worked as a hairdresser and also wove and painted pictures as she began to develop her interest in the life and customs of the aborigines of Argentina.

The gateway to his professional career as a solo singer was the National Polyphonic Choir, in which he entered by competition and where he enjoyed five wonderful years as a soprano that he always remembered as a great experience.

During an international choir meeting in Mar del Plata, in which each country had prepared at least one piece of indigenous or traditional folk music, Olga felt the consternation, humiliation and shame of belonging to a country that denied its roots, being Argentina. the only representative who did not wear any traditional pieces.

This situation, which she lived with great pain, led her to make the decision, in 1976, to leave the choir and to travel to the Patagonia to soak up the history and spirituality of their roots through their elders. She then adopted the stage name of Aimé, with which she became known throughout the continent. His name is written the same as “beloved” in French, but it is of Mapuche origin and means “reddish sunset.”

Together with the members of her Mapuche community, Aimé discovered that indigenous music was a true spiritual attraction and unity with nature, and her objective became to make it known in the world and to fight for the claims and rights of the Mapuche community.

In the midst of the Argentine military dictatorship (1970-1983), Aimé Painé began to sing the songs of his ancestors and to recover his cultural values. The young Mapuche woman interpreted the songs explaining the Mapuche culture and using traditional musical instruments, such as the cascahuilla (ribbon or leather with bells used in religious ceremonies), the kultrum (drum made with half a pumpkin) or the kull (cow horn), among others.

Aimé became the first Mapuche singer to rescue and spread the folk music of her people, and she did so wearing the costumes of indigenous women, touring the country visiting other indigenous groups to learn their stories and customs. In his songs he spoke of the relationship of his ancestors with nature and asked for respect for the Mapuche culture, as well as justice and freedom for his contemporaries.

The year 1987 was very good professionally speaking for Aimé Painé, who also participated in the Working Group on Indigenous Populations of the World of the Geneva Conference (Switzerland), and attended cultural events of the Mapuche Foreign Committee in London.

That same year he had a trip to Paraguay on his agenda for various interviews and performances. On September 3, after singing in Mapuche, and while she was being interviewed on Paraguayan television, she fainted and had to be hospitalized. He had suffered a brain hemorrhage from an aneurysm.

She was operated on urgently and overcame the operation, but was left in a coma and was never able to overcome it. She died on September 10, 1987, at the age of 44, and in the presence of her friend Dr. José María Bensadon Carbonell, whom she met in the National Polyphonic Choir, and who traveled from Buenos Aires to accompany her during the surgical intervention. His remains rest in his hometown next to the grave of his father, Segundo Painé, who later passed away.

Many are the cultural centers, schools and libraries that bear the name of Aimé Painé throughout the country. He also has in his honor a street in Puerto Madero and an image of him presides over the Hall of Argentine Women of the Government House.

However, despite their great legacy, the Mapuches continue their struggle for the recognition of their legitimate rights over their territories, for the protection of their traditional customs and for the recovery of their identity as an indigenous people.