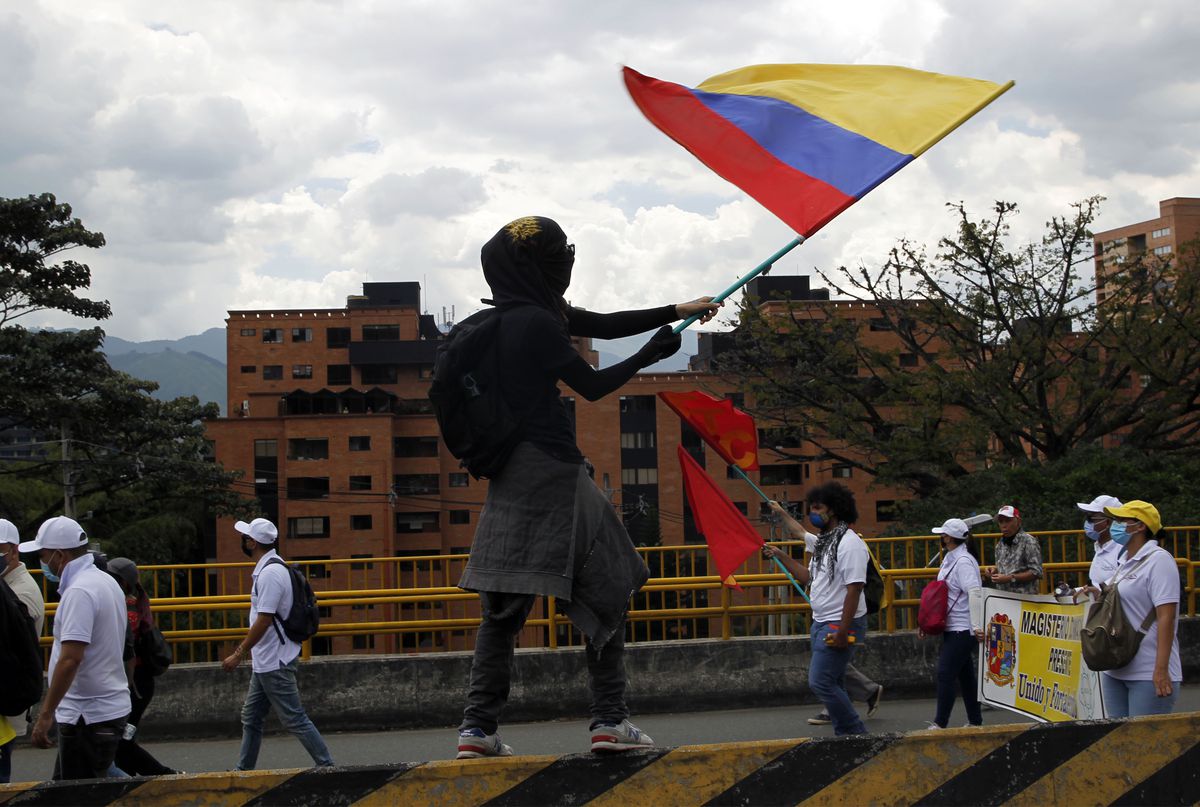 “Alert, our colleague Álvaro Herrera Melo, a student at the Universidad del Valle, is injured and was taken by the police to the La María station. I was in the symphonic cacerolazo ”. A complaint ran at the speed of social networks on the afternoon of May 28 while Cali, in the southwest of Colombia, lived a day of terror that, it was later known, left 14 dead and will be remembered for the presence of armed civilians escorted by the Police. Colombian musicians, writers and human rights organizations were looking for a student who had been playing his French horn in a Cacerolazo Sinfónico, as the way the Colombian musicians have joined the protests that have been going on for more than a month.

Almost at the same time, a video circulated on the networks of politicians from the ruling party, Centro Democrático. The same boy, now handcuffed and shirtless, with blood running down his face and visibly frightened assured a camera that he had been throwing stones and sticks in the wealthy neighborhood of Ciudad Jardin. It is not clear how he reached a councilor from that party, but it quickly went viral.

“And why were you vandalizing the CAI of Ciudad Jardín?” Asks a policeman who records it with his cell phone. Álvaro breathes and says nothing. “Who sent you?” Insists the agent who records it from above. “A group of vandals that we are organized in a …”, says the student without finishing the sentence before the police officer rebukes him: “And why were you doing it?” “Well, because I was in the group, I was with the vandals,” he replies. “And who hit you?” He insists. “The protesters,” says the boy.

The video, which was presented as a trophy for those who criticized the protests, became, at the same time, evidence of a denunciation of an act prohibited by law. No one is obliged to incriminate himself. “They beat his testimony out of him. Over and over they turned the camera off and on and beat him until he said what they wanted. This constitutes inhuman and degrading treatment, it is torture and it is not typical of a democratic state, ”denounced lawyer Sebastián Caballero, from the First Legal Line, a group of jurists who came together to defend the protesters from the strike.

Indeed, a guarantee judge declared that the arrest had been illegal and a day later, both Álvaro and three other students detained in similar circumstances were released. His has become the emblematic image of the arrests. And for the organizations that have documented human rights violations in the protests, it reveals that, in Cali, not only were civilians shooting at protesters, but they also participated in arrests.

“I was afraid for my life”

The music student gets excited when he talks about the symphonic cacerolazo. He does it by phone from Cali and in his voice he does not feel anger with the Police. On the contrary, he recalls that after several hours of being beaten and filmed by agents, “a respectful policeman finally arrived” who gave them food and water. “He became our custodian. Not all police officers are murderers, ”the 25-year-old musician tells EL PAÍS, whose voice also breaks when he talks about his lack of employment. Between his guitar and French horn classes, he has worked as a cleaner in companies and houses. But the pandemic has wiped out those options.

That Friday, Herrera went with his instrument to the Universidad del Valle to participate in the symphonic cacerolazo. They interpreted Stamina, from Calle 13; the National anthem, Nothing for war Y Duque Hello, a variation of Beautiful Hello, as shown in videos in which he appears with his blue shirt, black pants and horn. “Everything was going peacefully. In the distance you could see a smoke and then I knew it was the CAI of Ciudad Jardín that they tried to burn. Shots were heard and the boys from the First Line (a group of young people with shields defending the protesters) came to tell us that we had better finish the concert because there were public order problems ”.

Herrera says he grabbed his instrument and walked south to his house. But he stopped to record the presence of civilians with bulletproof vests who were firing with the Police –for which 10 agents and five civilians are already being investigated-. “One of them sees that I record with my cell phone and it comes over me. I grabbed a stone, I wasn’t going to let them take my instrument from me, ”he says. “But I was careless and one of them appeared on the left side and tried to hang me. After hitting me for a while, he took me to Ciudad Jardín and handed me over to the police ”.

What is seen in a video attests to that story. The musician, shirtless and beaten, is grabbed by the arm by an agent. Someone tells him to put it on and he yells no: that will be a test for human rights. In the background are a man with a rifle and another dressed in white with his face covered. “When I was on my way to the patrol, a civilian said, ‘Let’s put him in the white truck.’ I refused. That’s when an officer who had my left arm said: ‘And why don’t we disappear him? ”, Says the young man.

According to Sebastián Caballero, his lawyer, in addition to the physical violence there was also psychological torture and that is why the musician recorded the video. “I do not regret [de haberse incriminado], I did it for my life, at that moment I feared that I would not live to tell about it. I was thinking of the cases of missing persons who have been unemployed. It was what I had to do at that time, ”says Herrera, who learned that his case was viral when, after several hours in detention, he was taken to the hospital to document his injuries.

The musician says he continues to support the strike. “I am in a safe place and I will continue to participate with symbolic acts, I have nothing to lose, I have no job and fear has been taken from us a long time ago,” he says.