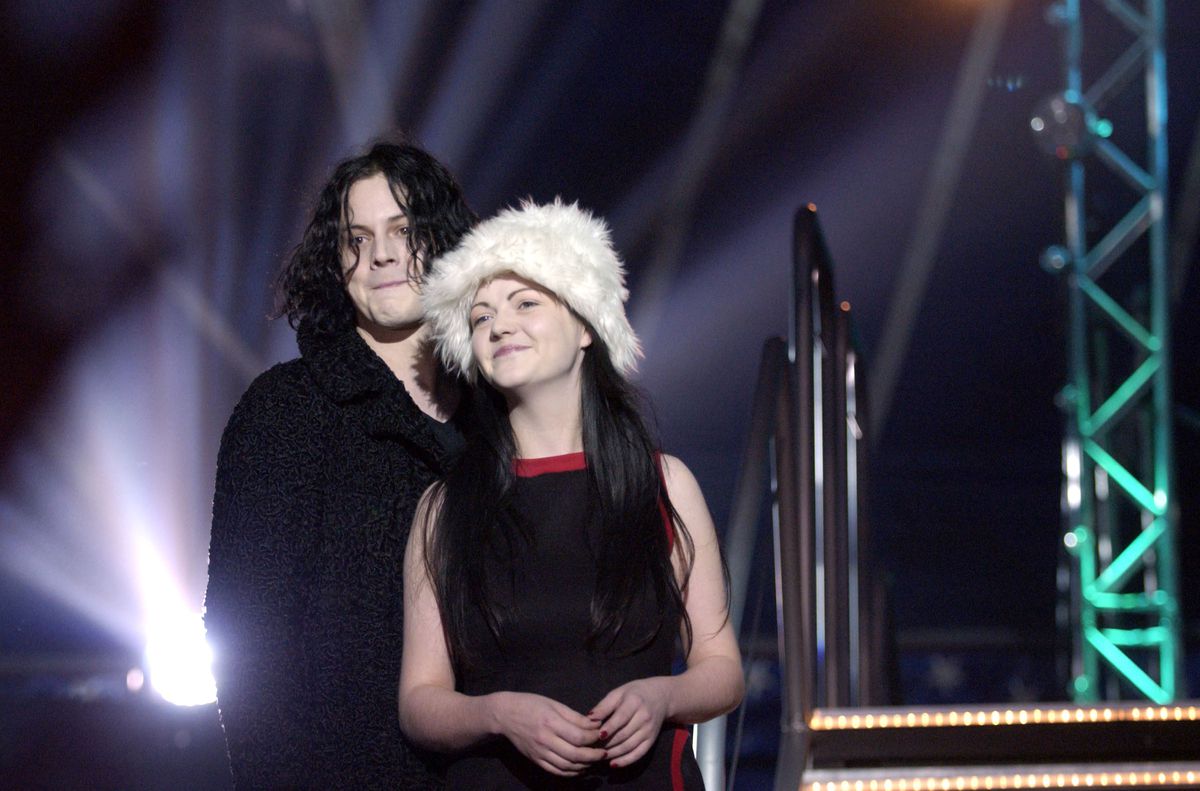 The White Stripes it was the perfect group at the right time. Jack and Meg White were eccentric, imaginative, authentic, and highly influential. They brought rock back into fashion as credible and cool (more even than The Strokes) shortly before the death of rock was decreed again. Everything about them seemed to follow a master plan that worked amazingly for them for 10 years: from July 14, 1997 (the date of their first gig in a little Detroit bar called The Gold Dollar) to July 30, 2007, in Southaven, Mississippi (USA), when Meg, afflicted with acute anxiety, decided that this was going to be her last performance, although the duo kept it a secret.

Perhaps it could have been foreseen in the final sequence of the documentary Under Great White Northern Lights, recorded during his strange Canadian tour that year. After celebrating their 10th anniversary as a band with a majestic concert, Jack sits at the piano with Meg in an empty room. He plays the song White Moon and she starts to cry silently, in his arms. “There was nothing sad at the time, but it was very intense. The two of them had gone through a lot of things that had affected that deep relationship, it doesn’t matter if they were brothers or a marriage, “said the director of the film, Emmet Malloy at the time. Jack resisted letting it end, or at least left the flame of hope burning. For four years, there was hardly any news of the duo until, in February 2011, issued the official dissolution statement.

Meg’s silence added to the myth. Jack White has continued to be very active ever since: he joined the supergroups The Raconteurs and The Dead Weather, produced other artists, led his record label (Third Man Records) and recorded three albums, which will be followed by others. two new jobs in 2022. For April 8, the publication of Fear of the Dawn and, for July 22, Entering Heaven Alive. And 12 days before this last date, he will be performing at the festival Mad Cool from Madrid.

Meg, however, has virtually disappeared from the map. It is known that, in 2009, she married guitarist Jackson Smith (son of Patti Smith and Fred Sonic Smith from MC5) and who divorced in 2013. He is supposed to live in Detroit, but has not returned to making music or giving interviews. In the ones that his ex-bandmate has given, the few clues he has thrown allude to a silence caused by the extreme shyness he has always had, a worrying lack of enthusiasm in the last moments of the band and even the theory of that the constant criticism poured into her drumming has demoralized her and alienated her from music forever. In no case has he hinted that there is a deal between the two and, although taller towers have fallen, a meeting does not seem likely.

All of this can be true or false

The official story of The White Stripes has been an exercise in fantasy or, if we get surly, a big lie not too well elaborated. It was in the latter that much of his charm lay. In their own way, The White Stripes invented the posverdad in the promotional discourse of rock: whether what they said was true or not was of little importance. What they wanted to be credible was the myth that they themselves had generated, like the biographies of the old men. bluesmen of the Mississippi delta or that Fordian idea that, between truth and legend, you must always print the legend.

It began 25 years ago in the American city of Detroit. A young man named John Gillis, the youngest of 10 siblings from a Catholic family, who had been an altar boy in his childhood, plays with little luck among rock groups from garage of the local scene. At the same time, he opens an upholstery store called Third Man where he says that he is obsessed with black and yellow (which will later be omnipresent in his label-office-shop-factory-recording studio baptized with the same name). Jack is only 21 at the time, but he marries his longtime girlfriend, Megan White, and contrary to tradition, he is the one who changes his last name. A year later, when they offer their first concert as The White Stripes, they introduce themselves as brother and sister and, despite being a seedy joint, they make up the stage with some fabrics and are already dressed in the colors they will always wear: white, red and black, inspired by the minimalist art of Piet Mondrian and the De Stijl school. It is said that Meg had never played drums before, but that, at home, Jack one day picked up the guitar, invited her to play some primitive percussion, and the magic happened.

All the identifying elements of the group were already present on their first album, The White Stripes, published in 1999. A year later, shortly before publishing The style, Jack and Meg were getting divorced. Apparently, he wanted to end the group as well, but she encouraged him to continue. And, with the marriage broken, that was when the musical duo began to take over the planet. White Blood Cells began to make them fashionable in 2001. And, when they published ElephantBy 2003, it was already the group that everyone was talking about.

To their introduction as siblings, their use of primary colors, and their fascination with a certain mystique of the number 3, The White Stripes added quite a few milestones in music marketing. At first they wanted to do an art project, with staging punk-rock, the simplicity of the blues and a point like cartoon. Jack often affirms that he did not sing, but that he vocalized characters, and was also very inspired by the world of children. “The point of view of children is purer, clearer than that of adults. We get a lot of ideas from there. In fact, when a child likes a song of mine, that’s when I know it’s good, “he told this same journalist in 2003.

On the other hand, it is now easy, almost recurring, to see guitar and drums formations (some of as successful as The Black Keys) or even bass and drums (Royal Blood), but at the end of the nineties, that was a real frikada. It never crossed their minds to incorporate a third component, nor did they use non-analog equipment. So much so that even in the elaboration of Elephant, they boasted of not using any device manufactured after 1963. In addition, the promotional discs that they distributed to the press were only made of vinyl, before it became fashionable again. In their own way, they also invented a new form of retrofuturism: they knew how to vindicate the most ancient of rock and blues by being insultingly modern, recording revolutionary video clips with Michel Gondry, interpreting themselves in The Simpson and in the movie Coffee And Cigarettesby Jim Jarmusch. Even without intending to, they passed into popular culture as authors of the most chanted “lololololo” in sports competitions and bachelor parties.

According to Mark Kitcatt, director of his distributor in Spain, Everlasting, Jack White is “an intelligent and insightful man” with whom, above all, he talked about business. “It is unusual for an artist to pay so much attention to how each territory works and understand so much about the process of preparing their art for the market, making it work. Jack was interested in everything, including things that 99% of artists tend to leave their managers”.

The White Stripes also escaped the conventions of the direct. They say they never carried a fixed repertoire. Normally, Jack began to outline a theme, Meg followed him and between them they twisted it, altering it live. The interaction – instrumental and visual – between the two was vibrant. And its presentation, faithful to the group’s principles: even the “pipes” were dressed in the brand’s colors and a black bowler hat.

Another distinctive were the words that the vocalist always released to the public: “My sister thanks you and I thank you.” They curled the curl on what ended up being their last tour. Due to an apparent family connection to Nova Scotia, Jack came up with a tour by all the provinces of Canada. They included concerts in places as unusual as a nursing home and performed the show shortest ever: a second in which they played a note.

Jack White, in addition to being an undisputed icon of modern rock, as a guru, businessman, producer and musician, often appears repeatedly on the lists of the best guitarists of all time. But the same cannot be said for Meg, who was frequently criticized for her lack of technical expertise. “With a more typical rock drummer, more stump, they would have had a much more standard sound, more similar to that of so many other bands, but those rudimentary rhythms are a fundamental part of the group’s character and its minimalist sound “, says Elisa Pérez, who currently records electronic pop like Caliza but, previously , was a percussionist in the groups indies Cosmen Adelaide and White Russians.

“I also like his attitude. Her face of indifference when playing conveyed a lot of security, and it must be added that the fact that there was no bass player placed an even greater responsibility on her ”, adds this 32-year-old from Madrid, who also quotes Moe Tucker (The Velvet Underground), Georgia Hubley (I Have It) and Mimi Parker (Low) as influences, although she went to the White Stripe Who he saw first, “on TV, at some MTV awards or something like that, in 2003 or 2004. Seeing Meg White play it really impressed me. I don’t think I’ve ever seen a woman play drums before. ” That encouraged her to do the same. “I started teaching and got my parents to buy me an electronic drum kit. Shortly after I formed a group with a couple of friends and the first thing we did was Seven Nation Army“, remember.

The Malaga-born Isabel Guerrero, music journalist and drummer in the Esplendor duo, also considers the visibility of female instrumentalists as a very important factor for other girls to want to support them, and adds that The White Stripes “created more school than many minimalist bands from rock and roll classical recognizes, and only because they were successful ”. About the sanbenito that his drums played badly, he says he doesn’t understand it. “Hadn’t we been, since punk, where virtuosity sucked? I think that, in 2021, much less prejudiced, this issue would not even arise and the magnifying glass on Meg would be different, perhaps even non-existent ”. “It takes a lot of courage to expose yourself like this when you receive so many negative comments, and I think that, as a woman, she was subjected to greater scrutiny,” concludes Elisa Pérez. “Now it might have been better received, but it is also possible that it would not have stood out as much, both for better and for worse.”

A great success, a disappearance: what happened to the White Stripes 15 years after their last concert