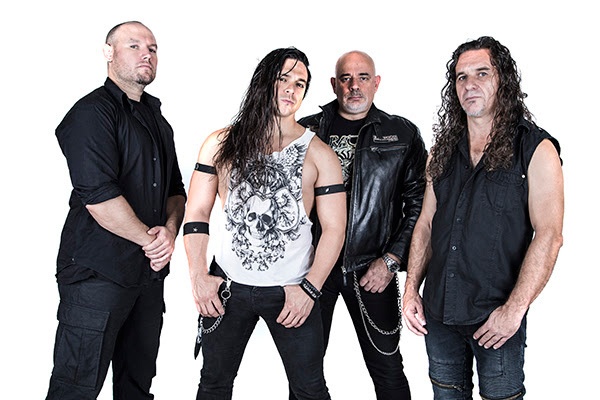 Saratoga is a Spanish heavy metal band that has been growing by leaps and bounds. The project celebrates 30 years of life and reaches the top of tour dates, a new album and even the recording of a live DVD. In the prelude to his visit to the Flying Circus of Mexico City we were able to talk with Tete Novoasinger of the group.

Without a doubt, Saratoga’s growth is palpable and, far from detracting, it is becoming more and more evident. What is the formula behind this success?

I believe that a band always has to evolve, but it is also true that this time it has been in a special way. We have been stuck with a pandemic for two years, so this tsunami of wanting to get out and a lot of things have come together to make this tour monumental with a new album and celebrating the 30th anniversary. Leaving this stage and seeing that people are hungry for concerts and shows, I think it is a shake for a tour to be a success and that is being reflected in the public and the band.

We know that you are constantly creating material and that now you have the release of the DVD ahead, new music, many dates ahead. How do you find the balance in moments like this to give some space to your personal life, rest, etc.?

Actually, the strange thing is just the opposite: having been unemployed for two years because of what has happened in the world. We are used to walking day after day and what was strange is being at home or going to give a small show with people wearing masks: that was really difficult. What we like are touring and this summer has been brutal. We have a lot of dates ahead of us and we have recorded a live album. The life of a professional musician is like that and after the pause that actually occurred, the only thing we hope is to continue like this.

Saratoga has acquired a special communion with Mexico and has gone from playing in very intimate spaces to appearing in larger forums and with many cities interested in seeing them. Describe your perception about the birth, growth and future of this fruitful relationship.

For us it is super interesting to reach countries like Mexico, we have very good friends there. I remember the first time we played there and we had that great culture shock with the Mexicans that makes you fall in love from the first moment and it’s very beautiful, especially when year after year as a band you see how you are presenting yourself on bigger stages each time and now for several cities there in Mexico. The truth is that it is a dream but also the result of a lot of work behind it and that has allowed us to constantly visit your country to bring our music.

One of the things that caused some reluctance among the Mexican fans was Jero’s absence from the tour, already justified in a statement due to labor issues. The place will be taken by Charlie Parra. Can you tell us a little about him and how you decided he would be the best choice in this provisional replacement?

Jero has his personal reasons that he has already explained on both his own and Saratoga networks and has stood up for the fans who have asked about him and well, we must respect the personal life of each one beyond the band; The most important thing is that the fans want to see Saratoga. It makes me very angry, of course, that Jero is not accompanying us on this tour, but we had to find drastic solutions that work and well, we found Charlie who is a machine: he is an explosive mix that is going to contribute a lot to the lineup and as a fan I have I really want to meet him because I haven’t had the pleasure yet and I want us to crash heads together on stage. We want him to be nourished and enjoy the music of Saratoga.

With so many days in Mexico, what would you like to know or try that you have heard about our country, but have not had the opportunity on previous visits?

Well, Mexico is an incredible country. Yes, I have been lucky to be on one of the tours to do a bit of tourism in the very short time that we have free because the shows do not give us anything and the little free time we use to rest and sleep before the next show or even just ride the road. I had the opportunity to be in Teotihuacan, which really amazed me and I was able to see the ruins. I was also able to visit some cenotes there in Mérida, which really fascinated me and well, on this tour we will try to escape and find that little hole to try to enjoy more of Mexican culture and learn more about its culture and its people.

Thirty years is a lifetime, practically the average age of many of his fans. When the project started, did you expect to be in the arena for so many years (and those that are still to come)?

Well, I think that when you’re in music and not only in music, it can be in a sentimental situation, for example; many times you do not know how long it will last: it can be a lifetime or a few days. But what I do know is that you have to work day by day with enthusiasm and commitment and if that is constantly consolidated, this generates a continuity that allows you to reach certain directions, and in the case of my colleagues Nico and Jero, they’ve been here for 30 years and I’ve been here for 15 years, they’ve gone by very quickly, but you look back and see all the records, tours and concerts we’ve done and you say damn: what a lot of things we’ve lived through and how many things we’ve worked on to be where we are right now.

Well, nothing carnal Mexicans, we are nothing away from taking the plane and starting the tour there. I think we haven’t been there for more than three years and I really want to see them. A lot of anecdotes and stories that we have experienced there and this tour is going to be incredible. I will miss our manager and our promoter from there in Mexico very much. Our partner Adán Moreno who left us because of this bloody COVID, but we will remember him at each concert and well, nothing. We are ready to enjoy!

“A band always has to evolve”: Tete Novoa, Saratoga