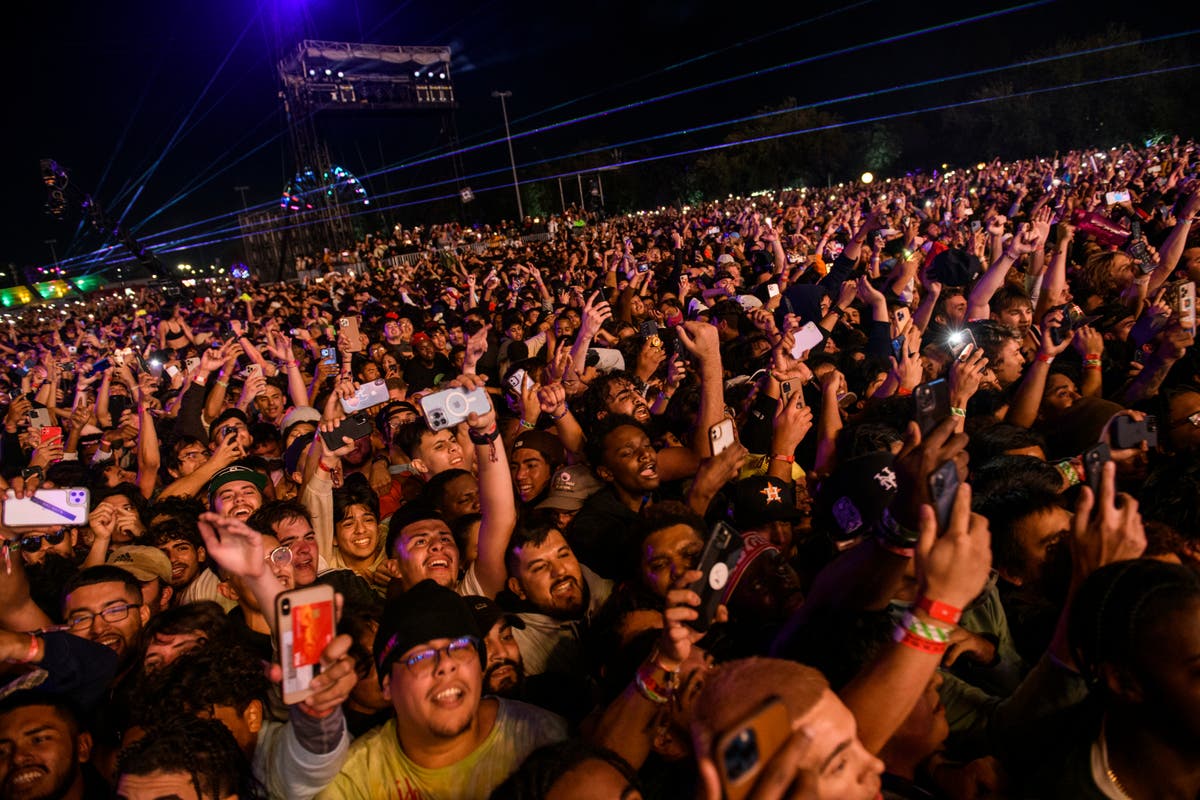 The anticipation had built for hours, but never like the moment when a countdown in red disappeared and the first notes of the synths vibrated. The image of an eagle in a fireball rose above the stage. A neon tunnel appeared and eight columns of flames rose to the sky. Coming out of the darkness and into the light, rapper Travis Scott emerged. That was the instant that tens of thousands gathered there had waited.

In the excitement of the moment, clamoring for their idol, many pushed forward, pressing people against people, closer and closer and closer, until it seemed that there was not an inch free. So, to fight compression, or seeking to escape, people began to push from the front to the back, and new blows came with it.

What happened next last Friday in Houston is clouded with unanswered questions and quite different experiences based on where someone was standing, what waves of motion hit them and how they handled the crush. But after the 70 minutes that the main artist was on stage, the show ended with nine people dead, so far, and one thing is for sure: Almost everyone felt those waves of humanity, born of emotion but full of risk as they they expanded.

“You became an organism,” said Steven Gutierrez, 26, of Ellenville, New York, who measures 1.87 and weighs 177 kilos and yet was overwhelmed by the power of the shoves that sent him from one place to another. . “We were all one, moving with the crowd. The crowd is like water, like an ocean ”.

The enthusiasm of some 50,000 spectators at the sold-out Astroworld festival was evident from the moment the doors opened seven hours earlier, when some of the first to arrive rushed through the entrances with such force that metal detectors they were shot down while security guards and mounted police struggled to maintain order. Although the festival had numerous acts, Scott, a musician originally from Houston, who founded the festival in 2018 following the release of his popular album “Astroworld,” was without a doubt the artist everyone wanted to see. Some fans lined up for the stage built exclusively for Scott, setting aside spots for hours under the peaks of “Utopia Mountain” scenery.

As the afternoon turned to night and the countdown clock appeared around 8:30 p.m., the crowd became denser and denser, according to people in attendance, and the first waves of movement began. to feel.

Five minutes after starting and with the arrival of last minute people, it was more compact.

In the last 30 seconds on the clock the mountain peaks on stage turned into a volcano and when the moment came the crowd began to shout: “Ten, nine, eight, seven! …”

Scott appeared and the shoving got stronger and then the waves of fear began as well.

Eligio Garcia, 18, a native of Corpus Christi, Texas, said about 40 seconds into the concert when he looked at his girlfriend with concern. They felt a heat that enveloped their bodies and it became difficult to breathe.

In the distance echoes of shouts could be heard: “Please help me!” Behind him people were falling, it looked like a human whirlpool. They felt the shoving and his girlfriend detached from his left arm.

In an instant the two were stuck on the floor in a pile of bodies.

They managed to get up, and Garcia said they yelled for help from production staff they saw nearby, but had no response. Any way out seemed impossible, but they eventually made it to safety.

“We have to get out of here,” he told his girlfriend. “We cannot fall back into that slam circle.”

Scott’s fans have the nickname “ragers” (enraged) and are expected to be constantly on the move at a concert. The rapper, who dreamed of being a wrestler as a child, said he wanted his concerts to look like WWF wrestling league matches. He often incites chaos from the stage and stirs up frenzied energy. It even has a gold chain that looks like a street sign: A jewel-encrusted red circle with a person standing crossed by a red diagonal line that seems to say: No passive observers at concerts. Just “ragers”.

And the show went on, with Scott headbanging and yelling in rapid succession to his hits.

Some seasoned concert goers picked up whistles they wore on their necks or yelled “Open up!” to make holes for the slam (also known in English as mosh pits), circles that were small voids in the crowd. As is often the case at concerts, people slamming aggressively shoved each other. On the perimeter of the circles the participants rotated and the people in the crowd ended up fighting.

People who slam want their circles to be as big as possible. His outward thrusts were combined with the rotation of the participants. This was nothing new to many at the concert. But combined with the jostling onto the stage, others felt the crowd compress like never before.

Billy Nasser, 24, of Indianapolis, noticed when few songs had passed. His arms were raised and he had no room to lower them. People were falling. Some trampled on the inanimate body of an unconscious man with blank eyes.

“I had to leave him … he was on his own,” Nasser said. “And then I realized how bad it was because I literally had to drop it and no one else helped me.”

In some places red flags began to appear, but the concert did not stop. Lasers coming out of the stage tunnel made it look like a prism capturing a bright sun.

Some 503 Houston police officers were at the scene and a warning was heard on their radios: Do not separate from your groups, no less than 10 police officers together. There is danger.

“We are having structural problems that can be catastrophic,” warned a voice.

At 22 minutes into the concert Scott seemed to see something in the audience.

At the same time, on the police radio, a voice advised: “People are leaving the crowd complaining of breathing difficulties, crush-type injuries. It seems like the crowd is compressing. “

The mass of people continued to crowd at some points, but there were still some escape routes.

Kevin Perez, 19, of Davenport, Florida, watched a slam circle collapse behind him and realized he was no longer in control of his movement. His forearms were glued to his chest, his hands clenched into fists near his neck. He looked up at the sky so he could breathe a little.

“I went from being excited to being scared,” he said. “People were trying to get out.”

Perez began to follow a line of people who were making their way through the audience. Others scaled the barricades.

Before the things that lived in the night, some details acquired new meanings. The first song was “Escape Plan”, T-shirts that said “I see you from the other side”, a man with a sign that said “We are going to survive”.

The situation seemed to be getting worse. The waves were getting stronger, and the opportunities to get out less and less.

28 minutes into Scott’s set, a golf cart with red and blue lights barely made its way into the sea.

“There is an ambulance in the public,” said the rapper. “Wow”.

Scott paused for about a minute and asked the audience to raise their arms to the sky. “You all know what you came for,” he said. It was a signal for two men who were chosen from the audience to jump off the stage into the crowd.

Scott finished “Upper Echelon” by reaching 30 minutes on stage. Houston Police Chief Troy Finner later said that this was the moment his department noticed people in the public “falling.”

In the medical tent, where the capacity was for just 10 people, according to the permit files, concern was mounting. On the police radio, it was said: “There are many people trapped and they are losing consciousness.”

On the perimeter of the concert area, people were being pushed towards metal barricades, some began to bend.

In the next song a young woman was videotaped climbing onto a platform with a cameraman.

But the show went on.

It is unclear what the rapper could see. He had a vantage point from a raised platform in the center of the stage and said at one point that he could see “all the way back.” But looking towards the viewers, thousands of shiny cell phones look like a sea of ​​stars. His attorneys said in a letter that he did not learn of the deaths or those injured until after the concert.

As Scott chanted from the platform, the security guards attended to the people in the crowd: “He has no pulse” and “There are four people here without a pulse.” Police said the festival promoting company Live Nation agreed to halt the festival at this time. But inexplicably the show continued.

Forty minutes had passed since Scott took the stage and again stopped for a moment.

“We need help. Someone was knocked unconscious in front here, ”he said.

Scott continued working shortly after, singing lyrics that speak of being “standing in the ocean.” Before the artist the true sea of ​​humanity was full of problems. The panic spread.

We’re going to get trapped! Michael Suarez told himself, fighting not to fall.

I’m going to die here! Stacey Sarmiento thought as she tried to escape.

A woman had to bite a man to break through. One man said that people became like animals as the situation worsened.

For some it could not be worse, but another wave was coming. 52 minutes into Scott’s concert, famous rapper Drake appeared on stage, a surprise that caused the crowd to jostle again.

Gutierrez, a muscular former lifeguard, had returned to the public after briefly retiring and guiding two people to safety. Now he was back among them, overwhelmed by the joy of seeing Drake.

“You felt the rush to the stage, there was a great push,” he said. “The Drake Effect.”

Scott and Drake shared the stage for 14 minutes until Scott was left alone again for the last song as the mountain behind him lit up with colors and fireworks went off.

“Come home safely!” He yelled before running off the stage.

The ocean of people descended, leaving the floor littered with shoes, clothes and trash. A hospital was filled with wounded and the news of the tragedy began to spread among the people.