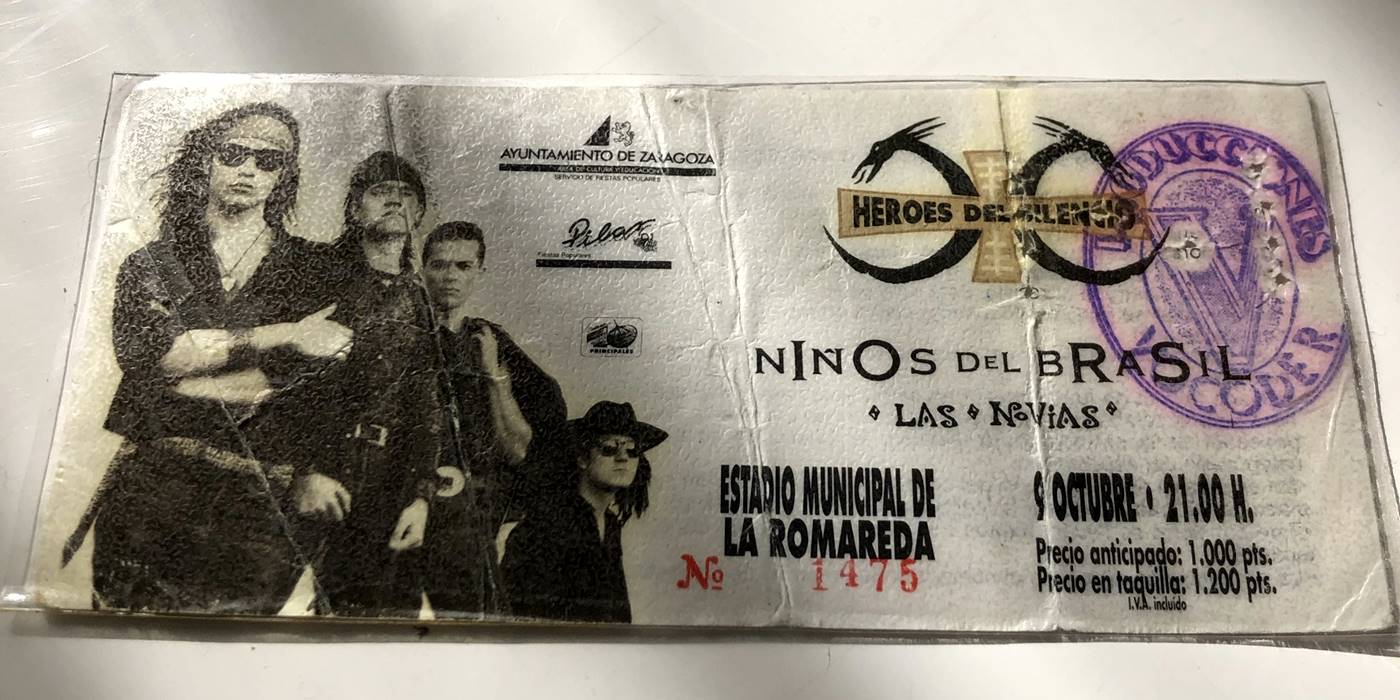 We pass you on the mythical concert that in 1991 from the La Romareda stadium brought together Héroes del Silencio, Niños del Brasil and Las Novias.

These ‘No parties’ of Pillar 21 are not only those of the pandemic. They also represent the 30th anniversary of the mythical concert of Héroes del Silencio, Niños del Brasil and Las Novias.. From Aragón Musical we celebrate it through this publication with audio included. It was in Los Pilares in 1991 when the aforementioned bands, in the mouth of a great majority of young people from Zaragoza of the time, joined their live shows. And nothing less than in an entire stadium of La Romareda in Zaragoza. Below these lines you can listen to the audio resulting from that show.

On October 9, 30 years ago, almost 20,000 people attended a historic concert. A poster that would never be repeated. In the heat of Héroes del Silencio fever, those Fiestas del Pilar programmed the band of Enrique Bunbury, Juan Valdivia, Joaquín Cardiel and Pedro Andreu. Above they did it together with two formations from Zaragoza with a multitude of fans in common with them. Niños del Brasil and Las Novias were much more than two cherries on the cake. The younger audience that we attended then, we have already exceeded 40, and that day we remember every year with greater affection.

The three groups yesterday and today

Heroes of silence they had edited ‘Trails of Betrayal’ a year ago and they were about to perform their first great concert in Germany within the ‘Rock Against Racism’. It was a macro-concert against racism thanks to which the German public would begin to notice them. Three decades later, the band is totally topical with a documentary released on Netflix, a biography published last spring and different reissues that occupy the top sales positions. Many people are still hopeful about another possible meeting.

In that same 91 Children of Brazil published their emblematic ‘Messages to the Wind’. Years before, Enrique Bunbury had been part of the initial project of Santi Rex, Nacho Serrano and Antonio Estación. There are those who believe that the image of Bunbury in the early days of Heroes had a clear inspiration from the style of Rex. The two formations also shared the battery Pedro Andreu. Today, children, although with a dropper, continue to play, as they did this same summer from the recovered Winter Garden of Zaragoza. Even have toured Mexico on several occasions. In 2018 they published their definitive audiovisual compilation.

The beginning of the 90s was also very positive for Las Novias. At the same time they signed a contract with the multinational label Polygram with which they would publish ‘Sueños en Blanco y Negro’, his debut after numerous demos that we pirated then from cassette to cassette. Enrique Bunbury produced that first album. Thirty years later, Las Novias are in their prime. In full compositional and interpretive form, they have received several Aragonese Music Awards. They have released highly rated albums, one of them live, and They are recording a new album for which there are high expectations.

A match like the one at La Romareda stadium would never be repeated, leaving that experience as a unique event. Those of us who live it feel that way. To this day, this concert is still being talked about as one of those that encouraged many young Aragonese people to value our bands, take an interest in musical Aragon and even set up a group.

In the middle of the route between the concert and today, one day before the 15th anniversary of that afternoon, Heroes announced their only reunion, which would lead to the 2007 tour. Today this band is totally topical and who knows the next news it may offer.

In 2015, from Aragón Musical, we tried to honor that concert. It was not possible for Las Novias to play but in the Plaza del Pilar in Zaragoza, to close the festivities, we programmed Niños del Brasil, Silencio de los Héroes (a tribute band to Héroes del Silencio) and The Bronson. It was within our usual ‘Impossible Concerts (or almost)’. Today we have tried again through these lines and the audio that you can enjoy under them.

More info: Heroes of Silence, Children of Brazil and The brides