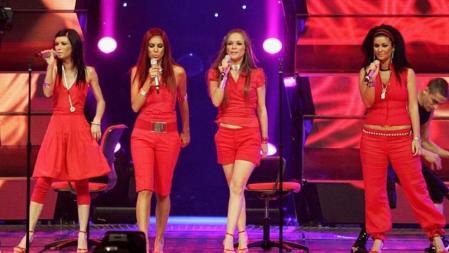 20, 21 and 23 years old are the ages at which the lives of Pilar, Lola and Lucía Muñoz changed, three sisters from Córdoba already familiar with the music industry as the daughters of a flamenco guitarist. The little girl, Pilar, wanted to be an actress, Lola was finishing her degree in Labor Sciences and Lucía was a hairdresser. In August 2002, they released their first album daughters of the tomato baptized as Las Ketchup, a direct reference to her father’s stage name, Juanma el Tomate. Despite being a debut album, the main theme aserejé It had been playing for months in discos, concert halls, bars and radios; the name of the sisters was already etched in the music charts and above all, in the hearts of millions of people around the world. So much so, that the song was number one in more than 20 countries, sold 7 million copies and quickly ranked 103rd among the best-selling singles in music history, above Hit me baby one more time of Britney Spears, of the mythical Wherever, Whenever of Shakira or of wannabe of the Spice Girls.

aserejéwith sandunguero rhythms and dance steps similar to those of The Macarena, has a somewhat peculiar chorus. “And aserejé-ja-dejé, de jebe tu de jebere seibiunouva majavi an de bugui an de güididípi”. A unique melody that few sing correctly. Since the single came out, theories about the meaning of this incomprehensible saying have multiplied, even circulating a rumor that associated it with demonic chants in honor of Satan himself. Actually, the lyrics are nothing further from reality. It is about a young man, Diego, who decides to go to a disco one night, slightly drunk and having consumed some kind of drug: “Diego comes partying, with the moon in his eyes and his seawater suit, contraband remains” . Diego is friends with the DJ at the disco, so he decides to ask him to play his favorite song, Rapper’s Delight of the American hip-hop trio The Sugarhill Gang, who appeared in 1979.

Diego, who doesn’t speak English and who has also had a few too many drinks, can’t sing the lyrics correctly and distorts the melody. The result is Asereje’s famous refrain. Thus, Rapper’s Delight says, in English: “I said-a hip, hop, the hippie, the hippie to the hip hip hop-a you don’t stop the rock, it to the bang-bang boogie, say up jump the boogie, to the rhythm of the boogie, the beat”. If it is sung quickly and poorly, the result is close to the theme of Las Ketchup. “It seemed strange to us, really, and we thought that the chorus was impossible to sing, but the same day it went ahead”, explained one of the sisters in an interview with EFE.

Who says success says money. Las Ketchup’s record sales exploded during the summer of 2002, sparking a lawsuit between record label Shaketown Music, producer of aserejé and the multinational Sony, responsible for the distribution of the single. Shaketown sued Sony for breach of contract, claiming that they had only received payments for 200,000 of the 7 million copies sold. The track on what was the result of the complaint has been lost.

aserejé radically changed -but momentarily- the lives of the three sisters, whose decline in popularity occurred after their performance in the 2006 Eurovision Song Contest, which occupied a modest 21st place with the song a bloody mary. A short but intense race. “The only promotion that was made, which was not promotion, was sending us to Eurovision,” Lucía protested in an interview with La Sexta, calling the drop in popularity of the group unfair.

To this day, Las Ketchup continue to make stellar appearances as guests on sets around the world. In 2021, they performed for Polish television during the migration crisis on the border with Belarus for, as reported by the news portal Notes from Poland: “Encourage the Polish troops in these difficult times.” A controversial concert that soon aroused strong criticism on Twitter, who claimed that it was not the best time to sing a song like aserejétoo partying and moved.