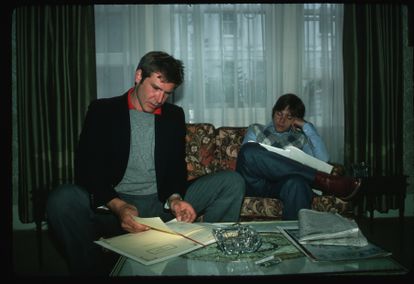 “Why Star Wars did not make Mark Hamill (California, 70 years old) a giant star? Why did he work so little in the cinema in the eighties and nineties? I know I ask a few years ago a user in the social network of questions and answers Quora. The answer came through someone who knew Hamill well, the actor William Salyers. “I worked with Mark on Cartoon Network. He is a successful actor, he has exceptional talent and a long career, he has played all kinds of roles. He owns a nice house in Malibu and has raised a lovely family. He is down to earth and kind, intelligent and eloquent. The fact that he has not become Bruce Willis or Tom Hanks should not be interpreted as a lack of success at all. Any actor would be very lucky to have Mark’s career.”

Salyers’s answer makes us wonder what it really is to be a star and what can be considered to have a successful career. If it is to achieve a lifetime position in the collective imagination, star in films that have broken the box office, collect a millionaire salary (he received almost three million euros for appearing 70 seconds in Star Wars: The Force Awakens) and enjoying the unconditional love of hundreds of thousands of fans across generations, it’s clear that Mark Hamill is a star with a successful career.

But analyzing some of their decisions and seeing the success and recognition they achieved Carrie Fisher and especially Harrison Ford, it is inevitable to have the feeling that Hamill has not come too far and is not perceived by the public as a true star, it has been by choice. Even knowing that this month opens Go fish. Let’s save the sea! and leads the distribution of The fall of the House of Usherthe new series that mike flanagan is filming for Netflix and will be released this year.

When he arrived at the galactic saga, Hamill had already been in front of the cameras for more than a decade. He is the fourth of eight children from a middle-class family who had spent half their lives accompanying his father, a captain in the US Navy, around the world. After debuting at the age of twelve on the popular American soap opera General Hospital had gone through many of the great successes of the time such as The Bill Cosby Show.

About to turn 25 and while waiting for the CBS network to give the green light to the pilot he had recorded (eight is enough), Hamill participated – like half of the young actors in Hollywood at the time – in the casting tests for Star Wars (1977), by George Lucas. Young Lucas had just had a big hit with the generational sitcom American Graffiti (1973) and was intrigued by the modern, naive look of Mark Hamill, who considered able of “bringing humanity to a movie full of space vehicles and special effects.” The Serie eight is enough It premiered successfully and remained on the screen for four years, but without him: then the role of Luke Skywalker was already his.

On the night of January 11, 1977, four months before the premiere of Star Wars, was about to say goodbye to his career and his life. He skipped the exit while driving his BMW through Los Angeles, and to fix it, he tried to cross all four lanes of the freeway. “It was in a secluded spot and there were no cars or traffic, thank God. I was going about 110 kilometers per hour, too fast, I lost control and went off the road. The next thing he remembers is waking up in a hospital room. “When they put a mirror in front of my face I felt that my career was over.” He had broken his cheek and doctors had used cartilage from his ear to repair his shattered nose. The results left noticeable scars on his facial structure. His nose had shortened and his expression was harder. Lucas used a double to shoot the few remaining sequences and the evident changes in the actor’s face were justified thanks to a change in the script that included an animal attack at the beginning of The Empire Strikes Back, in 1980.

Hamill was totally committed to the George Lucas film, but he wasn’t sure it would attract a mass audience after its release in 1977. He thought it would become more of a cult movie. No one, not even Lucas, could have imagined that it would become one of the cultural phenomena of the 20th century.

The public blessed it en masse, but critics were divided on its quality. In which there was no discussion is that the performances were not the most brilliant of the film. This hurt Hamill, who felt that he should show his talent beyond the galactic universe. “I think that many of those who had seen me on television knew that I am not Laurence Olivier, far from it, but I have a certain versatility and more than one register”, he would declare about it.

The accident did not have a negative impact on his career, at least not as much as his determination to get rid of the character that had made him an idol. To get away from Skywalker he embarked on smaller productions like the teen comedy summer runs (1978), his first work after the first part of the trilogy, “a film about people where I could show a little more than I can do as an actor.”

In his eagerness to show the public that he was a true actor, he gave up film roles to succeed on Broadway. In the early eighties he was, on stage, the John Merrick of The elephant Man and the Mozart of Amadeus. When in 1984 Milos Forman made the film adaptation that would end up winning eight Oscars, he aspired to get a role that he knew very well, but the producer was clear: “I don’t want Luke Skywalker in this movie.” Everything gave him arguments to get away from the character that he had pigeonholed him. “I had a role that shocked people so much that I felt I had to break it.” And he got it.

Shortly after premiering in 1983 return of the jedi he was already considered a second-rate actor, another broken toy. Meanwhile, Harrison Ford was establishing himself as one of the most profitable stars in the film industry and Carrie Fisher was forging a successful career as a writer and screenwriter. The actress, a great friend whom Hamill still mourns and pays tribute to on her social networks, did not understand her emphasis on running away from her galactic legacy. “One day she called me to scold me”, Hamill recalled in New York Times. ‘What is your problem?’ he told me. I replied: ‘Well, I want to focus more on theater.’ And she answered me: ‘I am Princess Leia. You are Luke Skywalker. Get used to it.”

Although he has not returned to head relevant film projects, his working life is that of a Stakhanovite. He accumulates dozens of credits, especially related to his role as voice actor. Something that is not a consequence of his accident as many think, nor a kind of golden retirement, but a true vocation. “I remember watching a Walt Disney special on animation when Clarence Nash came on as the voice of Donald Duck. He must have been five or six years old and a lightbulb went off in my head. Suddenly it occurred to me that someone gets up in the morning, goes to work, and his job is to be the voice of Donald Duck. I want that job!” confessed to NPR. He has had it in spades: the dubbing of animated characters has become the backbone of his acting life and has allowed him to move away from the role that marked his career, at least until the middle of the last decade, when the least expected happened. .

After half his life trying to detach himself from the role that had made him an icon, he received a surprising call. A new trilogy was going to be developed and the original characters would be in it if Fisher, Ford and Hamill wanted to play them. “I was left in check”, declared to New York Times. “Within a minute, Carrie slammed the table and yelled, ‘I do!’ I told her: ‘Carrie, how saved you had it! He needed more time to think. He feared they would be rejected as old. “Nobody wants to see our fifty, sixty or seventy year old versions running around and tripping on the Death Star. It’s sad,” he declared. He was so sure that Ford would not return that he made his presence a condition.

“He is too old, rich and grumpy. He won’t.” But when Ford agreed, Hamill realized he should too: “Can you imagine if I was the only one who didn’t agree? He would be the most hated man in the world nerd”.

His doubts were logical. The quintessential galactic hero was no longer the beardless young man wielding a lightsaber for the first time. Hamill was over sixty and had a full life in which he had also developed his career as a comic book writer and a happy marriage to Marilou York, a dental hygienist whom he married shortly after the release of Star Wars. He no longer had anything to prove in his career.

The new trilogy brought him into contact with an enemy more insidious than Senator Palpatine: the fandom most toxic in the galaxy. For years, Hamill has behaved like a true Jedi and has taken a position against the misogynistic and racist attacks against actresses Daisy Ridley and Kelly Marie Tran Y proudly supported John Boyega during the Black Live Matters demonstrations. Hamill uses social media as adeptly as a lightsaber, frequently using his five million Twitter followers to support social causes and lambast Donald Trump, whose Twitter messages he often read using the voice in which he spoke. voices Joker in the animated series.

He has also used the networks to make visible and denounce the absence of LGTBIQ characters in the three trilogies. “Now the fans write to me and ask all these questions: ‘I get bullying at school… I’m afraid to come out of the closet”, confessed in Vanity Fair. “They ask me if Luke could be gay. I tell them it is what the viewer wants it to be. If you think Luke is gay, of course he is. There is no shame in it. Judge Luke for who he is, not who he loves.” As her friend Carrie Fisher told him, whether he likes it or not, he will always be the heroic paladin Luke Skywalker. And it seems that, decades later, he has finally gotten used to it.

“You are Luke Skywalker, get used to it”: why it has taken Mark Hamill four decades to accept his great role