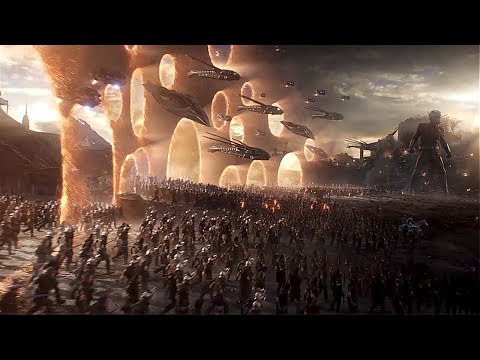 Black Panther is the first superhero to reappear in the mythical scene of the mystical portals during the final battle of Avengers: Endgame. Not only is it considered one of the most important moments in the entire journey of the Marvel Cinematic Universe, it also demonstrates the great potential of a story shared between several films.

It was such an important scene that the Russo Brothers, the film’s directors, were still making changes less than a month before the movie was released. Avengers: Endgame. They explained it in a questions and answers in Reddit. “We always wanted Sam Wilson to be the first to communicate with Captain America.”

“Sam was lost in Wakanda, so logically the first portal that opens is there. And the first person to go through it would be King T’Challa, along with his army, to defend the other superheroes in battle and to the whole world”.

Black Panther would have replaced Captain America after Avengers: Endgame

The scene of the portals in the final battle of Avengers: Endgame it was also a symbol game made by Marvel. The idea was that after the retirement of Steve Rogers / Captain America, Black Panther would be his replacement within the Avengers. In the end none of that could happen, since Chadwick Boseman passed away tragically in 2020.

Now that scene perhaps carries an even greater emotional weight, suggesting a future planned by Marvel and its cinematic universe, but which, unfortunately, will never happen.

That Black Panther is the first to go through one of the portals created by Doctor Strange during the final battle of Avengers: Endgame, gives us one of Chadwick Boseman’s best performances in the Marvel Universe before his unfortunate passing. He makes a small gesture to Captain America, very subtle, but enough to show the importance of a meeting of equals. A new leader arrives to assist another who needed a break.

Why Black Panther is the first superhero to reappear in ‘Avengers: Endgame’

The FIA ​​will release the film about F1 "When we were little"
The terror experienced in the Bataclan theater shocks the Berlinale with 'One year, one night', by I...
The horror movies on Netflix to start the month of Halloween