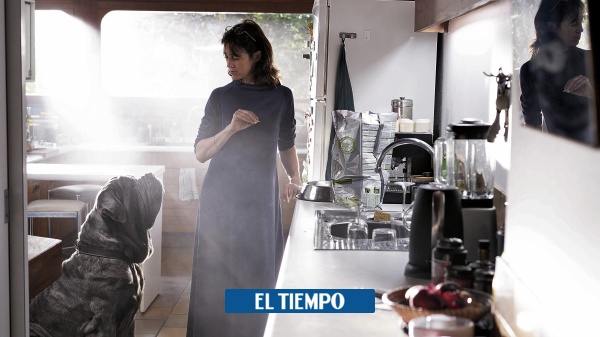 His name is Henri Mohen, 25 years ago he wrote a best seller, broke all sales records and won all literary awards. And since then he writes shit. His wife Cécile (Charlotte Gainsbourg) put up with him for 25 years, her beauty secret? A glass of white wine and a new antidepressant each day they were married. He bore him four children, whom he would have gladly traded in for a new Porsche. Because now he was certain that his depression, his lack of libido, his inability to write, were all the fault of his four children, who knew how to annoy him in all attempts at happiness. However, that stormy night, he still did not know that a great change was coming. Stupid, his dog, he was going to stay.

An unexpected tenant (in French Mon chien stupide, My stupid dog and based on the eponymous book by American writer John Fante) is the new film by French director and actor Yvan Attal. He himself embodies the protagonist, a writer who lives a strong personal and professional crisis. And his wife in real life, Charlotte Gainsbourg (Nynphomaniac), is Cécile, his wife in the movie. Cine Colombia gave the following interview with Gainsbourg:

How did you characterize Cécile, the protagonist’s wife? A woman who decides ‘not to give in to her desire’, to use Jacques Lacan’s beautiful phrase?

So exactly. A woman who seems to be subjected to a state of affairs, living with an unbearable, selfish, lazy and grumpy guy, who decides not to give in to his desire. In John Fante’s book, the woman is practically non-existent, she is a clueless, funny but secondary dog. Yvan has written a beautiful character, he has made me exist because I was in high demand!

After Ma femme est une actrice (My wife is an actress, 2001)
and de Ils se marièrent et eurent beaucoup d’enfants (They married and had many children, 2004), is again directed by her husband, Yvan. Do you see An Unexpected Tenant as the third part of a trilogy?

And our son Ben was already in Ils se marièrent et eurent beaucoup d’enfants … He was 6 years old. Yvan enjoys working with this autobiographical material, with what really bothers him: an official married life. I like his freedom, his way of twisting the material of private life, of creating red herrings. It makes fun of both of us and I like this uncompromising but not unloving look, I like this healthy way of transforming our flaws and ridiculousness into fiction … Very recently I discovered that Yvan had refused to adapt it to the cinema 20 years ago . I was not ready. Things happen at the right time in life, there is a magical moment that accompanies important projects.

I like his freedom, his way of twisting the material of private life, of creating red herrings. He makes fun of both of us and I like this uncompromising look but not without love

Is he a masochist? He affirms that he does, and that has led him to blacken his character …

He is not a masochist at all! I, on the other hand, yes. He is not a masochist, he is domineering. As for the dog, with whom he wallows throughout the film, it is a provocation or sadism towards his family because we have wanted a dog for 15 years and he does not want it.The film is quite crude in terms of family life, the weight of the children, the wear and tear of the partner, the disappointed expectations, the hatred of the spouse, the loss of libido … Do you assume it all?

I love it, I love that Yvan didn’t want to make it soft, consensual, politically correct with family, the ideal shelter, and other sweets. There’s no point in adapting Fante without being scathing. From this point of view, the film is dark humor, but it is human and sincere. And this Henri is obnoxious, but he has so much charm! I find it very endearing.

You perform with a very special partner, your son Ben …

When he filmed with us in Ils se marièrent et eurent beaucoup d’enfants, at the time, I was afraid of the direction of Yvan, who is very perfectionist and does not let anything pass. Yvan got what he wanted from Ben. Fifteen years later, An Unexpected Tenant was a real first for Ben, who enjoyed the performance. She played her role with grace and ease, despite her enormous stage fright.

On stage fright, do you feel it, after 35 years of career in the cinema?

Yes! I don’t trust myself. Stage fright can petrify me, I want to do it so well that it becomes suffocating. Especially when Yvan is directing. More than in front of the camera of Lars von Trier, for example. With Lars I wonder if I can live up to his expectations, but that does not question me as a woman or as a wife, there is no emotional interest. Filming with Yvan, mistakenly, no doubt, I have the impression that I am playing my role in our relationship! I want so much to be the best actress in the world for him that I accept all his criticism. The terrible thing is that he does not realize it at all. But I think that shows my love for him. I have heard that An Unexpected Tenant is a declaration of love from Yvan. But I’ve done a huge one too!

Yvan says he doesn’t direct you, he only evokes people who can nurture your character, like American writer Joan Didion …

Living in New York, I know what it represents. I saw that moving documentary about her; in fact, Didion’s solitary and free personality, his style so marked and timeless, inspired me. Yvan doesn’t direct me, but his way of being on stage is a barometer for me; In this I compare him with Lars, they are quite harsh in their perception of the actor’s performance because they perceive the accuracy, or the lack of it, and the accuracy is rare.

We get the feeling that all apprehensions were abolished during the joint scene, a moment of total surrender for Yvan and you?

There was a lot at stake in this scene, for the couple and their evolution. I lived it as a moment of absolute freedom and complicity, it is one of my best memories of the film. I felt incredible pleasure in letting myself go. It is the advantage of experience and, above all, of age, I don’t mind being ugly, I don’t mind being old. I don’t mind laughing and whinnying and squirming. I don’t care how I look in this context, it’s a liberation. During this scene, time stood still. We played shamelessly and it was definitely a liberation, but the look of the team as the first spectator counted for a lot.Do you prefer intimate scenes, even dramatic ones, or moments of comedy?

I panic about comedy because I don’t have a natural sense of its mechanics. Yvan takes me to comedy and I thank him because it is not my nature. The road to comedy is not easy for me, but I assume it.

Haven’t you forced yourself too hard to hate the Stupid dog, apparently?

It smelled so bad! It sucked. The strangest thing is that I saw Yvan fall in love with this beast. He was moved by the outcast whom nobody loves.

Is the movie finally a comedy?

It starts out as a gritty comedy and gradually evolves into a somewhat poignant existential drama about midlife crises. Yvan’s cynicism is actually a shame and a pain. You have to face those unspeakable feelings, the boredom with the children, the hatred of the couple within the couple despite love. From this point of view, I like Yvan’s courage.

Could there be a fourth movie, a sequel to this trilogy about the couple?

I could go on and on until I die!