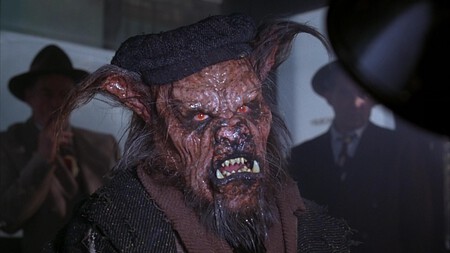 “It’s not TV, it’s HBO“. The name that has become synonymous with a way of understanding television. There are, of course, the great series that they have been making over the last decades, but their 50-year history is also linked to the cinema that they have been bringing and replenishing continuously.

Reruns have ended up becoming an alternative route for films that did not find luck in their theatrical release to become cult classics, and the brand HBO It has been key in that regard. But less celebrated have been some of the film productions made directly by the company in its commitment to original material. Today we rescue four outstanding throughout its history.

The first decades of original programming have given rise to a variety of productions, where projects that could not find viability in the film studio system have fallen. And from time to time it all came out a cult jewel like this amazing Martin Campbell film with the (relatively) recently deceased Fred Ward.

a movie of film noir completely transformed by the world of magic and fantasy, which inserted a crazy and cartoony sense of humor while still having the cynical edge that the noir genre requires. A pure, intriguing detective film capable of looking at the world with horror without giving up being fun. A unique and magical film.

Before streaming proliferated and people like Steven Soderbergh decided to exploit it as much as possible with constant production, the restless director already established relationships with the Home Box Office with this biopic of the Liberace story, the virtuoso pianist who for years hid his homosexual relationship with a handsome young man entering her dressing room.

Soderbergh dodges the stagnant tendencies and conventions of the biopic, launching himself towards show business, the vibrant image, the intense drama, without renouncing his extremely calculated and firm style. The story is really lush at certain points, but never loses the pulse and control of the storyexpanding the possibilities of the “television film” which is now an absolutely outdated concept.

One of those incredible indie gems destined to remain anonymous until HBO has given them a second chance (although they have also limited their options to higher aspirations, as in the case of Laura Dern for the Oscars). Despite going unnoticed, because falling into a catalog without being a spectacular proposal has those things, it is one of the best movies of its year premiere.

Jennifer Fox does a complex and thoughtful exploration of trauma, sexual abuse seen in retrospect, self-deception. Part confession, part creative daring that seeks to investigate in a state of mind of confusion and doubt, the proposal manages to be genuine and courageous despite the difficulty of the issues it wants to address. An outstanding Dern helps make it a must.

Jason Kilar’s move to Warners has tried to prioritize streaming and load HBO with assorted original content. Something that Steven Soderbergh has taken advantage of in a big way with several projects, being the best of all this superb visually daring paranoid thriller that seeks to create the definitive pandemic story that also survives the passage of time.

He gets it big. You don’t even need 90 minutes to do an elegant and conscientious job that will keep you perfectly entertained and speaks clearly of hypervigilance in times of intelligent assistants. Zöe Kravitz also manages to do a lesson in introverted charisma to give as much life as possible to a peculiar character, giving the final note to a fabulous genre exercise.

What to watch on HBO Max: 4 fabulous original movies to celebrate the 50th anniversary of the legendary network that changed television